“Jaws the Revenge” is not simply a bad movie, but also a stupid and incompetent one - a ripoff. And that’s a surprise, because the film is the fourth in a series that has served Universal Pictures long and well, and it stars Lorraine Gary, the wife of the studio’s chief executive officer. Wasn’t there someone in charge of assuring that the film was at least a passable thriller, however bad? I guess not.

The plot centers on the character of Ellen Brody, who, you may recall, was the wife of the Roy Scheider character in the first and second “Jaws” movies. Now she is a widow, and her son has his dad’s old job at the police department. The story opens at Christmas, as the son is eaten by a shark right off Martha’s Vineyard, while a children’s choir drowns out his screams with Christmas carols.

Mrs. Brody (Gary) flees in horror to the Bahamas, where her other son (Lance Guest) works as, you got it, a marine biologist. She pleads with him not to go into the water, but he argues that the great white shark has never been seen in warm waters. Not long after, the shark is seen, having made the trip from Martha’s Vineyard to the Bahamas in three days.

Mrs. Brody, meanwhile, falls in love with a local pilot (Michael Caine), and there is a subplot about how her son is jealous of this new man in his mother’s life. This jealousy, like every other plot device in the movie, is left unresolved at the end, but so what? The screenplay is simply a series of meaningless episodes of human behavior, punctuated by shark attacks.

Since we see so much of the shark in the movie, you’d think they would have built some good ones. They’ve had three earlier pictures for practice. But in some scenes the shark’s skin looks like canvas with acne, and in others all we see is an obviously fake shark head with lots of teeth.

The shark models have so little movement that at times they seem to be supporting themselves on boats, instead of attacking them. Up until the ludicrous final sequence of the movie, the scariest creature in the film is an eel.

What happens at the end? Ellen Brody has become convinced that the shark is following her. It wants revenge against her entire family. Her friends pooh-pooh the notion that a shark could identify, follow or even care about one individual human being, but I am willing to grant the point, for the benefit of the plot.

Here are some things, however, that I do not believe: That Mrs. Brody could be haunted by flashbacks to events where she was not present and that, in some cases, no survivors witnessed. That the movie would give us one shark attack as a dream sequence, have the hero wake up in a sweat, then give us a second shark attack, and then cut to the hero awake in bed, giving us the only thing worse than the old “it’s only a dream” routine, which is the old “is it a dream or not?” routine. That Mrs. Brody would commandeer a boat and sail out alone into the ocean to sacrifice herself to the shark, so that the killing could end. That Caine’s character could or would crash-land his airplane at sea so that he and two other men could swim to Mrs. Brody’s rescue. That after being trapped in a sinking airplane by the shark and disappearing under the water, Caine could survive the attack, swim to the boat, and climb on board - not only completely unhurt but also wearing a shirt and pants that are not even wet. That the shark would stand on its tail in the water long enough for the boat to ram it. That the director, Joseph Sargent, would film this final climactic scene so incompetently that there is not even an establishing shot, so we have to figure out what happened on the basis of empirical evidence.

There is one other thing I can’t believe about “Jaws the Revenge,” and that is that on March 30, Michael Caine passed up his chance to accept his Academy Award in person because of his commitment to this movie. Maybe he was thinking the same thing as the marine biologist in the movie: that if you don’t go right back in the water after something terrible happens to you, you might be too afraid to ever go back in again. 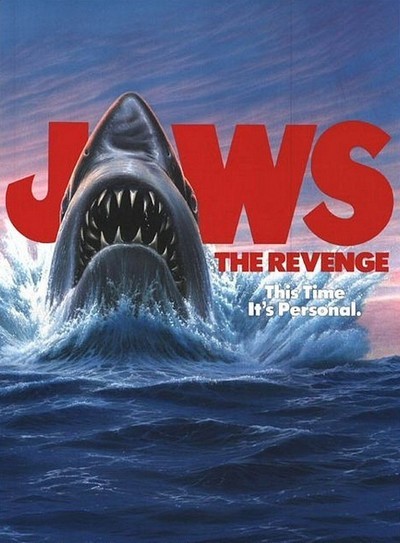