In his choice of characters, Robin Williams seems more comfortable playing soloists--people set apart by special skills or problems. Remember him in “Jumanji,” trapped in time. Or in “Popeye,” where “I yam what yam.” Or in “Mrs. Doubtfire,” crossing the gender line. Or consider his unclassifiable characters in “The Fisher King” and “Toys.” The closest he comes to a three-dimensional, grownup person is in “The World According to Garp” and “Good Morning, Vietnam.” Williams seems most at home in bodies that don't quite fit. Maybe that's why he had so much fun doing the voice of the genie in “Aladdin.” He must have been the first choice for Francis Ford Coppola's “Jack,” where he plays a boy who is aging at four times the normal rate. He is born, fully developed, after a two-month pregnancy, and at the age of 10 he looks exactly like a 40-year-old man.

The notion of a boy trapped in a man's body has been done before, by Tom Hanks in “Big,” for example. “Jack” brings it poignancy, because the situation isn't caused by magic, but by medical reasons; it's obvious Jack may not turn 20. (His condition is not inspired by a real disease, but was created by the filmmakers.) Williams works hard at seeming to be a kid inside an adult body, and some of his inspirations work well. But he has been ill-served by a screenplay that isn't curious about what his life would really be like.

Coppola brought great pathos to a similar situation in his “Peggy Sue Got Married” (1986), where a 43-year-old woman (Kathleen Turner) found herself inside her own teenage body. He found scenes that dealt truly with the crushing fact that we float on a current of time. In “Jack,” he and his writers, James DeMonaco and Gary Nadeau, go for more obvious payoffs.

The setup: As a device to make the story simpler and more dramatic, “Jack” is essentially kept out of society until he's 10. A tutor (Bill Cosby) comes to his home every day, and Jack has no ordinary contact with other kids. The movie explains this through the concerns of his uptight mom (Diane Lane), but finally the tutor and the dad (Brian Kerwin) prevail, and he goes to school.

Of course the other kids don't accept him. Well, why should they? He's got a receding hairline. (His dad teaches him to shave during the film, which seems odd, since by my calculations he should have been doing that since he was about 4.) When he sits down on his first day in fifth grade, the desk isn't big enough, it collapses beneath him, and my heart sank: Why would anyone the size of Robin Williams try to sit in a fifth-grade chair except to produce a slapstick gag? Eventually the kids accept him (he's a good basketball center), and then they find he has other uses--he can buy Penthouse, for example. But instead of using Penthouse as the springboard for observations about how boys that age are ambivalent to sex, the movie goes for a payoff in which a tree house collapses. (The next time I see a tree house collapse or a character fall through several floors of an old building, I'm going to fine the prop union.) There is one scene that works, is true, and does illuminate Jack's human dilemma. That's the scene where he gets a crush on his teacher (Jennifer Lopez) and plies her with a bag of red Gummi Bears before asking her to the school dance. (She's the only female in view who is tall enough to dance with him.) The way the teacher tactfully and gently handles this situation is an illustration of a path the whole movie could have taken, had it been more ambitious.

But “Jack” doesn't want to be a great movie. It only wants to pluck the usual heartstrings and provide the anticipated payoff. Far from being able to empathize with the thought processes of a 10-year-old, the filmmakers place him in situations they can imagine but a kid probably couldn't. I intensely disliked a subplot involving a schoolmate's trampy mother (Fran Drescher) that leads to a scene in a bar that doesn't work and doesn't belong, but does illustrate the ancient principle that every time there is a bar in a movie, there is a fight.

Who was this movie made for? Kids, maybe, who will like the scene where Jack passes himself off as the school principal (although the scene could have been written with smarter dialogue). But if this is a kids' movie, go for kids' reference points. Or if it's for adults, then it shouldn't have been constructed as a sitcom. My best guess is that the premise blinded everyone. Robin Williams is a 40-year-old in a 10-year-old's body? Great! When do we start shooting? If anyone dared to bring up the possibility of a better screenplay, he was probably shouted down: In the delirium of high concept, it doesn't pay to rain on the parade--no, not even if flowers might afterward grow. 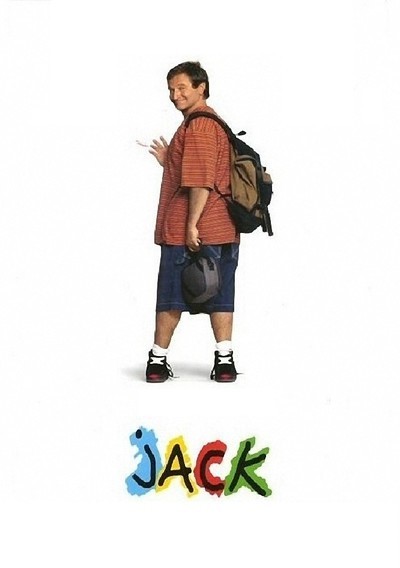