It's So Easy and Other Lies

“It’s So Easy and Other Lies” is a TV special (or DVD extra) about Duff McKagan’s live reading of his book of the same name, as accompanied by a band. It’s not revealing or dense enough to really qualify as a feature doc, as evidenced by its remarkably brief running time and superficial retelling of complex chapters from McKagan’s life. To call it a greatest hits version of the book wouldn’t even really be accurate as the film can’t stay focused on any chapter or anecdote long enough for them to resonate. And the movie has an undeniable black hole at its center in the fact that it barely mentions Axl Rose, and includes no original Guns N' Roses recordings (although the band does play instrumental versions of songs like "Paradise City" and "Nighttrain"). McKagan reads passages from his book and performs songs in front of an audience, and that serves as the foundation of “It’s So Easy and Other Lies.” I would have much rather just watched a concert film of that event than the documentary that Christopher Duddy tries to shape from it.

Of course, “It’s So Easy and Other Lies” opens with the word “fuck” and some guitar riffs. It kind of legally has to, right? As the personable and incredibly talented McKagan reads chapters from his book, Duddy intercuts them with old photos, footage of Duff riding around L.A., interviews and even animation. It’s a cluttered approach that feels desperate to please and almost manic. For the next seventy minutes or so, this style rarely changes, as the film flits from subject to subject. We learn about when Duff met Slash. We hear about McKagan’s early bands (some with names like Thankless Dogs, Cleavage and The Fartz). We get a bit about how Seattle drug culture was killing some of the biggest names in music. Although any music fan who sees “Andrew Wood RIP” followed by “Layne Staley RIP” and then hears the line from McKagan’s book “and the grunge thing didn’t happen until like ten years later” will know how haphazardly the film has been edited together (Wood died in ’90, Staley in ’02, grunge “happened” in between). It may sound like nitpicking but it’s an example of how unfocused the movie can feel.

There are also elements of McKagan’s writing that are easily forgivable as we speed through the book but less so when read aloud. Lines like “The whole world is vibrating with anger from within … and, more ominously, from without” don’t do the production any favors. Most frustratingly, Duddy and McKagan SPEED through the Guns N' Roses years, probably because they knew its degree of difficulty without the actual music. About Axl Rose, we hear McKagan say “I liked him right away,” and then praise his voice, and that’s about it. McKagan talks about hearing Axl scream for the first time, and we don’t hear it. It made me want to pause the movie and go listen to Appetite for Destruction again (and I’m not saying I didn’t do that). The long history of the drama of GNR is well-recorded, but you can’t really tell McKagan’s story and treat it like a footnote. When someone says late in the film, “We could talk about McKagan a lot and not talk about Guns N' Roses,” he’s not quite right. And when the film focuses more on Velvet Revolver than GNR, it’s impossible not to feel like the balance is off.

41 minutes into the film, McKagan starts actually singing—“Knockin’ on Heaven’s Door,” one of two songs GNR recorded that they were allowed to use, and the other is also a cover, proving that original lyrics were clearly a no-no—during a particularly rough flashback about when his pancreas exploded during a time when he was so deep in his addiction that he barely noticed at first. I would have watched a lot more of that. I imagine the live show, interspersing the readings and live music, is more powerful by having both. By reducing it to just a few lines from the book and editing in everything else, all of it is diminished: the music, the book, the true story. And when the movie essentially ends 30 minutes later (it’s filled out to a more reasonable film running time with an actual musical performance—“You Can’t Put Your Arms Around a Memory,” a New York Dolls cover that GNR did on “The Spaghetti Incident”), we’re left wondering what we’ve learned. Duff McKagan is talented, smart and nice. He went through some deep shit with his addictions and came out stronger and happier, with a beautiful family. And he was in one of the best bands of all time. His story deserves a better movie. 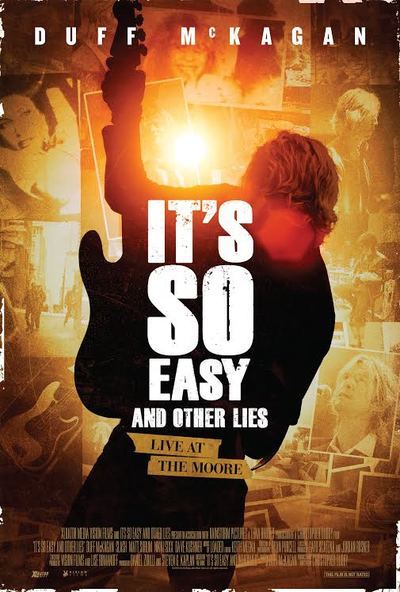 Duff McKagan as Himself

Nikki Sixx as Himself