It Happened in L.A.

Considering the state of the modern American comedy, it’s noteworthy when any filmmaker attempts to craft a film that isn’t either a) an improv-heavy Apatow-influenced affair or b) a feel-good indie that neither surprises nor impresses. So, credit where it’s due: “It Happened in L.A.,” originally titled “L.A. Times” when it premiered at Sundance earlier this year, doesn’t fall into either of the two aforementioned categories. Writer-director-star Michelle Morgan styles her comedy of manners after her hyper-articulate predecessors, like obvious and credited influences Whit Stillman and Woody Allen. Her script splits the difference between cynical and sanguine, and refuses to indulge in empty sentiment. She mostly employs neatly composed static shots that highlight negative space and production design, memorable if only because many comedy directors don’t even consider framing. For better or often worse, “It Happened in L.A.” has a vision.

With that said, Morgan doesn’t offer any particularly clever or novel insights to support that vision. The neurotic, vaguely dissatisfied relationships in the film are thin and unoriginal, despite updates in employment—one character writes for a “Game of Thrones”-esque show, another works in “online media content distribution,” everyone moonlights as a writer, etc. While the Stillman-cum-Allen influence provides some formal spark, it also frequently suffocates the proceedings (Morgan’s character, especially, speaks like the Stillman lead of your choice to a distracting degree). It’s not a mess, but it still feels like one anyway.

The plot, in miniature: Annette (Morgan) impulsively breaks up with her boyfriend of five years Elliot (Jorma Taccone) because she believes they aren’t happy. She sees her other satisfied couple friends and believes they don’t match up because they bicker about preferences and such. Meanwhile, Annette’s best friend Banks (Dree Hemingway) flounders in the L.A. dating scene; she struggles to break it off with the sometimes-sweet-otherwise-a-dick Tom (Tate Donovan) and gets entangled in a complicated rigmarole with her cousin Peter (Kentucker Audley, easily the best of the main cast). After the breakup, Elliot frequently sees local prostitute Ingrid (Margarita Levieva), whose disaffected attitude intrigues him more than the eager young extras that work on his TV show.

“It Happened in L.A.” drops in and out of the characters’ lives, capturing them in brief vignettes as they deal with and talk through their problems in a recognizable self-aware manner. It doesn’t build to any artificial conclusion, nor does it operate on any hyperlink frequency where every character knows each other somehow, but its central thesis still feels pretty well worn. Morgan argues that true happiness doesn’t come in neat packages, and a certain amount of friction, or even dissatisfaction, in a relationship staves off boredom and invites rewarding challenges. Moreover, judging oneself against the perceived success of others only invites misery. Annette flails when her backup guy shows no interest beyond a one-night stand, and Elliot’s affection towards Ingrid quickly curdles when she begins to show true devotion to him. In other words, they’re made for each other, warts and all.

It’s not that Morgan’s views on relationships are wrong (far from it, in fact), but they’re hardly illuminating. Thus, “It Happened in L.A.” becomes a bit of a slog as Annette, Banks, and Elliot slowly realize that satisfaction doesn’t only take one form and that performative joy often masks other difficulties. When we finally arrive at the film’s final scene, complete with a statement of purpose and a snarky rejoinder, it feels like a longtime coming.

Still, “It Happened in L.A.” isn’t without its charms. Morgan does infuse the film with amusing, period appropriate details about modern L.A. life—near constant board game nights, cell reception difficulties, and a brief, funny runner about a Brazilian horror producer who has seemingly promised every wannabe writer that he’ll produce their script. She also doesn’t treat Annette’s strident, frequently patronizing behavior as a provocation, but something that’s been accepted by her friends. There’s a late cameo appearance by James Ransone that provides the actor the opportunity to briefly walk away with the film. Other than that, however, there isn’t much else to recommend. “It Happened in L.A.” aspires to be the kind of film that I love, and it’s frustrating to watch it fail to reach those heights. 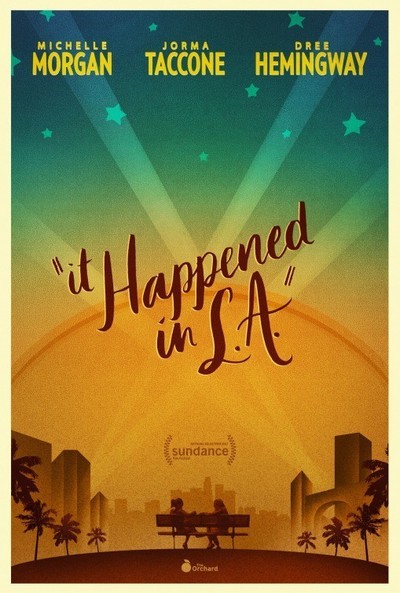