Multiple “wow” moments permeate the landscape of “It Chapter Two” like so many ominous, red balloons floating across a New England summer sky.

Some will make you say “wow” for the sheer daring of their surrealism and the startlingly graphic nature of their execution. Others will make you say “wow” because they really do not work. Either way, director Andy Muschietti has absolutely gone for it with the sequel to his 2017 smash Stephen King adaptation, taking big swings and displaying both a muscularity and an elegance to his craft.

And given that his film stretches nearly three hours, he gets more than ample opportunity to show off all those tools. “It Chapter Two” can be a sprawling, unwieldy mess—overlong, overstuffed and full of frustrating detours—but its casting is so spot-on, its actors have such great chemistry and its monster effects are so deliriously ghoulish that the film keeps you hooked. You won’t check out entirely, but you will check your watch several times.

In adapting the second part of King’s nearly 1,200-page tome, returning writer Gary Dauberman is in a tricky spot: What to keep? What to cut? He does a bit of both while also incorporating moments from the first film as well as new scenes featuring the characters as kids to fill in some gaps. As in the original, “It Chapter Two” works best when the members of the self-proclaimed Losers Club are bouncing off each other, their banter infused with a sparkling mix of hormones, humor, insecurity and camaraderie. Unfortunately, Muschietti and Dauberman spend a lot of their time keeping their perfectly picked actors apart on individual adventures, which drags out the drama and slows down the momentum.

Just as the ending of the first film foreshadowed, though, the kids who escaped the villainous grasp of the evil clown Pennywise during the summer of 1989 have found themselves back in Derry, Maine—right on cue, 27 years later, to fight him again. They’d all gone their separate ways and carved out vastly different lives, and in introducing us to these characters as adults, Muschietti makes some gorgeous transitions that are smooth and inventive. But returning to their seemingly idyllic small town instantly revives their old rhythms and relationships.

Mike Hanlon (Isaiah Mustafa as an adult, Chosen Jacobs as a child) is the only one of the bunch who stayed in Derry; he’s the self-styled historian and the one who makes the fateful phone calls to round up his old pals when Pennywise resurfaces. Bill (James McAvoy/Jaeden Martell) has gone on to become a novelist whose latest book is being adapted into a film, one of several meta bits scattered throughout. Beverly (Jessica Chastain/Sophia Lillis), who endured a controlling, abusive relationship with her father, is now in a controlling, abusive relationship with her husband. Richie (Bill Hader/Finn Wolfhard) is a hard-drinking, trash-talking stand-up comic who’s as acerbic as ever. (Hader’s performance is the highlight within this terrific ensemble as he shows off his perfect comic timing as well as his deep dramatic chops.) Eddie (James Ransone/Jack Dylan Grazer) remains a neurotic hypochondriac who’s married to a woman who looks and sounds an awful lot like his smothering mother. And Ben (Jay Ryan/Jeremy Ray Taylor), who was both the poet and the brains of the group, shed his baby fat and transformed himself into a hunky, wealthy architect. Other than that, his defining character trait is the secret crush he still has on Beverly nearly three decades later; it grows a bit tedious.

Perhaps the best scene in the whole film is the one in which they all reconnect for the first time over a boisterous, boozy dinner at a Chinese restaurant. They spin the lazy Susan, down shots of liquor, tease each other mercilessly and find it’s as if no time at all has passed—even though the memories of the trauma they shared are hazy at best. “It Chapter Two” is at its strongest when it explores the lure of nostalgia, not merely through pop culture references like “The Lost Boys” and Cameo’s “Word Up,” but also in the cosmic way it can yank you right back to being the person you were long ago and never thought you’d be again. That unsure, evolving 13-year-old remains inside all of us, no matter where we go or what we do.

Pennywise, however, has stayed the same all this time—and Bill Skarsgård’s deeply creepy presence is sorely missed when he’s off screen. With a performance that’s as physical as it is verbal, he consistently manages to find that sweet spot between being terrifying and hilarious. He’s created an iconic horror villain for the ages. But the rules seem to be ever changing as to what Pennywise can achieve with his supernatural abilities. He knows what scares these characters, even as adults, which often manifests itself in strange, vivid ways. It’s the stuff of nightmares, even when they’re wide awake in broad daylight. But his omniscience and omnipresence tend to vacillate, and the collaborative power that ultimately challenges him isn’t too different from what we saw in the climax of the first movie.

First, though, the members of the Losers Club must spread out across town and find totems from their youth as part of a ritual to purge Pennywise from existence; they do it at Mike’s insistence, part of the Native American subplot that also exists in the source material. It’s absurd and it’s a distraction; excising this element of the story would have made the film as a whole leaner and stronger. But while separating the characters significantly lengthens the running time, it also results in individual moments of insane terror, most notably the expertly staged and paced scene in which Beverly revisits her childhood apartment. What she finds there is one of those “wow” moments—you’ll laugh out loud in hopes of alleviating some of the excruciating suspense.

Eventually, though, you’ll also come to realize that Pennywise gets a little repetitive with the frights he inflicts upon his victims. They’re of a few varieties: They’re staggering, slurping zombies, or they’re somehow spider-related, or they involve gallons of water or blood. (Henry Bowers [Teach Grant/Nicholas Hamilton], the mulleted bully from the first film, also returns to do his cruel bidding in a way that feels contrived and superfluous.) But as “It Chapter Two” shows us, not only can you go home again—you sorta have to. 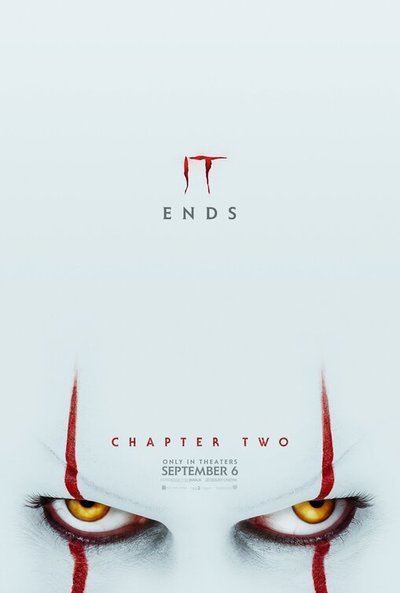