Movies about the legendary martial artist Ip Man have become their own small industry. Wong Kar-Wai’s “The Grandmaster” is the best of the recent works about the Foshan-born icon, but Wilson Yip’s “Ip Man” series is tough to beat for charm and verve. Yip started his career as an irreverent genre re-upholsterer, making violent, punk genre films, the most famous of which is like 1998’s “Bio Zombie.” In 2005 he met and began working with Donnie Yen and settled into a more conventional rhythm and style, his mise-en-scene broadening to take in the balletic performance of his star. When they made the first “Ip Man,” with the incredible Sammo Hung handling fight choreography, it became an instant sensation. The film treated Ip Man as a humble folk hero who liberated the people of his province by teaching them to defend themselves with Wing Chun-style kung fu from greedy bosses and the invading Japanese army in the lead up to the Second World War. A sequel was rushed into production that featured Hung in a supporting role and took even more money at the box office. By the time “Ip Man 3” hit theaters (grossing $157 million dollars against a $36-million-dollar budget) the movies' formula had solidified into a showcase for some of the world’s most famous mixed martial artists. “Ip Man 4: The Finale” is apparently going to be the last time Yen dons the familiar black cassock to play Ip Man, and Yip orchestrates a fittingly spectacular finish to the saga.

When we last left Yip and writer Edmond Wong’s version of Ip Man, his wife had died of cancer, leaving him to raise his son (Ye He) by himself. Man’s fortunes decrease further when he learns that he too has been diagnosed with cancer (it would kill him in 1972) which means he only has a limited time to ensure that his son’s life takes the right turning. He flies to America at the behest of his most famous student Bruce Lee (Kwok-Kwan Chan) and uses the opportunity to look for a good school for his boy. Immediately, trouble finds him. He’s called to a meeting of the heads of martial arts schools in America, thinking he’s just being shown hospitality as the world’s most renowned Wing Chun practitioner. But it turns out they’re all furious about Bruce Lee teaching kung fu to westerners. The head of the Tai Chi school, Wan Zong Hua (Yue Wu), demands Ip Man put a muzzle on Lee and he refuses, believing that everyone should be able to practice the art form if they so choose. Their disagreement almost comes to blows. Things go no more smoothly for Ip Man in the coming days. His visit to a prestigious school ends with the admissions officer saying that short of a 10,000 dollar donation or a letter of recommendation from other prosperous Chinese emigrants (like Wan Zong Hua, for instance), his son will never get into a decent American school.

While he’s touring the grounds, he notices Wan Zong Hua’s daughter Yonah (Vanda Margraf) being bullied by a white cheerleader (Grace Englert) and comes to her rescue, which starts the Tai Chi master on the path of recognizing Ip Man as a more principled man than he initially gave him credit. They’ll need each other in the coming days because when that cheerleader tells her parents she was attacked by Chinese people, they involve INS and the military in their efforts to try and oust the Chinese from the area. As it happens there’s a Gunnery Sergeant named Barton Geddes (Scott Adkins) who’s been itching for a way to put the local Chinese in their place, and this is all the pretext the virulent racist needs to start cracking skulls.

Yip’s “Ip Man” films are constructed like golden-age Hollywood musicals or “Step Up” movies, and as they were never going to be perfect history (four movies come and go without a single mention of Ip Man’s illegitimate child), this is a wise and welcome decision. There’s little plot, a new character is introduced, and then there’s a jaw-dropping sparring scene. The great Yuen Woo-Ping steps in to replace Sammo Hung after “Ip Man 2” and his work here is typically jaw-dropping; as beautiful as it is nerve-wracking. Yuen Woo-Ping also directed this year’s similarly rich “Master Z: Ip Man Legacy,” following Zhang Jin’s character from “Ip Man 3,” and is planning a sequel as we speak, a small comfort to fans of these film’s winning aesthetics and gorgeous choreography.

Having already traded blows in show stopping duels with Sammo Hung, Mike Tyson, Darren and Shahlavi among others, Donnie Yen shares lovingly orchestrated fight scenes with martial artist Chris Collins, Wu and finally Adkins in “The Finale.” There’s also room for Chan’s Bruce Lee to show off in a back alley brawl with some racist Karate experts. Chan’s Lee impression is truly wonderful, perfectly capturing his swagger and his signature body language. He’s almost charismatic enough to steal a little of Yen’s thunder. Yen, the Fred Astaire of kung fu, is finally beginning to look somewhat his age, which adds poignancy to his performance and adds no little extra tension to his fight scenes; can he still defeat his opponents as handily as he used to? His scene with Adkins, especially, is a nail-biter. Adkins isn’t usually framed by other directors to emphasize his relative enormity as so much of his screen persona revolves around him being underestimated by his opponents. Here he’s a tank, swift and sledgehammer-hard, and you genuinely worry about Yen’s body standing up to Adkins’ legwork and formidable fists. It’s one of the few times in the four “Ip Man” movies that it feels like the filmmakers aren’t stacking the decks in their hero’s favor.

To go with the film’s musical dramatic structure, Yip and Johnny To’s regular cinematographer Siu-Keung Cheng create a world alive with brilliant color and ornate design. This feels at times like a Stanley Donen or Li Han-hsiang movie, with precise framing of weightless bodies in wonderfully lit presentational spaces. Yip’s maturation from his early Category 3 days to one of the most dependable directors of martial arts has been most rewarding because he’s realized that being a more serious director doesn’t mean losing vibrancy. The first two “Ip Man” movies had sombre, reserved color palettes, grey and brown to match the depressive mood of pre-and-post-war China. In “The Finale” Yen’s signature black clothing can’t help but stand out against the neon set design. Yip seems like he’s having as much fun with every single production element here, as opposed to just saving his energy for the death-defying combat sequences. Kenji Kawai's music is still too emphatic for its own good, but when the dancing’s this good, the tune hardly matters.

The “Ip Man” movies have always been nationalistic triumphs, with Yen as the savior of the downtrodden, protecting China from the tyrannical Japanese in the first film, and then from Americans, and from the avaricious character they brought to China in the latest two. “Finale” leans hard into the series’ anti-racist message, turning Adkins sadistic sergeant into a mouthpiece for Trump-era bigotry (Adkins is the best actor among the villains; the sadistic cheerleader and her family seem to be reading their lines phonetically). Slowly the enmity the other masters feel toward Ip Man dissolves because there’s greater threat to their way of life than Lee. It’s a clumsily delivered but deeply felt message of cooperation in trying times and surely there’s no bad time for such a thing. Through four movies now Yen’s beatific kung fu master has taken punches for every kind of person, helping others by staying his best self in a violent world and only resorting to violence when it’s absolutely necessary. Yen’s Ip Man will be sorely missed if this is indeed his last match, but at least he walked into the sunset on an exuberant and heartfelt note. 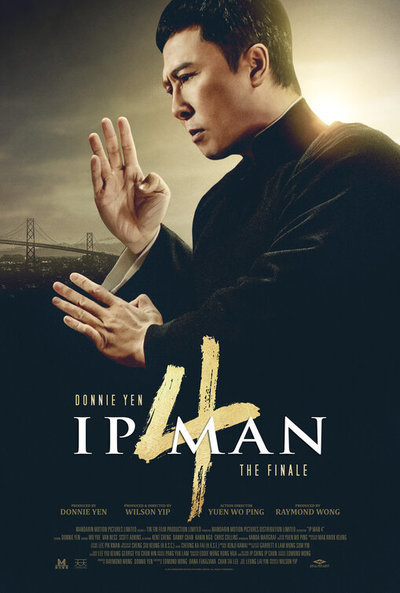