“Intruders,” once called “Shut In” on the fest circuit, is an effective home invasion thriller with interesting performances and tight pacing … until it’s not. Like so many genre films, “Intruders” can’t quite figure out its final act, and this one devolves from a thrilling predator-and-prey game into something closer to “Saw.” Director Adam Schindler is better with actors than a lot of young horror directors—resulting in the tightness of that first half—but can’t quite get a handle on where the movie needs to go from there. The result is a promising film that leaves a bad taste in your mouth, like a meal well-presented on the plate that just doesn’t fill you up.

Anna (Beth Riesgraf) is an agoraphobic young woman who hasn’t left the family house in a decade. Her brother Conrad (Timothy T. McKinney) is her only companion, but he’s dying in the film’s opening scenes. A nice Meals on Wheels guy (Rory Culkin) is one of Anna’s few connections to the outside world. These opening scenes define Anna’s world well, and Riesgraf is very good in them, conveying someone who’s actually more scared of going out her front door than anything that might come through it. After her brother’s passing, Riesgraf deftly conveys Anna’s crippling fear, agoraphobia so bad that it keeps her from even going to the funeral.

And that’s when the problems start. Three guys (Jack Kesy, Joshua Mikel and Martin Starr) who presumed that Anna would be out of the house break into it to rob the place. Anna is still home, dressed up for the funeral but unable to will herself to go. At first, it looks like “Intruders” may play out like “Panic Room,” as the home invaders realize that someone has altered their plans. However, it’s not long before the tables are turned, leaving the men in a basement that’s, well, not your average lower floor. It turns out that Anna has a dark family history and the men who thought they could steal her family fortune are about to confront it.

While the three criminals who bust through Anna’s front door are relatively and predictably defined—one killer, one peaceful guy, one leader—the cast and setting sell the action. We believe Anna is so crippled by fear that her captors don’t even think they have to tie her up to stop her from escaping. The filmmaking in this first act is lean and tight, ably propelled by Riesgraf and the always-great Starr, playing against type here as the maniac who wants to plunge a hammer into Anna’s head. I could do without the shaky camerawork to capture Anna’s fear (the actress is good enough that the trick is unnecessary), but I was down with “Intruders” until a major incident at the 30-minute mark completely changes the stakes and dynamic.

Even then, “Intruders” doesn’t completely fall apart. It just gets repetitive and even ugly. There’s a lot of use of the word “bitch” and close-ups of violence. As the piece becomes more “Saw” than “Panic Room,” the characters disappear and we’re left with too little to hold on to. Schindler can’t handle the gore effectively, as scenes like the one in which blood pours onto Anna’s face just feel gross. It doesn’t need to be that ugly of a film. Don’t get me wrong. I don’t mind gore at all. It just has to feel purposeful, and it doesn’t here. And then the final 15 minutes are of the “that only happens in a horror movie” variety, revealing that the psychological elements of the piece have always been mere window-dressing.

People are not so easily defined as we’ve been led to believe. Just because Anna is a shut-in doesn’t mean she’s weak. And just because her home invaders are hammer-wielding tough guys doesn’t mean she can’t turn the tables on them. That’s the aspect of “Intruders” that works, and the foundation on which the rest of the film should have been built instead of inconsistent characters and shock value. You could do a lot worse for a horror VOD rental this weekend (or even a trip to the theater if it’s near you given the abysmal January competition), but you still won’t shake the feeling that “Intruders” should have been a lot better. 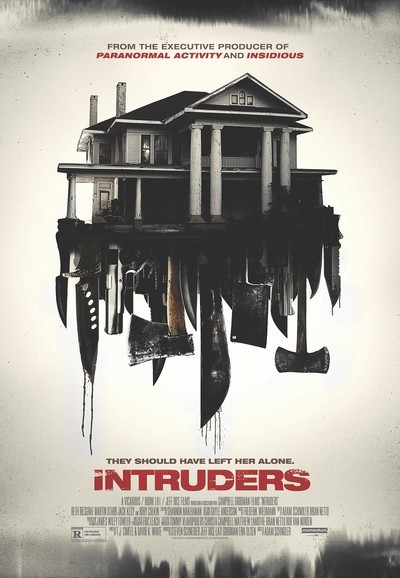