Selma Blair needs no introduction. She’s been a singular presence as a standout supporting actress for decades, with indelible performances in “Cruel Intentions,” “Legally Blonde” and the “Hellboy” franchise among her many film roles. There’s a certain pleasing spikiness about her persona—she’s at once playful and tart, with an alluring androgyny to her sharp, striking features.

And yet we get to meet Blair anew—and she comes to know and eventually embrace a different version of herself—over the course of the documentary “Introducing, Selma Blair.” Working with director Rachel Fleit, Blair gives us an intimate, unflinching look at her life as she struggles through the debilitating symptoms of multiple sclerosis, a diagnosis she received in 2018. We also follow her as she strives to continue parenting her young son, Arthur, and travels to Chicago for the stem-cell transplant she hopes will provide relief.

It’s a lot, especially as Blair makes herself increasingly vulnerable and provides a window to her pain and fear through both the raw video diaries she shoots herself and the unvarnished moments she allows Fleit to capture. (The filmmaker has alopecia, an autoimmune condition that causes hair loss; both her sensitivity and sense of humor shine through in her documentary feature debut.) “Introducing, Selma Blair” is frequently a tough viewing experience, and it should be. What is the documentary form if not a mechanism to show us the truth of how others live? The honesty on display here is crucial, both for people who have no idea what multiple sclerosis is and for those who may be suffering themselves from the disease, in which the immune system attacks the protective covering of the nerves.

But whenever the film seems be on the verge of turning maudlin, Blair shifts the tone through some biting, self-deprecating quip that instantly lightens the mood. Her self-awareness, and her frequent willingness to laugh at herself in the saddest situations, cut the tension. When we first see her, she’s donning a turban and applying severe makeup to dress like Norma Desmond for an interview at her Studio City, California, home. She uses this flair for the dramatic to disarm us throughout. But what’s truly compelling—devastating, actually—is the transformation she allows us to witness as she sits in a cocoon-like red chair and describes her condition. A sweet, white terrier mix snoozes contentedly in her lap. At first, she cracks snappy jokes about the importance of walking with a stylish cane and speaks eloquently about how she hopes her illness will inspire her to become a better person in her late 40s. But the second her comfort dog hops off and scampers away, we can practically see the mask fall. It’s as someone flipped a switch. Suddenly her speech is halting and slurry. She’s twitchy and self-conscious. “Now the fatigue happens,” she strains to articulate. It’s painful for her and for us as viewers, but she wants us to see this, because this is her reality. Eventually, a whimper: “I don’t have anything more,” she concludes.

Just as illuminating are the moments she shares with her son, for whom she gives every bit of energy in her body to have an impromptu dance party or a game of dodgeball. When he tells her around age seven that he’s frightened of what she’ll look like without hair—because she must undergo agonizing chemotherapy in preparation for the stem-cell treatment—she makes the most inspired and terrifying mom move I’ve ever seen by handing him scissors and clippers and letting him trim it off himself. (My kid’s almost 12 and I wouldn’t let him anywhere near my head with a pair of scissors.) These moments may seem superficially uplifting, but they carry an undercurrent of melancholy—as is true so often throughout the film—because they so clearly reflect Blair’s intention to be a totally different kind of mom than the one she had. She’s candid about the darkness and rage she believes she inherited from her hypercritical mother, and to learn that she’s doubted herself all these years is heartbreaking.

But because Fleit has captured so many powerful and enlightening moments, it makes you wish she hadn’t relied so heavily on music to punctuate them. When Blair is goofing around with a cane in the hospital corridors, for example, a jaunty tune accompanies her strut. Conversely, an inspiring melody swells as Blair comes to a conclusion about what matters in life, or her newfound drive to make others suffering like her feel less alone. The emotions conveyed in these scenes have to compete with the score, with creates a distraction and drains them of their impact.

Still, it’s impossible to watch “Introducing, Selma Blair” and not feel deeply moved. Whatever happens from here—whether she returns to work as an actress, and hopefully she will—she’s already accomplished her goal of using her platform to shine a light on what it’s like to live with a disability, and she’s done it with her signature style and grace.

Now playing in theaters and available on Discovery+ on October 21. 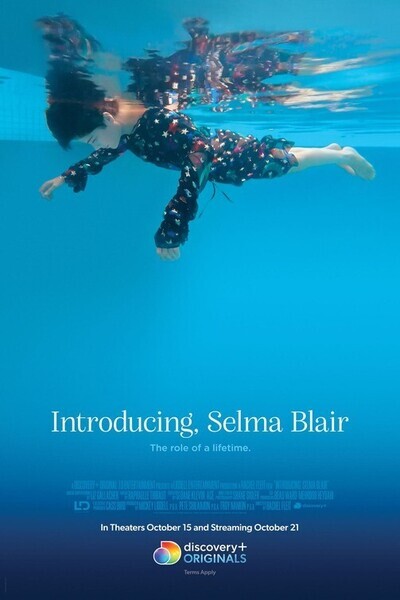 Selma Blair as Self