Into the Dark: The Current Occupant

A new low point for the relatively stronger second season of Hulu and Blumhouse’s series of original films, “Into the Dark: The Current Occupant” takes an already-thin idea and hammers it into a numbing, aggressive, ugly paste and then force feeds it to you. A movie about a man who believes he might be the President of the United States that plays with the concept of increasingly out there conspiracy theories that seem to sprout up on the web like weeds might sound like fertile ground for original filmmaking in Summer 2020. Director Julius Ramsay and his team have no idea what to plant in that ground, and so they just jump up and down on it for 85 minutes and hope you won’t notice that they haven’t put together enough story for an episode of “Tales from the Crypt,” much less an entire film. The state of the world has us all on edge in July 2020, but rather than play with that increasing anxiety and paranoia, “The Current Occupant” will only make you angry.

Barry Watson of “7th Heaven” fame plays a man named Henry Cameron, a resident of one of those movie psych wards with no windows and the kind of creepy orderlies and doctors who appear to have gotten medical training by watching B-movies. Cameron has physical ailments that are healing but his mental predicament remains: he has no memory of who he is or his life before the hospital. A doctor named Larson (Sonita Henry) proposes an aggressive treatment that will supposedly remind Henry of his identity, although it’s incredibly unclear how the “Clockwork Orange”-esque torture sequences she monitors would do anything but drive someone insane. It feels like at least half of the running time of “Current Occupant” consists of these hyper-edited “therapy scenes” and they may slowly convince you that you’re someone else, or at least someone not watching this movie.

After a therapy session, a new resident tells Henry that she recognizes him, and a kind nurse named Eliza (Kate Cobb) whispers something in his ear. Henry starts to believe that he’s actually the President of the United States, who survived an assassination attempt but is being held captive in a psychiatric bunker under the White House by a power-hungry Vice President, who he believes is a shady man in black (Ezra Buzzington) that has been seen around the facility. The woman who first recognized Henry claims to be his Secretary of State and reveals that the world thinks he is on life support but he’s really being brainwashed by the doctor’s techniques. Is Henry someone with mental issues who comes to believe he’s the President or actually the world leader being trained to think that he’s not completely sane?

It becomes impossible to care about the answer to that question because “The Current Occupant” drags out its answers way past any logical breaking point. The film simply crumbles under the weight of having to carry so little story past a sane running time of 30- or 60-minute anthology television, repeating so many ideas and scenes that it becomes numbing, even by the time it gets to ECT, at which point you might need some therapy of your own. The “scary hospital” scenes have about as much as tension as a Korn music video, and by the time the doctor literally hands our protagonist a folder to explain the plot, you may have gone so insane that you think you’re the President too. 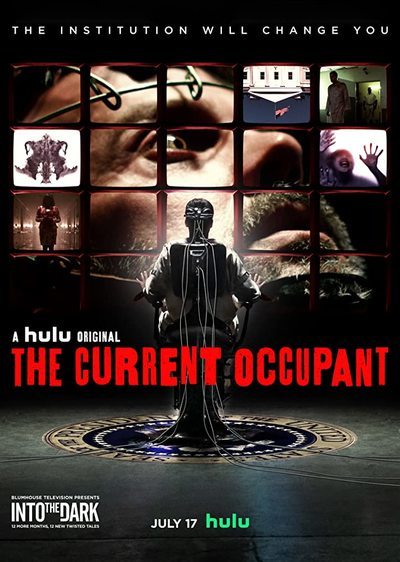 Joshua Burge as The Emperor