Into the Dark: Pilgrim

One of my issues with the “Into the Dark” series is that there hasn’t been enough risk-taking within this monthly horror offering. If you think about it, this is precisely where crazy stuff should go down. It’s where Jason Blum should allow creators to play with form and tone and genre in ways that the requirements of box office don’t often allow. Let’s get nuts! Sadly, most of the original “Into the Dark” movies have been anything but nuts, often stretching thin concepts directed by people without nearly enough visual flair or willingness to take risks. The most interesting and acclaimed films in the series (for example, “Culture Shock” and “Pooka!”) have felt original and unlike anything else playing in theaters or even on Shudder. Whatever you may say about how Marcus Dunstan’s “Into the Dark: Pilgrim” comes together or fails to do so, it is legitimately crazy, a movie that pushes boundaries of taste and tone in ways that I hope more of these do in year two.

One of the things I like about “Pilgrim” is that it actually embraces the concept of “Into the Dark,” in which each month’s entry is about the biggest holiday of it, but many of these have barely even alluded to any special occasion. That is not the case with “Pilgrim,” which uses Thanksgiving as a twisted starting point for a story of insanity and the spoiled behavior of the rich and out of touch. What starts as the story of a blended family that’s not blending too well devolves into a grisly, gory movie that someone like Herschell Gordon Lewis would have liked. You can’t say that about any other “Into the Dark.”

Anna (Courtney Henggeler) is one of those suburban housewives trying to find a new way to entertain herself. The subtext that wealthy people often do ridiculous things in an effort to be different is there when she reveals to her family that she’s signed up for a service in which cosplayers recreate the first Thanksgiving. If you think inviting fired Renaissance Faire workers into your home to cook you a turkey is a bad idea, Cody (Reign Edwards) would agree with you. Her brother Tate (Antonio Raul Corbo) is young enough to play along while dad Shane (Kerr Smith) is too perpetually distracted to really care. One gets the impression he’s one of those dads who just smiles, nods, and opens the checkbook for his wife on regular occasions.

And then the doorbell rings. A man named Ethan (Peter Giles) and a woman named Patience (Elyse Levesque) are on the doorstep in pilgrim garb, and it’s not even Thanksgiving yet. It turns out that they’re going to be living with the family, reintroducing them to Pilgrim culture. If you’re thinking this all sounds a little silly, writers Dunstan, Noah Feinberg, and Patrick Melton wisely lean into the B-movie insanity of it all, never taking the concept too seriously. Ethan builds a shed in the backyard and Patience angrily churns butter. Cody senses early on that something is very wrong with these two. And then she’s proven right.

A film like “Pilgrim” requires a totally committed leading man, and Giles is legitimately excellent here, conveying a menacing sense of puritanical fury right from his first appearance. He devours lines like “You will learn to appreciate,” long before we know exactly what that means. And the writers are smart to never really connect all the dots as to what the heck is going on here. Are Ethan and Patience merely sociopathic costume actors, people so committed to their characters that they’ve lost their minds? There’s a wonderful undercurrent about Ethan having a traumatic past that has led to his desire to punish those who take for granted that which they have. I actually wish this had been explored a little more—the idea that Thanksgiving, and most American holidays, have been turned into lavish, expensive affairs, and drifted away from their "true meaning." This is one of the best chapters of “Into the Dark” because it actually has something to say about the holiday it uses.

Well, that, and because it gets really gnarly. While the first hour may be too much of a slow burn for some, never fear. This one gets insane with body parts and gore, but never loses its clever sense of humor (“Did we just murder ... as a family?” may be my favorite line in all 14 episodes to date). While there’s a version of “Pilgrim” that’s a little more daring when it comes to satire of the wealthy, and some of the filmmaking and dialogue could have used one more edit, this is actually a better horror movie than most of the dozen or so original horror flicks that landed on Netflix and Hulu in October. It just happens to be a day late. 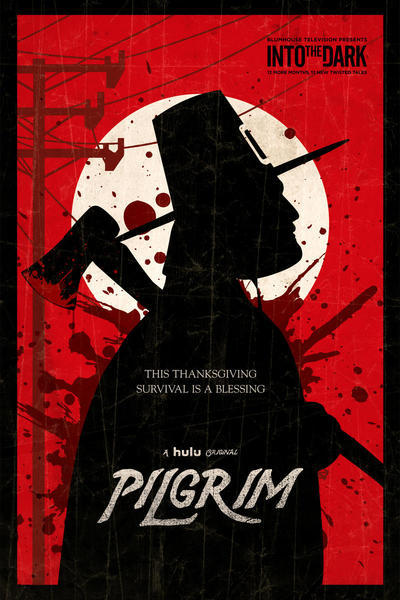