History has a funny way of repeating itself. This past April, Terry George’s “The Promise” was unceremoniously dumped in theaters to tepid reviews and swiftly fizzled with audiences. Despite having a prestigious pedigree and intentions of the utmost nobility, George’s picture fell far short of its aspirations for awards contention, making back a small fraction of its $90 million budget. The film itself wasn’t bad, per se. It featured fine performances from stars Oscar Isaac and Christian Bale, while crafting a melodrama that was never less than diverting. What made it such a letdown was the unrealized potential of its historical backdrop. George had set out to shed light on the Armenian Genocide carried out by the Ottoman government, but ultimately did this atrocity a disservice by upstaging it with a hackneyed love triangle. A film straining to sear itself into the consciousness of viewers had rendered itself bland and forgettable. Now arriving in theaters only seven months later is Joe Berlinger’s “Intent to Destroy,” a well-intentioned documentary that makes the puzzling miscalculation of upstaging the Armenian Genocide with “The Promise.”

For lengthy stretches of its near-two-hour running time, Berlinger’s film takes the form of a self-congratulatory behind-the-scenes featurette, complete with glib talking heads and footage shot between takes on the set of George’s production. Several past Oscar favorites are cited as key inspirations for “The Promise,” including “Schindler’s List,” “The Killing Fields,” and George’s own “Hotel Rwanda,” all great pictures tackling the real-life horrors of genocide. VFX director Mark Russell inadvertently pinpoints the primary shortcoming of “The Promise” by discussing the need for conveying historical events without making them “repulsive,” diluting the horror contained in archival images by restaging them in a more palatable style. The simple fact is that films about such abhorrent crimes against humanity should galvanize the senses in order to leave a lasting impact. Evgeny Afineevsky’s HBO documentary, “Cries from Syria,” was unsparingly graphic in its comprehensive exploration of the Syrian Civil War that has escalated the global refugee crisis, presenting evidence of the senseless slighter in a frank manner without devolving into exploitation. A few of its heartrending images displaying the bodies of young casualties are glimpsed fleetingly in “Intent to Destroy,” as it parallels the plight of Syrians with that of Armenians from a century ago. Unfortunately, Berlinger’s film isn’t nearly as laser-focused nor as wrenching as “Cries from Syria,” though it’s hardly a mess on the order of “Book of Shadows: Blair Witch 2,” the director’s most perplexing work to date.

“Intent to Destroy” is at its best when it simply forgets about “The Promise” altogether and focuses on the history itself, which is riveting even when recounted with straightforward earnestness. The mass extermination of 1.5 million Armenians occurred during and after WWI, providing a modern template for “population control” that was adopted by Germany during the Holocaust. The fierce nationalism voiced by the Young Turks party is frighteningly similar to that of Nazis and KKK members hellbent on eliminating an entire race of people that they deem threatening. Able-bodied Armenian men were rounded up and sent to labor camps while their loved ones were forced to embark on “death marches” into the desert. One survivor recalls seeing a pregnant woman punished for lagging behind by having her baby slashed out of her stomach. When the Republic of Turkey was established in 1923, Mustafa Atatürk rose to power as the country’s first president, granting oil to the U.S. in exchange for their silence regarding the Armenian Genocide. This was a dramatic shift for the United States, which had pledged to aid Armenians only a few years prior. Babe Ruth had even auctioned off one of his prized baseball bats to help support Armenian charities. But when MGM began pre-production on an adaptation of Franz Werfel’s 1933 hit novel about the genocide, The Forty Days of Musa Dagh, the Turkish ambassador to the U.S. successfully shut down the production.

If George had run up against similar roadblocks while shooting “The Promise,” the inclusion of his production footage would’ve made more sense, but aside from Turkish propaganda being mailed to one of the actors, we see no conflict in these scenes, apart from what is scripted. Infinitely more compelling is the extended interview with Atom Egoyan, who details the surreal experience he had while making 2002’s “Ararat,” a narrative feature about a filmmaker’s efforts to depict the genocide. Not only did Egoyan receive enraged letters and ultimatums from Turkish officials, a book was released in the country claiming that his entire career was strategically designed as a form of “cultural terrorism.” When a distributor bravely signed on to release the film in Turkey, an ultra-nationalist group threatened to bomb any theater that would screen it, thus dooming its chances to be seen by audiences. Four years later, PBS chose to air Andrew Goldberg’s documentary, “The Armenian Genocide,” while undermining its credibility with a subsequent roundtable featuring the genocide’s chief denier in the U.S., Justin McCarthy. Berlinger does manage to land an interview with McCarthy himself, though the film skims too quickly through his arguments, which all seem to deviate from the inarguable fact of the actual genocide (he insists a more appropriate term would be “mutual extermination”). The notion that Armenians suffer from “Holocaust envy” and simply want to reclaim sections of land is appalling in the extreme. Since Turkey remains a NATO ally of the U.S., the country has silenced our nation’s presidents throughout the ages, including Barack Obama, who suddenly became unable to mention the genocide once he took office. Former U.S. ambassador John Marshall Evans chillingly reveals how he was muzzled by Condoleezza Rice after he dared acknowledge the genocide, forcing him to issue a public apology.

Had Berlinger abandoned “The Promise” in an early stage of post-production, he would’ve ended up with a more cohesive, less self-serving picture. As it stands, the film is a sporadically successful indictment of how U.S. policy has been synonymous with alternative facts over the last century. Though our current president is never mentioned by name, the term “trump” leaps off the screen every time it is mentioned, much like the word “knife” in Hitchcock’s “Blackmail.” This isn’t a result of the film itself, but indicative of how Donald Trump has embodied misinformation long before he entered the presidential race. When tyrants control the media, an average-sized crowd can easily be doctored to resemble the “largest audience to witness an inauguration, period.” History can be rewritten, facts can be deemed fiction and the wounds of unacknowledged atrocities will be left unhealed. “Intent to Destroy” may be an imperfect film, but it’s still an important one. 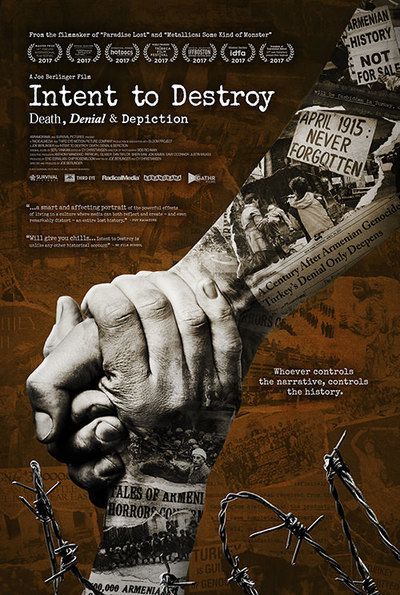