Corneliu Porumboiu’s 70-minute doc “Infinite Football” is as casual as a conversation with a stranger that ends up going for more than hour—the kind where just by being attentive and sporadically asking questions, you take away someone’s life story, and understand the one passion they could talk about on end.

So if you’re a people person, Porumboiu’s lo-fi yet irresistible portrait will reward that curiosity with the life perspective of his friend Laurentiu, who wants to change the rules of soccer forever. It’s a doozy of an evolving idea, one that involves sub teams who are limited to five different segments of an octagonal field, privileging the movement of a ball more than the players (“The ball is the star,” Laurentiu argues to a speculative but open Porumboiu). Through selected moments of Laurentiu essentially being interviewed, fragments of his past—like an injury during a match, or an emphasis on getting old—inform where these rules come from: This change to soccer is more than just a hobby, it’s his life’s work.

Porumboiu broadcasts Laurentiu’s mind from various places, like an icy blue abandoned factory, a bureaucratic office for his “fairly boring job,” or his sparse living room. And as interesting people often attract likewise, that becomes apparent when a docile 92-year-old woman and charismatic caretaker (who brags about being a chess coach) shuffle into Laurentiu’s office, about some documents regarding land that belongs to the woman’s sister. An undercurrent appears, of people trying to live within institutions and set rules, whether it’s land registry or the most popular game on the planet. But Porumboiu makes no big deal out of it; he’s just another person in the room, listening and barely in the frame, observing as this light symbolism enters the room and then soon after exits right. It’s another day in the office for Laurentiu, whose mind quickly goes elsewhere. Aligning himself with Peter Parker and Clark Kent, he smirks and says, “Maybe in my double life, I revolutionize sport.”

This is a ramshackle doc, often using only two cameras for its storytelling and with a boom mic sometimes peeking into the frame; when Laurentiu’s rules are put into action with real players, it’s covered with a simple panning camera, the audio commentary of a coach and Laurentiu providing more detail of how his field layout does and doesn’t work. The next passage involves footage of Porumboiu being presented a picture of his own wedding that any other person would have thrown away, but this mutual friend blew it up and framed it. All to say that Porumboiu reminds you with simplicity that "Infinite Football" is working within the poetry of a portrait, albeit one of many warming, droll moments, capturing people during the absurd moments that feel more alive than the orderly ones.

“Infinite Football” is made with more curiosity than outright intention, and sometimes the 70-minute running time does not always come with focus, even though its weirdness blossoms right up until it finishes what it’s trying to say. In the most low-key way, it’s best as a rumination on ambition: Laurentiu is taking on this impossible dream just to do it; Porumboiu is documenting it for the same reason, but it's not what he thinks about before he falls asleep each night. Their intent and artistry makes for fascinating teamwork in this sincere study of people who think beyond the norm. 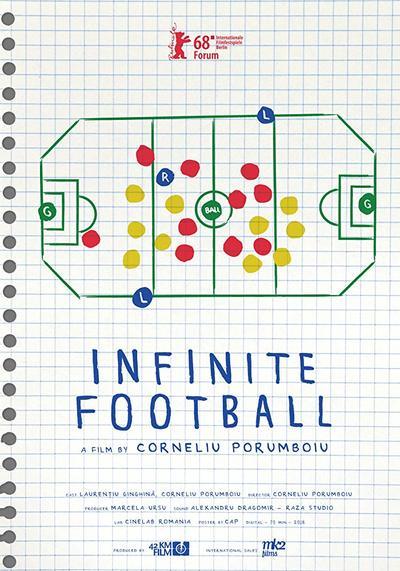 Corneliu Porumboiu as Himself