No one would ever confuse former Secretary of Labor Robert Reich with Brad Pitt. But if you like your movie stars to be smart, engaging, well-spoken, self-deprecating and Danny DeVito-size, you couldn't do much better than this leading authority on economics who served under presidents Ford, Carter and Clinton. Even a charm monster like George Clooney probably couldn't make "Inequality for All," a documentary that is basically a 90-minute how-and-why dissection of the decline of our country's middle class, any more persuasive and intermittently humorous than this popular professor of public policy at the University of California, Berkeley.

Already a household face as an in-demand political commentator and guest on late-night talk shows, Reich, 67, often carries a wooden crate that he calls "the box"—a way to compensate for his lack of height, the result of a rare genetic disease—when required to stand at a podium for speaking engagements.

But many of those moved to see this award-winning Sundance breakout title just might want to place the guy on a pedestal for so cogently and intelligently explaining the basics of why our nation's economy is in such a stagnant state for the majority of its citizens. You come away thinking that voters might have been better informed if only Reich had provided a DVD-style commentary track during last fall's often disjointed and loosely factual presidential debates.

Is it entertaining? Not if measured by superhero stunts and car-crash thrills, although Reich does sing the praises of his Mini Cooper: "I feel we are in proportion. … We are together facing the rest of the world."

Instead, you can be left aghast at the jaw-dropping statistics, such as Jon Stewart in a Daily Show clip mocking the fact that the U.S. ranks a lowly 64th on the inequality scale among the world's nations—only slightly better than the Ivory Coast and Cameroon. Or Reich's revelation that our richest 400 residents have more wealth than half the U.S. population combined. This isn't just bad for the economy, he argues, but damaging to the very core of our democratic system.

With a possible government shutdown, cuts in education spending, rising health-care costs and unemployment constantly in the headlines, director Jacob Kornbluth could not have picked a more timely topic to investigate than why the once-prosperous middle class has seen its financial status in serious decline for more than 30 years as the cost of living keeps rising. Consider that the median income for the average male worker in 2010 was $33,000—$15,000 less than 1978 when adjusted for inflation. Meanwhile, the so-called 1% grows ever wealthier while garnering more than 20% of all income—close to triple of what they earned in 1970.

Given that the doc is structured around Reich's lectures for his Wealth and Poverty class, it is natural to compare "Inequality for All" with 2006's "An Inconvenient Truth," Al Gore's glorified PowerPoint presentation that explained the environmental threat posed by global warming. But as cute as polar bears are, especially when their habitat is endangered, they can't compete with something that hits so close to home as struggling to pay for groceries, child care and rent every month.

Reich points to major developments as globalization, the technological revolution and deregulation as some of the main reasons for the widening gap for the 99%. But he does not leave them hanging as buzz words. For example, to explain how American business has increasingly relied on overseas production, he asks his students, some of whom are forced to sit in the aisles of a concert-size auditorium, to guess which country benefits most monetarily from manufacturing the iPhone. Turns out it is Japan (34%) and Germany (17%), whose work forces possess the skills to provide the state-of-the-art tech components. China, at 3.6%, only puts those parts together. Meanwhile, the U.S. gets a meager 6% of the cut.

There are slick "Mad Men"–like graphics to jazz up the facts to support Reich's main point, including the symbolic use of a suspension bridge whose vertical cables form a dip that mirrors a graph of income inequality. The middle, which stretches from 1947–77, represents the era that Reich calls "The Great Prosperity," when wages rose while companies expanded, jobs were plentiful and college was affordable. But looming at either end are the peak disparity years of 1928 and 2007, periods right before a stock market crash took place.

Wisely, Kornbluth strives to put a human face on the situation, focusing on several families who represent hard-working citizens who are barely making ends meet with their shrinking paychecks—let alone building up any savings.

Such as the Vaclavs, Erika and Robert, parents of two young daughters. She is a clerk at Costco for $21.50 an hour. He was laid off as a manager at Circuit City before the company went under, causing the couple to lose their home and move in with friends. Erika silently cries when she explains she has but $25 in her checking account. She asks in all sincerity, "How do you build wealth without any assets?"

The filmmaker also strives to be bipartisan, showing a Republican family of Mormon faith who are nonetheless pro-union after feeling the pinch of downsizing at their hometown Calpine geothermal plant, which forces the remaining workers to do more for less pay—a common scenario these days.

Reich's main point is this: The middle class provides 70% of the spending in the U.S., and they are the real job creators—but only if they are given salaries that allow them to be avid consumers, creating demand, jobs and more tax revenue. The rich simply get richer by hoarding their wealth while often taking their investments overseas.

Actually, the documentary's most surprisingly effective spokesman turns out not to be Reich but one of those fat cats: Entrepreneur and venture capitalist Nick Hanauer, awash in multi-millions as a pillow company CEO who profited greatly by investing early in Amazon.com. He considers his entitled low income-tax rate unjustified, and decries the myths behind the label of "job creator."

As Hanauer says, "When somebody calls themselves a job creator, they aren't describing the economy, although that's what it sounds like. What they are really doing is making a claim on status, privilege and power." 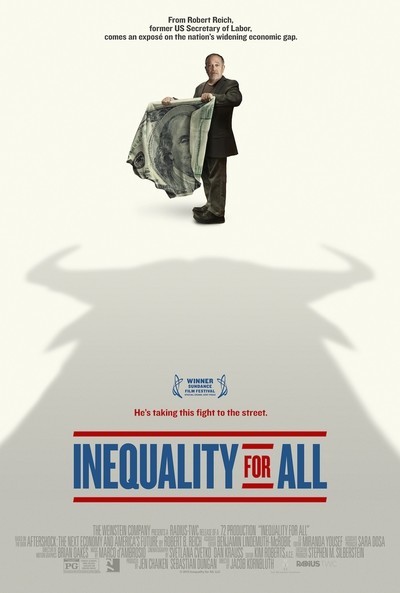