We know the facts of the assassination of Israeli Prime Minister Yitzhak Rabin because it is a true story. So "Incitement" is what newspaper editors call a "tick-tock," showing us how it happened and, as the title indicates, why it happened. The winner of Israel's top film award, it is now the official Israeli submission for the international Oscar.

Rabin was killed in 1995 by a radical "ultranationalist" named Yigal Amir, at political rally in support of the Oslo peace accords between Israel and Palestine. Amir (Yehuda Nahari) was what today we might call alt-right. He considered any accommodation to the Palestinians to be a betrayal of Israel. And therefore, in his view, that made Rabin a worse threat to the Jewish state than the Arabs. The movie unfolds from his perspective, not as a way to make us sympathetic to him but to provide context that shows the pernicious influence and support system that brought him to the rally at the Kings of Israel Square in Tel Aviv, armed with a semi-automatic gun loaded with hollow-point bullets because they do the most damage.

Amir shows us who he is immediately. We see him at an anti-Rabin protest, and then, when he is arrested and cuffed, we see that he is very good at using an easy charm and some equally easy lies to get out of trouble. With his hands cuffed, he pleads with the policeman to let him go. He first says he is a law student and will not be allowed to become a lawyer if he has a record. When that is unavailing, he quickly switches to another, more romantic and more powerful plea. He says he is about to be married and his bride will refuse unless he is let go. He is let go. And we learn that he thinks quickly and has an instrumentalist, ends-justify-the-means approach to anything he considers a paramount concern.

We then see him at the law school, asking if he can literally borrow the shirt off a friend's back. Amir is going to see a young woman he is interested in and wants to look good. Like the police officer, the friend initially says no, but is persuaded by Amir's persistence and apparent sincerity. The girl is Nava (Daniella Kertesz). Amir tries to impress her, bragging about being admitted to an exclusive Ashkenazi high school, even though he was from a Yemeni immigrant family. He tells her, "I'm like a laser pointer. I mark targets and conquer them, one by one."

Their conversation may sound more like a job interview than a date to American audiences, but Israelis and Orthodox Jews will recognize the laser pointer focus of courtship in that community. There is no kissing, not even touching, no chit-chat about favorite movies or whether it is better to vacation in the mountains or at the beach. They are there to make a decision about whether they want to get married, and once they cover basic topics like how many children and whether they want to live in a settlement, things move very fast, and the next step is meeting each other's families. Nava agrees to meet Amir's family but when she arrives at their home she is overwhelmed by the number of people and implied expectation that everything is all but settled between them. She leaves before Shabbat dinner is served. Some targets cannot be conquered, even by laser pointers.

Before Nava leaves, though, Amir's mother tells her how he got his name. They planned to name him after the first man in the Bible to admit he made a mistake. But at the bris, they impulsively changed it to Yigal, which means "he will redeem," a name that is "a full sentence." His mother believes he will fulfill that destiny.

Tick tock. Nava does not want to marry him, a frustration. Amir becomes more and more caught up in the idea that Rabin was a "pursuer" (rodef in Hebrew), someone with murderous intent who may or even must be stopped according to Talmudic law. The question is, by whom? It is not clear whether Amir is really being encouraged by the rabbis he consults or whether that is his interpretation, but he is convinced that he has the right and the obligation to act. As an Israeli army veteran, he and his friends all have military training in weapons and tactics. Once they believe killing Rabin is their mission, they have the skills and the tools to pursue the man they have deemed a "pursuer."

Nahari shows us Amir's warmth and his ability to persuade others as well as to be persuaded himself. He makes Amir an appealing character while not making him sympathetic or trying to persuade us he is a hero or a victim. Director/co-screenwriter Yaron Zilberman deftly blends archival footage with scenes of Yigal becoming increasingly committed to murdering the Prime Minister. The scenes of current Prime Minister Benjamin Netanyahu, then head of the opposition Likud party, at a rally opposing Rabin's peace deal, point to the inflammatory rhetoric as leading to Amir's grandiose conviction that he was saving Israel by killing Rabin. The extreme, sharply divisive, partisan language might have seemed a world away to us if we had seen it 25 years ago. Now, it seems chillingly close. Tick tock. 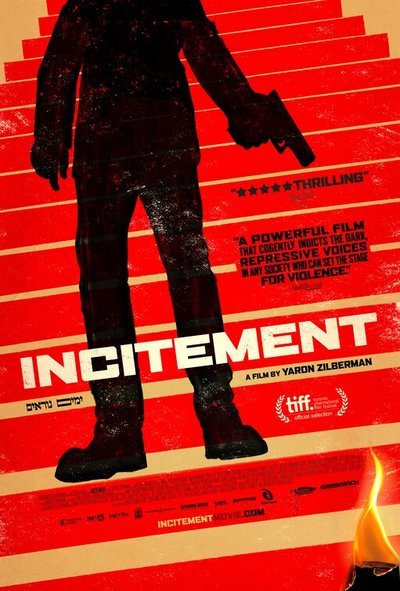