Film scripts make many mistakes that are easily survivable if you have talented actors and fluid direction. But a script that features low-stakes conflict is difficult to survive, especially if the film doesn't have those other elements working in its favor. Mel Rodriguez III’s "In Stereo," a "romantic" "comedy" (quotations required for both words) is one of the lowest-stakes movies in recent memory, and the worst part is that it thinks that it is a high-stakes movie. It also thinks these characters have "relatable" problems. They don't. The main problem they share is that their personalities stink and they don't know it. Rodriguez, who wrote the script, doesn't seem to know it either.

David (Micah Hauptman) is a fortunate and gifted photographer who is successful enough to have his own show coming up in an enormous gallery but still spends his time feeling put-upon and wronged. Exactly what he photographs is unclear, but when the movie begins, David is a rage-boy, provoking people (strangers, his girlfriend, cops) and then taking pictures of their reactions just before they punch him out or flip him off. He always has a split lip or a black eye. He is an angry, vicious little man, and he is the hero of our story.

In the film's opener, he kicks his ex-girlfriend Brenda (Beau Garrett) to the curb when she suggests they move in together. Not even a year later he has moved in with a rebound girl named Jen (Melissa Bolona), a gorgeous nonentity with resting bitchface whom he suspects is cheating with his best friend Chris (Kieran Campion). The fact that David is a terrible boyfriend, un-giving and cold, may have something to do with her infidelity, but "In Stereo" gangs up on Jen, demonizing her in scene after scene, even though she's selfish but ultimately no worse than the rest of them. Chris, the best friend, is a gloomy Byronic gadabout, bored with everything, even sex with hot women. He does nothing with his life because his family is rich.

David decides to live his life "in stereo," which means following Jen through the streets and subways, taking surreptitious photographs of her, and obsessing on what she does when she is not with him. In voice-over, he tells us that his uncle was a private investigator who gave him advice: when you follow people, the key is to know where they are going and to get there first. (This concept is lifted, almost word for word, from the far more effective "Zero Effect.") Meanwhile, we catch up with Brenda, an actress, who is so unpleasant to work with that she just got fired from a reality-TV hostess job for being rude to the show runner and who rolls her eyes at other students' work in her acting class, even taking phone calls during someone else's monologue. When Chris tells her later in the film that she is like a "ray of moonlight" in a chaotic world, you assume he hasn't seen how she treats waiters.

But the filmmaker seems to believe that he has created a "ray of moonlight" in Brenda, and that David is an interesting character, troubled and lost and therefore somewhat sympathetic. He's not. He's a bully, emotionally and otherwise. He starts trouble with strangers, one encounter having an unpleasant homophobic quality, and then takes pictures of the people freaking out. He's a troll. He is also in therapy, but he does nothing in therapy except complain and prop up his own aggrieved and righteous sense of himself.

What David wants is a low-stakes life and, ultimately, that is the main issue, because in real life, things matter to people. Who you fall in love with matters. Your career matters. Your friendships matter. In "In Stereo" nothing really matters. David doesn't even seem to like Jen. He just uses her as a punching bag for his rage and entitlement. "In Stereo" doesn't realize that the problem is not Jen, but David.

When Tommy Lee Jones appeared on "Inside the Actor's Studio," he was asked about playing murderer Gary Gilmore, and whether or not an actor had to like the character he was playing. Jones' response was typically blunt: "No. But I think you have to want to watch the character." Films don't have to feature likable people to be successful. Far from it. But a film has to let us know why we want to watch these people. Like its lead character, "In Stereo" does not want to do the necessary work. 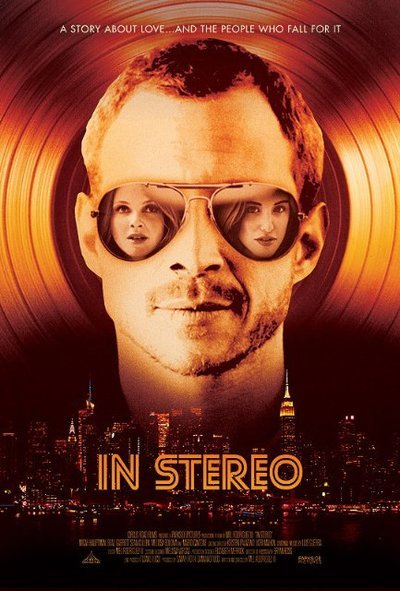 Micah A. Hauptman as David Gallo