Comics artist Howard Chaykin once (or twice) said that the role of advertising is to flatter you into thinking that you’re smarter than advertising. That concept is put to work in “In Fabric,” a slippery horror-comedy about the equally treacherous relationship between salespeople, consumers, and their possessions. Watching “In Fabric,” the latest giallo-inspired adult fairy tale by British writer/director Peter Strickland (“The Duke of Burgundy,” “Berberian Sound Studios”), is often disorienting given how blunt its anti-consumerist symbolism and queasy sense of humor can be. But if you respond to Strickland’s weird combination of psychedelic elusiveness and kitchen sink melodrama, “In Fabric” might stick in your mind. Strickland frequently tests viewers’ patience, but his off-putting sensibility is powerful enough to make “In Fabric” as mesmerizing as its subject matter: salesmanship as a sinister, inescapable form of hypnosis.

Unlike some contemporary British genre fiction with a capital “M” Message (cough, “Black Mirror”), “In Fabric” only starts by clubbing you over the head. We follow Sheila (Marianne Jean-Baptiste), a recently divorced bank teller, as she struggles to balance working in a cartoonishly predatory work environment (they count the minutes she’s in the bathroom) with her homelife, which has mostly devolved into caring for her insufferably bratty art student son Vince (Jaygann Ayeh) and his equally exploitative girlfriend Gwen (Gwendoline Christie). Sheila’s also trying to get out and date more, but so far, she’s only met penny ante losers like Adonis (Anthony Adjekum), who shows up late and eats with his mouth open (don’t ask him for his dinner order yet, he’s not ready).

Sheila tries to buy herself something nice to offset all this cringeworthy domestic drama. That understandable conviction leads her to a “Needful Things”-esque clothing store that’s run by the mysterious Miss Luckmore (Fatma Mohamed) and the equally creepy Mr. Lundy (Richard Bremmer). Luckmore and Lundy speak in cryptic, fortuneteller-like dialogue that make them sound like gypsies from a third-rate Universal horror sequel, stuff like “In apprehensions lie the crevices of clarity" and "A purchase on the horizon, a panoply of temptation. Can a curious soul assist?" That sort of mystifying talk is meant to be quaint, but nobody is buying that dumb routine. Still: the red dress that Luckmore practically forces on Sheila (at a steep discount) is fetching. That said: Sheila’s new dress is apparently cursed, and Luckmore is clearly some kind of witch.

If this set-up appears to be overly familiar or obvious—good. Unlike the technology in “Black Mirror,” nothing in Strickland’s scenario is presented as a uniquely modern problem. The flattery and fake old-world charm that’s baked into Miss Luckmore’s sales jive is similar to the ostentatious hospitality provided by Vlassis (Pano Masti), the waiter at the Greek restaurant that Sheila keeps returning to for her Lonely Hearts dates. Even that by-now-antiquated concept, of dating through personal ads, is charming in the same way as Luckmore’s rococo, vintage clothes (all luxe fabric and harsh angles) or her boutique’s retro TV ads, with their warped audio, chintzy music, and “Spirits of the Dead” by way of Crazy Larry’s Wholesale Bargain Bonanza style: they’re all made to look tacky enough to be (mostly) harmless.

But eventually, Sheila’s narrative is interrupted by a competing story (SOME SPOILERS, I GUESS): newly engaged washing machine repairman Reg (Leo Bill) learns that he has the power to hypnotize anybody just by explaining, in granular detail, what parts of their machine might be broken, and how he could fix them. This is another kind of sales-craft, and it works by suggesting that you’re too smart to be tricked by a plain-spoken laundry list. Reg and Sheila’s stories compete for our attention, but they’re immediately bonded by their fleeting connection to Luckmore’s shop and that creepy/sexy/non-refundable red dress. The rest of what makes “In Fabric” so potent boils down to a series of wispy, competing associations, the kind that are not so much spelled out as hinted at through common jargon—both Luckmore and Vassilis say that they will serve their customers “instantly”—and darkly funny sadism (think O. Henry by way of Mario Bava).

Everybody resists the dehumanizing effects of commodification, but we all get sold anyway, including salespeople like Sheila—one Lonely Hearts date reminds her that she previously called him on behalf of her bank, and was rather “stern” when she tried to collect a bill—and Reg: he’s hypnotized by a TV ad in the same way that others are lulled into a trance by his dry palaver. Strickland’s movie is also relentless; “In Fabric” had worn me down long before Strickland pulled together his layered narrative’s dangling plot threads. So while I remain skeptical about Strickland’s last two features (even if “Duke of Burgundy” also eventually won me over), I have to say: this new one is something else. 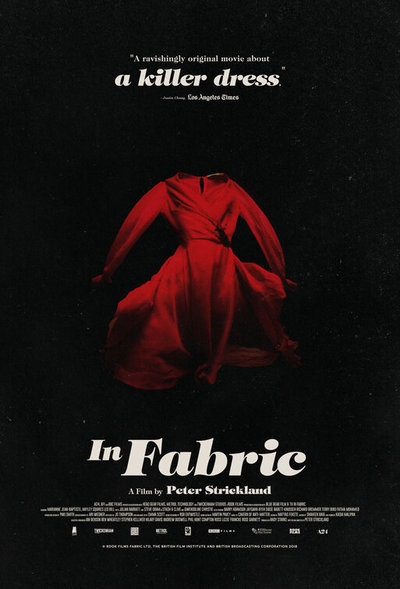