In 2017, Indonesian filmmaker Joko Anwar’s remake of Sisworo Gautama Putra’s 1982 cult favorite “Satan’s Slaves” was a huge hit in his home country and made him a name to watch among international horror fans. Following a detour into superhero cinema with 2019’s “Gundala,” he has returned to horror with his latest effort, “Impetigore,” and right from the opening moments, it's clear that he's anything from a one-hit wonder. Merging together classic genre tropes with elements of his country’s history and culture, Anwar has created an uncommonly effective film that is smart and provocative in addition to being all kinds of creepy.

Whatever you do, make sure you are watching the film right from the beginning because it kicks off with an absolutely spellbinding opening sequence. In it, Maya (Tara Basro) is working her dead-end job as a toll booth collector in a remote part of the city, chatting with best friend Dini (Marissa Anita) over their cell phones to alleviate the boredom. The boredom quickly disappears with the arrival of a sedan that Maya is convinced has been following her around for the last few days. When a truck pulls up, the car drives off but the driver soon returns and demonstrates that he knows a lot about Maya, delivering the ominous message “We don’t want what your family left behind” before attacking her. Maya survives the attack but is clearly unnerved about what her attacker seemed to know about her, and begins to look through the possessions of the late aunt who raised her for as far back as she can remember.

Maya makes a discovery that leads her to believe that her late parents were actually rich, and that the enormous house they owned in a remote Javanese town where she was born may now belong to her. In dire need of money, she and Dini head off to the village to check things out and while they find the house easily enough, they also discover some other unsettling things—the fact that there don’t seem to be any children around aside from the three girls that Maya occasionally spots, and that the graveyard contains far more graves than one might expect from a place that size. After learning that the local bigwig, Ki Saptadi (Ario Bayu), is a practitioner of the ancient art of shadow puppetry, Maya and Dini decide to pose as students conducting research in order to find out about the house and the weirdness that seems to be affecting the town. The rest I shall leave for you to discover but suffice it to say, things do not go especially smoothly for the two.

The basic plot elements of “Impetigore” are perhaps not blazingly unique, I suppose, but what Anwar lacks in terms of originality, he more than makes up for with sheer style. Following the electrifying opening sequence, he shifts gears to slow-burn mode, proving he is just as capable at ratcheting up the suspense via a more deliberate and measured approach—there's a beautifully done extended sequence in which Maya and Dini are riding a bus at night to get to the village that develops a quietly mounting sense of dread and paranoia that's straight out of the Val Lewton playbook. While he sets the stage for the more overt horrors Maya and Dini will soon face, Anwar generates additional tension by setting up a clash between the modern ideas in Maya and Dini's big city attitudes and the town's more superstitious and old-fashioned traditions of the past, ranging from a general mistrust and fear of women to a wholehearted embrace of things like curses, and the gruesome lengths that some need to go through in order to break them.

With a title like “Impetigore,” some viewers may be expecting or fearing that the film may be a wall-to-wall bloodbath, but that's not quite the case here. Yes, there are a few grisly moments and one of them, while dramatically necessary, is especially appalling. For the most part, most of the horrific imagery on display is reasonably restrained with an emphasis on the implied over the explicit, and when the gore does crop up, it exists for reasons other than to simply try to gross out the audience. More importantly, Anwar has done such a good job of developing both the menacing atmosphere that suffuses the film's every frame and the character of Maya—Basro is very strong and compelling in the role—that when the red stuff does begin to flow, most people will already be thoroughly hooked.

“Impetigore” has only two stumbles that keep it from being a complete knockout and they both come towards the end. The first is an extended flashback sequence in which all of secrets are revealed just before the big climax—while I recognize the necessity for such a scene, it's dropped in with such a surprising lack of finesse that it winds up sticking out like a sore thumb, while at the same time slowing things down at just the moment when the tension should be at its absolute peak. The other, less forgivable stumble is an exceedingly cheesy epilogue that takes a perfectly sound conclusion to an otherwise intelligent film and negates it with a tacky shock moment, a la the terrible final scene in the original “A Nightmare on Elm Street.” And yet, not even this inexplicable concluding moment can quite dilute the ultimate impact of the film, an otherwise ideal blood-freezer for a hot summer night. 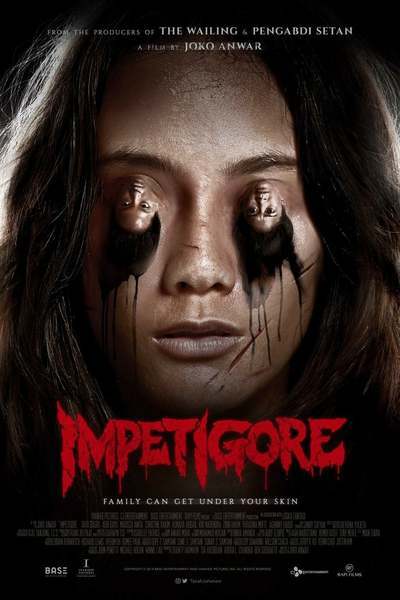