I'll Be Home for Christmas

“Pleasantville” is a movie about a bland 1950s world in which lives go around in circles, until time travelers break in with the virus of change. Some writers have attacked the movie, arguing that things were better in the 1950s than they are now. They might enjoy “I'll Be Home for Christmas,” an exercise in cinematic Ovaltine.

The movie takes place in the present, I guess, but it feels like a 1950s sitcom. The characters have much in common with old (not new) Archie and Jughead comics. The soundtrack includes Gene Autry tunes, not selected for ironic purposes. It's the kind of movie that just misses a G rating and gets slapped with a PG for rudeness.

Oh, it'll have its fans. The star is Jonathan Taylor Thomas, from TV's “Home Improvement,” who is an immensely likable actor. But even his easy grin seems to weary a little by the later stretches of the film, which is unrelentingly corny.

The plot: Thomas plays Jake, a student at Palisades University, a campus on the Pacific coast that, in this film, looks like a high school where Our Miss Brooks would still be on the faculty. His dad has sent him a ticket to fly home to Larchmont, N.Y., for Christmas, but his devious plan is to cash it in for two tickets to a beach resort and persuade his girlfriend Allie (Jessica Biel) to go along. Then Jake's dad bribes him with a restored '57 Porsche if he'll come home for Christmas.

Jake's rival for Allie's affections is Eddie (Adam Lavorgna), but this is the kind of movie where Allie is such a nice girl she doesn't even consider Eddie--no, not even when she drives cross-country with him. Which she does because she is convinced Jake has stood her up. Jake was actually the victim of a practical joke, in which Eddie and his pals dressed him in a Santa suit and dumped him in the desert, where turkey vultures eye him beadily, ho, ho.

Jake wears the Santa suit for the rest of the movie, as he desperately tries to get home to Larchmont, rescue Allie from Eddie, etc. As you can imagine, the Santa costume inspires countless wheezy attempts at humor. It even gets him entered in a Santa 5K Charity Run, where all the contestants are dressed as Santa. (In a heartrending finale, he beats the mayor, but still allows the mayor to donate the cash prize to buy turkeys for those without a bird on the table for the holidays.) Of course Jake steals a sleigh for the big climax.

There is possibly an audience for this movie, but I have the oddest feeling that on opening night the people in the theater will all be in black and white. See “Pleasantville” if you wonder what I mean. In fact, see “Pleasantville” anyway. “I'll Be Home for Christmas” will appeal to people who fail to care if nothing good happens in a movie, just as long as nothing bad happens in it. 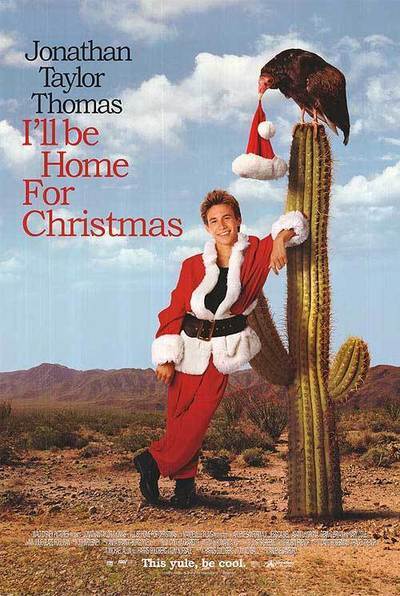 Rated PG For Mild Language and Some Rude Humor