She’s only 17, but already Chloë Grace Moretz has cemented her ability to play a wide variety of characters who are both girlish and wise beyond their years, from the “Kick-Ass” movies to “Let Me In,” and even last year’s  “Carrie” remake. In “If I Stay,” based on the weepy young adult novel about a teenage girl trapped in an ethereal realm who must choose between life and death, her grounded, naturalistic presence goes a long way toward making mushy material palatable.

Moretz’s performance—and the easy chemistry she shares in flashbacks with co-star Jamie Blackley as her boyfriend—help fortify a story that, for all its popularity, is rather maudlin and painfully awkward at times.

Granted, a lot of this stuff works better on the page. Fans of Gayle Forman’s best-selling novel will be happy to see that director R.J. Cutler and screenwriter Shauna Cross have stayed true to its back-and-forth structure, and the small tweaks in details here and there are improvements. Cutler—making his narrative feature debut following documentaries including the “The September Issue,” about Vogue magazine editor Anna Wintour—keeps things moving in brisk, efficient fashion.

You get the sense in watching this that Cutler wanted to keep the melodrama to a minimum, and indeed, “If I Stay” does feature some moments of powerful understatement. Still, there was major sobbing and snuffling in the audience at the screening I attended. As in this year’s other dying-girl drama based on a popular YA novel, “The Fault in Our Stars,” the expectation and release are crucial to the catharsis. It’s reliable and irresistible, and there is an audience for that sort of experience.

And yet, the vision of Moretz’s character, Mia, hovering over her own comatose body after a devastating car accident and running frantically through hospital corridors searching for answers just feels jarring and forced compared to the comfortable energy that exists elsewhere. Imagining a ghostly purgatory in your mind as you’re reading is one thing; seeing it depicted literally on screen is something else entirely, and it’s clunky.

“If I Stay” begins in happier times. Mia, a cello prodigy with dreams of attending Juilliard, is enjoying a snowy morning with her mother and father (Mireille Enos and Joshua Leonard), former rock ‘n’ rollers who’ve toned it down but maintained an irreverent sense of cool, and her younger brother, Teddy (Jakob Davies). Mia will go on to say later in the movie that she feels like a space alien in this family, with her quiet demeanor and love of classical music. But her honest exchanges with her parents—particularly the appealingly down-to-Earth Enos as her mother—are among the film’s strongest moments.

On their way to visit longtime friends and their new baby, the family’s car slams into an out-of-control vehicle on an icy Portland road. As emergency workers dash about treating the victims, Mia finds herself wandering among them in a hazy, out-of-body experience. She quickly hops into her own ambulance to the hospital and continues to follow herself from surgery to the intensive care unit. As her earthly self clings to life, her mind wanders to the past, bringing us up to speed on who she is and how she got here.

We see Mia and Blackley’s Adam fall in love over their shared love of music, although as the lead singer and guitarist of a rock band on the rise, his is a very different kind. The way in which they try to meet each other halfway and understand one another’s tastes is sweet and playful. You can see the dreamy allure he holds, with his puppy-dog eyes and a front man’s edge.

We see Mia passionately practicing her cello—Bach’s “Cello Suite No. 1 in G,” naturally, as much of a standard as The Ramones’ “I Wanna Be Sedated,” which inspired Adam to pursue music at a tender age. We see her give the performance of her young life at her audition for Juilliard. And we see her enjoying girl talk over coffee with her best friend, Kim (Liana Liberato, nicely underplaying the wisecracking sidekick role).

Her life seems so rich and full and interesting—and her dilemma over whether to move across the country to pursue her dreams or stay home for the safety of true love is so compelling—that the material that constitutes the flashbacks could have been a fine coming-of-age drama in and of itself. But of course there is something of greater spiritual magnitude at play here, complete with an extremely literal white light that beckons her to let go and follow it.

Should she stay or should she go? It’s a musical question Adam is probably more familiar with, but Mia’s answer is never in doubt. 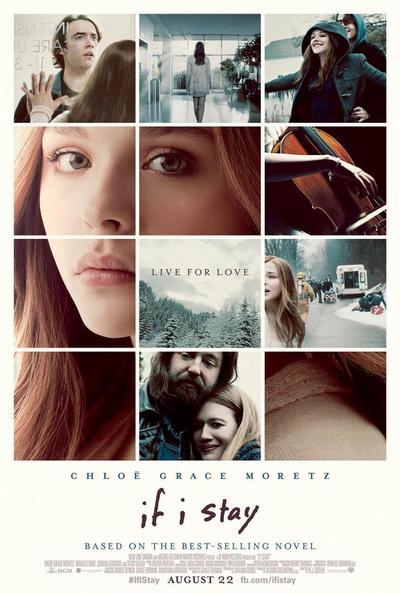 Rated PG-13 for thematic elements and some sexual material