Stop me if you’ve heard this one before: the den mother, indeed, the biological mother, of a criminal family sits rotting in jail, a widow as a result of the bust that nabbed her. Her two sons are loyal boys and good earners. One is the more ethical of the pair, in that old “to live outside the law you must be honest” kind of way. The other son is a snakelike psycho sadist more or less mass murderer who, when his brother is in a less than voluble mood, charms him by asking if he’s having his period. Now mom’s got the cancer (or something equivalent) and wants to breathe free air before purchasing the final farm. And she’d like to be sure her family’s criminal equivalent of a 401K is nice and plump too. So she engineers both a parole and a heist.

Right. As the rock critic Robert Christgau once wondered about a mid-'70s Rod Stewart album, “How’d all those clichés get in there I wonder.” Written and directed by regional filmmaker John Swab (who also has a supporting role), this Tulsa-peripheral crime drama stars Melissa Leo, Josh Hartnett, and Frank Grillo in the roles of Ida (her nickname “Ida Red” derives from a song by cowboy swing legend Bob Wills), Good Brother Wyatt, and Psycho Brother Dallas, respectively. Rounding out the clan is sister Jeanie (Deborah Ann Woll), on the outs with mom, maybe because she’s married to a kind but soft cop named Bodie (George Carroll). Their daughter, rebellious teen Darla (Sofia Hublitz), is of course drawn to her charming uncle Wyatt.

Wyatt’s having a hard time holding things together after a truck heist goes wrong. A less-than-avuncular FBI man played by William Forsythe is asking discomfiting questions even before Dallas appoints himself a cleaner for the job, a task he takes on with undue relish. Dallas strolls into a hospital ICU to smother a survivor of the shooting. (And what is it with these movies, by the way, where pretty much anybody, including someone who looks like Frank Grillo on his way to commit a homicide, can stroll through hospital corridors unmolested the better to smother a guy in the ICU? I know health services are overtaxed nowadays but seriously—how often does this really happen, if ever?) Dallas goes in search of the wingman who helped screw things up and shoots some of his kin. Dallas is nasty.

Meanwhile, cop Bodie is not too bright, leaving a file he’s compiled on his in-laws right on the car seat next to daughter Darla so she can discover it while Dad’s running an errand while taking her round the way. Character notes for Darla, played appealingly by Sofia Hublitz, highlight her legerdemain whilst shoplifting beer and seem to be intended to put her in some kind of forefront.

But after Leo gets to deliver her probably contractually obliged Big Speech To The Parole Board, with her stolidly crooked lawyer played by Mark Boone Junior at her side, the story goes wobbly in a number of ways. The big heist seems to have been staged in a ghost town. Swab wants to get to “Heat” but he can’t get anything up to a proper temperature.

And in a crucial conversation between Hartnett and Boone, Boone decides, internally, I suppose, to take a cue from Jack Starrett’s work as Gabby Johnson in Mel Brooks’ “Blazing Saddles.” His mumble-mouthed line readings spell disaster for the movie’s denouement, and what may have been intended as a poignant catharsis becomes an infuriating head-scratcher. But if this kind of genre stuff is your cinematic meat, and you’re properly enamored of any of the principal cast members, Swab has enough directorial energy to keep the proceedings watchable at the least. 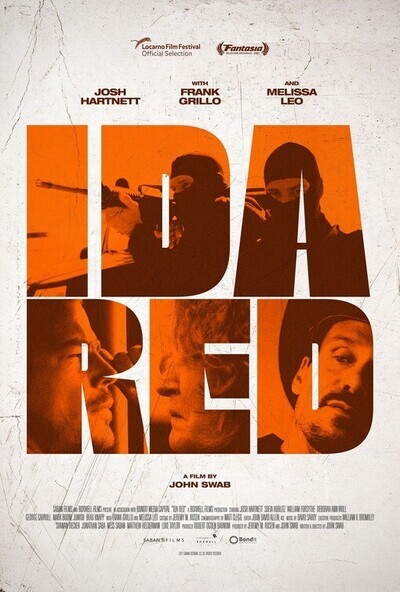