I Still See You

At the heart of the ghost story "I Still See You" is a timely story about the perils of trusting the wrong men. This thematic concern with disingenuous allies isn't subtly expressed, but it is compelling for a while, especially given the movie's high-concept premise: a devastating new kind of bomb has gone off in Chicago and now, ten years later, Jewel City residents are regularly haunted by "Remnants," ghosts of the people that died on the day of the explosion. Remnants are stuck in a time loop, so Jewel City residents see their neighbors and loved ones doing the same things over and over, and always in the same exact spot.

That simple premise (which comes from novelist Daniel Waters' source novel Break My Heart One Thousand Times) is almost immediately complicated: sensitive high school student Veronica (Bella Thorne) notices new Remnants popping up every day, some of whom were not still alive ten years ago. This leads her to discover that she's being stalked from beyond the grave by a hunky, but sullen ghost named Brian (Thomas Elms) who first appears to Veronica in her bathroom while she's showering.

Look, that last sentence may sound silly, but gratuitous eye candy (he's wearing briefs, ladies!) makes sense when you accept that "I Still See You" is a horror/science-fiction thriller whose ideal audience appears to be teenage girls (Veronica's shower is thankfully not not too perv-y ... or mildly pervy, if you prefer). What doesn't stand up to much scrutiny is the way that Veronica's quest to stop Brian's Remnant becomes fatally complicated once she enlists the help of generic misfit Kirk (Richard Harmon) and Nice Guy teacher Mr. Bittner (Dermot Mulroney). Kirk and Mr. Bittner expand the scope and meaning of Veronica's quest to a degree that's ultimately illogical and dramatically unbelievable. So while "I Still See You" starts off as cheesy but basically coherent, it eventually becomes tedious and nonsensical.

"I Still See You" is ultimately disappointing because she, a young woman who refuses to be victimized/traumatized by the ghosts she's literally surrounded by, ultimately doesn't make sense. She's consistently under-developed: her only character-defining traits are her straight, goth-black hair, dark clothes, and slightly awkward syntax. Veronica used to get good grades ... before she started seeing Brian, that is. She also likes Mr. Bittner because he's familiar, hip, and warm. And she's drawn to Kirk because he, like so many other poor James Dean imitators, is a loner, a rebel, etc. Veronica also has some unresolved daddy issues, mostly because her father's Remnant keeps re-appearing at their family's dinner table (though Veronica also has fond memories of her dad teaching her how to ice-skate). But beyond that, Veronica's basically a girl-shaped clothesline that director Scott Speer and screenwriter Jason Fuchs hang a bunch of ideas on.

Sadly, those ideas don't all go together, not in a logical or even emotionally sensible way. Kurt's problems—he wants to know why his dead dad doesn't haunt him, too—add nothing to Veronica's story. And yet, he's Veronica's constant companion throughout a metaphysical investigation that leads her to think about her dead dad and ice skating, but also Brian her shower stalker. Also, Mr. Bittner has a daughter too, and Kurt has a gun in his locker, and there's a scientist in Chicago that they have to talk to? All of these loose threads are inevitably tied up, even though it's often unclear why they came loose in the first place.

There is, however, one plot twist that initially seems gratuitous and mean-spirited, but is fairly revealing. In this sequence, Veronica asks childhood friend Chandler (Micah Kennedy) to help her photograph Brian (even though proving Brian's existence soon stops being one of Veronica's top priorities). Veronica tells Kurt that Chandler has had "a crush on [her] since second grade," so of course he'll help. But Chandler's not completely harmless: he'll help, but only on the condition that Veronica goes out with him on a date. Veronica breezily dismisses him, but Chandler's counter-offer casts an even harsher light on him, though this scene is played for laughs: he'll help Veronica if she tells people that they made out once. She agrees, despite Kurt's yelp of a protest. You have to know who you're dealing with if you're going to survive in a world filled with predators and ghosts. Veronica does, in this instance, but there are obviously other men out there.

The main reason "I Still See You" doesn't come together is that Speer and Fuchs are so focused on complicating their already over-convoluted plot that Veronica's fate is ultimately determined by generic reasons that have nothing to do with the film's bigger ideas or internal logic. Say what you want about the first half of "I Still See You," but at least it cursorily made sense when the great threat that Veronica faced was a beefcake ghost. 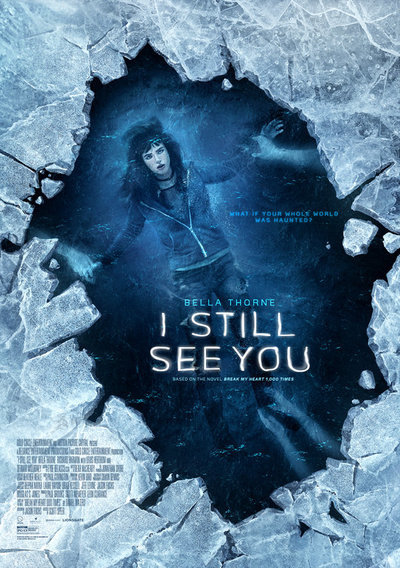