I Spit on Your Grave

A vile bag of garbage named "I Spit on Your Grave" is playing in Chicago theaters this week. It is a movie so sick, reprehensible and contemptible that I can hardly believe it's playing in respectable theaters, such as Plitt's United Artists. But it is. Attending it was one of the most depressing experiences of, my life.

This is a film without a shred of artistic distinction. It lacks even simple craftsmanship. There is no possible motive for exhibiting it, other than the totally cynical hope that it might make money. Perhaps it will make money: When I saw it at 11:20 a.m. on Monday, the theater contained a larger crowd than usual.

It was not just a large crowd, it was a profoundly disturbing one. I do not often attribute motives to audience members, nor do I try to read their minds, but the people who were sitting around me on Monday morning made it easy for me to know what they were thinking. They talked out loud. And if they seriously believed the things they were saying, they were vicarious sex criminals.

The story of ''I Spit on Your Grave" is told with moronic simplicity. A girl goes for a vacation in the woods. She sunbathes by a river. Two men speed by in a powerboat. They harass her. Later, they tow her boat to a rendezvous with two of their buddies. They strip the girl, beat her and rape her. She escapes into the woods. They find her, beat her, and rape her again. She crawls home. They are already there, beat her some more, and rape her again.

Two weeks later, somewhat recovered the girl lures one of the men out to her house, pretends to seduce him, and hangs him. She lures out another man and castrates him, leaving him to bleed to death in a bathtub. She kills the third man with an axe and disembowels the fourth with an outboard engine. End of movie.

These horrible events are shown with an absolute minimum of dialogue, which is so poorly recorded that it often cannot be heard. There is no attempt to develop the personalities of the characters - they are, simply, a girl and four men, one of them mentally retarded. The movie is nothing more or less than a series of attacks on the girl and then her attacks on the men, interrupted only by an unbelievably grotesque and inappropriate scene in which she enters a church and asks forgiveness for the murders she plans to commit.

How did the audience react to all of this? Those who were vocal seemed to be eating it up. The middle-aged, white-haired man two seats down from me, for example, talked aloud, After the first rape: "That was a good one!" After the second: "That'll show her!" After the third: "I've seen some good ones, but this is the best." When the tables turned and the woman started her killing spree, a woman in the back row shouted: "Cut him up, sister!" In several scenes, the other three men tried to force the retarded man to attack the girl. This inspired a lot of laughter and encouragement from the audience.

I wanted to turn to the man next to me and tell him his remarks were disgusting, but I did not. To hold his opinions at his age, he must already have suffered a fundamental loss of decent human feelings. I would have liked to talk with the woman in the back row, the one with the feminist solidarity for the movie's heroine. I wanted to ask If she'd been appalled by the movie's hour of rape scenes. As it was, at the film's end I walked out of the theater quickly, feeling unclean, ashamed and depressed.

This movie is an expression of the most diseased and perverted darker human natures, Because it is made artlessly, It flaunts its motives: There is no reason to see this movie except to be entertained by the sight of sadism and suffering. As a critic, I have never condemned the use of violence in films if I felt the filmmakers had an artistic reason for employing it. "I Spit on Your Grave" does not. It is a geek show. I wonder if its exhibitors saw it before they decided to play it, and if they felt as unclean afterward as I did. 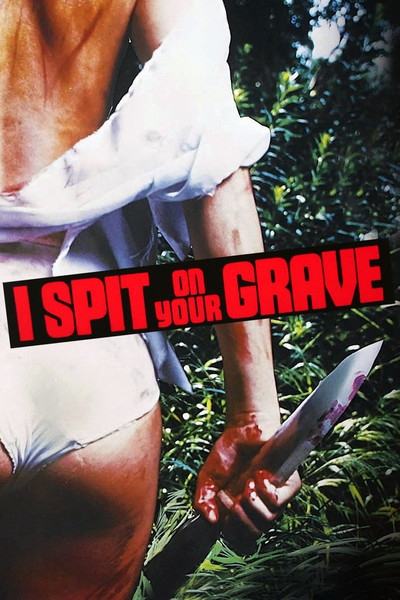