I Am Not a Serial Killer

I'm not entirely convinced that the makers of pseudo-psychological thriller "I Am Not a Serial Killer" know the difference between a cold sociopath and a garden-variety adolescent. In the film, quintessential teenager John Wayne Cleaver (Max Records of "Where the Wild Things Are"), a clinically diagnosed sociopath, tries to stop neighbor Bill (Christopher Lloyd) from slaying people and stealing their organs. John, like Will Graham in TV's "Hannibal" and Dexter Morgan in "Dexter," is presented as the only person sensitive enough to catch a killer since he already thinks like a killer. Or at least, John thinks he behaves like a budding killer, and therefore obsesses over the notion that his lack of empathy means that he will someday become a ruthless murderer. But at no point is it clear that writer/director Billy O'Brien ("Isolation") and co-writer Christopher Hyde know how real teenagers behave, let alone real crazy people.

John has a weird upbringing, having been raised in a funeral home by his mom (Laura Fraser). But all of the telling signs of John's sociopathology suggest that he's just a commonplace high-schooler. He blows off ostentatiously flirty classmate Brooke (Lucy Lawton) because he either can't see or doesn't care that she's into him. And he eventually confesses to his best friend Max (Raymond Branstrom) that he only hangs out with Max because it makes him feel normal. John also constantly writes about and independently researches the likes of Jeffrey Dahmer and the BTK Killer. The only real sign that John is abnormal, however, is that when he goes to therapy, he tells his sympathetic—but apparently ineffective—shrink Dr. Neblin (Karl Geary) that he fears he will eventually hurt somebody. Then again, if this kid were a stoner, nobody would think he's that weird.

Now, to be fair: you could argue that the filmmakers are trying to establish that John's abnormality is insubstantial, and that his mother and therapist and school principal and classmates are only responding to John's discomfort in his own skin. But while John's inability to control himself is supposed to be indicative of a psychological grey area, it's really just a plot device for a tacky detective story. O'Brien and Hyde, adapting one of a series of novels written by Dan Wells, don't work too hard to get inside John's head. They just want to use John's love of true crime psychological profiling, fear of instability and proximity to embalming fluid to further their story.

John's story is otherwise just like other unimaginative pulp narratives about a brooding antihero who stalks other bad guys. There are several givens you have to buy in order to accept the events of "I Am Not a Serial Killer." First, you have to believe that John's drive to stop Bill is motivated by a generic compulsion to deny his true nature. You also have to accept the notion that Bill's actions are disturbing to John because nobody else seems to care or be perceptive enough to notice them. How else can you explain the fact that the cops are ineffective against Bill and that John's mom doesn't seem to care that John is disturbed by working with her? Finally, you have to think Bill, a doddering senior citizen who also happens to have supernatural powers, could dispatch several unsuspecting victims.

None of these central conceits seems plausible since O'Brien and Hyde never convincingly ratchet up the tension of John's search for answers. He discovers that Bill is really a killer, and then watches helplessly as Bill proceeds to dispatch several neighbors. There's no tension to cat-and-mouse scenes of John attempting to stop Bill, because John doesn't try very hard. His home life is barely affected by his stalk-y habits, partly because nobody seems to know or care about John's whereabouts. One minute he's sulking about a Christmas present, then he's out the door. Nobody follows him. Likewise, Brooke's stymied romance subplot goes nowhere; she seems only to exist in order to prove that John is (gasp) insensitive.

So again, I have to ask: what is the real difference between a teen and a psycho? If you were to watch "I Am Not a Serial Killer" without any other cultural touchstones in mind, you might wonder why a personality disorder is conflated with normal growing pains. You might also wonder why a semi-realistic horror film doesn't try to explain why some characters vanish at a whim while others stick around long enough to have their lives threatened. The arbitrary value of life in "I Am Not a Serial Killer" makes its nature as an ostensibly character-driven mystery that much harder to swallow. Don't bother with this nonsensical time-waster. 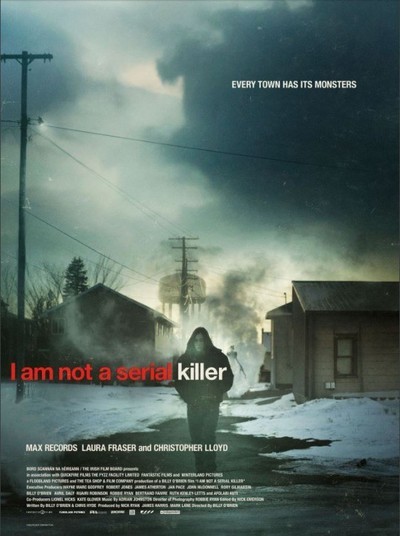 Matt Roy as The Drifter