“Hypnotic” is a thriller about the dangerous power of hypnotherapy, but is it powerful enough to stick in your brain even a week after you’ve watched it? This slick and cheesy Netflix movie only occasionally rises to the potential of its wild premise, thanks mostly to a crazy-eyed, licking-his-chops performance from Jason O’Mara. He knows exactly what kind of material he’s working with here. For the most part, though, “Hypnotic” is dopey, but never quite dopey enough.

Not to be confused with the Ben Affleck/Robert Rodriguez movie of the same name that’s currently in production, “Hypnotic” stars longtime horror actress Kate Siegel (“The Haunting of Hill House,” “Midnight Mass”) as a woman named Jenn, who’s in flux. She’s an unemployed software engineer who recently broke up with her long-term boyfriend (Jaime M. Callica), and she’s feeling stuck. We know she’s sad because she wears baggy, mismatched sweats all day, and not the overpriced loungewear that’s become fashionable during the pandemic.

At a housewarming party for her best friend, Gina (Lucie Guest), Jenn meets Gina’s therapist, Dr. Collin Meade (O’Mara). Our first red flag about him should be the fact that he’s socializing so freely with his patients (our second being his propensity for pairing turtlenecks with blazers). But he’s quietly intriguing with his steely, blue eyes and rich, resonant voice—O’Mara has played Batman in several animated DC Comics movies—so Jenn decides to visit him for a session and work through her issues. The lurid, black-and-silver office décor and a split diopter shot are early indicators that Dr. Meade’s intentions might not be entirely honorable. (They’re also indicators that directors Matt Angel and Suzanne Coote have seen a lot of Brian De Palma movies).

Still, an hour under hypnosis flies by as if it were just a few minutes, and when Jenn awakens, she instantly feels unstuck. “I think you might be more open to suggestibility than you imagined,” Dr. Meade purrs with a gleam in his eye. But when she suddenly can’t account for giant chunks of time and bad things happen to the people around her, she starts asking questions. In playing amateur detective, she laughably Googles the phrase “hypnosis crimes” and then prints out the actual results to make her argument to the skeptical Gina.

Meanwhile, Dr. Meade has a knack for ubiquity, showing up wherever Jenn goes, gaslighting her with smooth responses to her every concern, messing with her mind even further. A low-key Dule Hill doesn’t get much of a character to play as the Portland police detective who’s been investigating Meade’s patients—and the untimely demise so many of them seem to suffer—for years. It’s also convenient (and unlikely) that he doesn’t have a cell phone charger in his car, rendering him unreachable at a key moment.

What’s actually going on here is so simple, yet so insane, that you wish the filmmakers had explored it for maximum screaming-at-the-screen enjoyment. The possibilities for what Dr. Meade’s doing here are boundless, and have provided the foundation for more intriguing psychological thrillers in the past. (Naming those titles would give too much away, sorry.) Angel and Coote worked from a screenplay by Richard D’Ovidio, who also wrote the 2013’s “The Call,” starring Halle Berry as a 911 operator chasing down a kidnapper. That was a legitimately tense B-movie featuring several go-for-broke action sequences and a driven heroine at its center with a laser-like focus on her goal. Nothing nearly so compelling occurs in “Hypnotic.” Up until the busy, noisy climax, Siegel’s performance consists mostly of reacting to what’s being done to her. There’s not much to her character beyond her appearance, which is crucial to Dr. Meade’s attraction to Jenn. And at one point, when she knows he’s after her and her life is in danger, she simply goes back to her apartment and curls up on the couch.

Then again, that’s probably the same position you’ll be in when you’re scrolling through Netflix and stumble upon “Hypnotic.” Snap out of it. 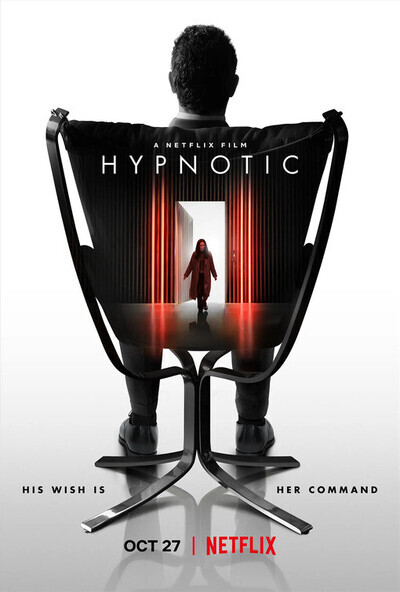