Mike Flanagan’s “Midnight Mass” sees the talented writer/director move from adapting Stephen King to crafting a project that feels so distinctly like one of the horror master’s works that even fans will wonder how they missed its book release. With elements of The Stand, The Shining, and Salem’s Lot, Flanagan’s study of religion and immortality sometimes rekindles memories of actual midnight masses in that it can be a little exhausting in its preachiness with a few too many monologues. While there are some excellent performances and engaging themes, it also turns out that Flanagan, when untethered from the plot of source material like The Haunting or Doctor Sleep, can get a little too wordy and repetitive for his own good. If this were a King novel, it would be one of those 900-page behemoths that often goes unfinished by readers, and those who did barrel through it would admire the ambition of the authorial effort while also wondering if an editor might have helped.

Again like a lot of sermons of my youth, “Midnight Mass” is abundant with connected themes and overt symbolism. Flanagan is playing with the darker side of religious scripture, connecting things like resurrection and drinking blood to a different kind of mythology. After all, horror and religion have a lot in common, often serving up similar themes of morality and vanquishing of evil, only in different cloth. Some of Flanagan’s most ambitious elements here play with the idea that The Bible truly is a horror story, while also weaving very King-like themes into the fabric, primarily the conflict between human responsibility and the thinking that belief can wash away all sin.

The vast majority of “Midnight Mass” takes place on a rundown island fishing community called Crockett Island. Actually, most of it takes place in the decrepit church, St. Patrick’s, which is newly led by a young charmer named Father Paul (a truly fantastic Hamish Linklater, whose work here almost justifies a look on its own), a charismatic leader who has been sent to replace a man named Monsignor Pruitt. Coinciding with Father Paul’s arrival is the return of the island’s prodigal son, Riley (Zach Gilford), who has been in prison for four years after a drunk driving accident that killed a woman. In a very “The Haunting of Hill House” manner, Riley is even directly haunted by his victim, amplifying his need for some kind of redemption. The sinner and the savior coming to Crockett Island at the same time feels like fate.

While Riley and Paul are the center of “Midnight Mass,” Flanagan fills out the community with memorable characters, most of whom have suffered the kind of loss that brings them to a church for guidance, including grief that pushes them to seek a higher purpose in the world. Riley’s parents Annie (Kristin Lehman) and Ed (Henry Thomas) are St. Patrick’s regulars, but his old friend Erin (Kate Siegel) has some more questions about the purpose of faith given her dark past. The strident Bev Keane (Samantha Sloyan) is the kind of committed soul who will follow religious figures down any dark path in the name of God, while a small cadre of non-believers cast a skeptical eye at what’s going down under the cross in the middle of the night, including a doctor (Annabeth Gish) with an ailing mother (Alex Essoe), the new sheriff (Rahul Kohli) in town, and a local drunk (Robert Longstreet) with, wait for it, a dark past.

If you’re wondering how the 29-year-old Essoe plays the mother of Annabeth Gish, you should be warned about some truly dicey old-person make-up that’s kinda necessary for the plot while also a bit misguided. Without spoiling anything, it will be clear pretty early why younger performers like Thomas and Essoe are playing roles beyond their years, but it’s never anything less than distracting. In fact, the effects of “Midnight Mass” are generally inferior to both “Haunting” projects. This show is not heavy on them, so it’s a minor complaint, but when it does explode into horror action, it turns into more of a B-movie production than either “Haunting.” Without spoiling, Flanagan has always worked better with shadows in the dark than when he has to reveal them.

It’s also, believe it or not, talkier than both “Haunting” projects. Riley may be relatively stoic, but people sure do love talking to him, particularly Father Paul and Erin, both of whom get long speeches about religion, God, alcoholism, addiction, the afterlife, and much more. This is a monologue-heavy show, which could throw off people looking for shivers. That’s not Flanagan’s game here—he’s more interested in philosophy and faith than he has been before, directly asking questions about morality and sin. Most of the lengthy conversations are well-scripted, engaging enough in their dialogue, but they also drain a lot of the momentum from the piece, especially after a major revelation mid-season then leads to a couple of episodes of intense discussion when viewers are going to be looking for the bloody stuff.

What is the opposite of a miracle? Why do some of the faithful get blessings in their life while others face only torment? These are deep, complex themes for a Netflix Original series, and it’s a credit to their deal with Flanagan that something this complex exists. And yet I come back to that King comparison. Even though I’m a huge fan, I can admit that his themes and concepts sometimes overwhelm his plotting. He’s prone to tangents that don’t serve the greater purpose and has a habit of underlining his ideas instead of trusting readers to unpack them. And yet he’s still such a consistently entertaining craftsman (strongly recommend his recent Later and Billy Summers, two of his better late-career offerings, by the way) that fans can easily forgive his tendency for abundance and overcooking. Perhaps the greatest compliment I can pay Flanagan and “Midnight Mass” is that all of those feelings I’ve had about King’s work over the last four decades consistently hold true for him too. While I can see the flaws in this overheated homily, there’s nothing that's going to stop me from coming back to the Church of Flanagan the next time that the doors open. 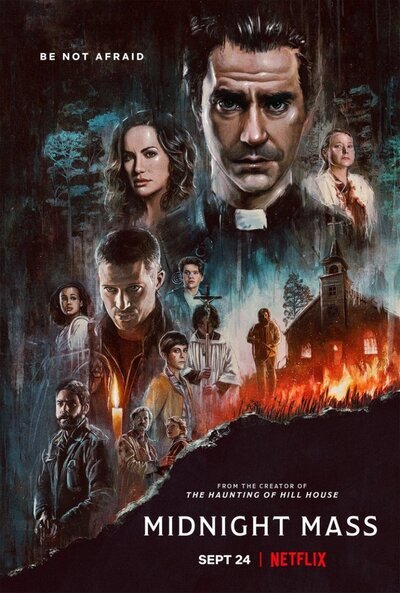