Early in "Hunter Gatherer" there's a scene where the movie's ex-convict hero, Ashley Douglas (Andre Royo), walks down a Los Angeles street holding a long ladder and asking random people if they want to buy it. "Hey, you guys want a good deal on a ladder?" he asks two men sitting outside of a store. "We don't buy no stolen goods here, man," one of the men replies. "For your information," Ashley says, "my mother gave me this ladder."

I laughed hard at this. Why? There's nothing in the dialogue that indicates a laugh-out-loud moment; it's just another low-key exchange in a movie filled with them. I can't imagine a lot of other people finding it as funny as I did; comedy is so subjective. But I laughed. Maybe I laughed because of how Royo, one of the stars of "The Wire," says "my mother gave me this ladder," with faint indignation and exasperation, as if he—a shameless hustler who turns every other exchange into a negotiation, a loser who carries himself like the king of the world—is hurt by the accusation.

But here's the unexpectedly fascinating part about this scene, which is as subtle as most of the rest of "Hunter Gatherer": we don't know if Ashley stole the ladder. All we know is that his mom (Celestial), whom Ashley moved in with after being released from prison, asked him to move an old refrigerator out of her backyard, and instead of doing it ("It's too heavy," he mutters, without even touching it), he decided to sell a ladder lying on the ground  behind the refrigerator. There's no scene where Ashley asks his mom if he can sell the ladder, just a cut to him carrying the ladder down the street. So maybe Ashley is right to be indignant at people thinking he stole it.

Written and directed by Joshua Locy, "Hunter Gatherer" doesn't look or feel like many movies being made right now. It's about African-Americans living modestly in a black neighborhood in our second largest city, and the sense of inequity and systemic discrimination is implicit in the story, but it's a quiet, gentle film, laid back without seeming sluggish. It never veers into a brutal crime plot to juice things up (as many similarly-set movies tend to do), nor does it feel compelled to make a statement about anything other than its eccentric characters' relationships to each other and the wider world.

Ashley gets a new best friend in Jeremy (George Sample III), a slightly slow man who has access to a battered pickup truck. They transport Ashley's mother's refrigerator to a disposal facility, only to learn that it costs $100 to drop it off because refrigerators use freon, which is considered a hazardous material. Ashley decides to start a used refrigerator resale business, and leans on Jeremy to help him round up old fridges and store them in his mother's backyard until he can figure out the rest of his plan.

Then we get to know Jeremy, who is determined to fix his grandfather's homemade respirator and makes money on the side letting his body be used for medical tests. "One time they cut off my pinky toe and reattached it with a laser," he tells Ashley, as matter-of-factly as if he'd had a wart removed. Ashley tells people he's striving to win back his girlfriend Linda (Ashley Wilkerson), who he lost during his prison stint through sheer neglect; if he'd only written her one letter, she tells him, she might not have taken up with a kindly garbageman named Dwayne (Antonio D. Charity). But Ashley's probably not as hung up on her as he seems to be. "I'm always gonna love me some Linda," Ashley proclaims at one point, even though he immediately gets another relationship going with Jeremys' winsome aunt Nat (Kellee Stewart). Linda is Ashley's excuse to begin a haphazard search for redemption that transforms "Hunter Gatherer" into a late-sixties, early-seventies-style shaggy dog character movie, in the vein of "Midnight Cowboy" or "Scarecrow." Movies like that are often about characters who want to be redeemed in some mysterious way, but are less-than-sensible in how they go about it.

The movie's tone is so striking partly, I suspect, because Locy is a young white man, working in an indie hipster mode, with compassion and a certain level of understanding, but with a predominantly black cast. (One of the film's producers is David Gordon Green, a white filmmaker from the American South who made his debut with "George Washington," likewise a no-budget indie populated by actors of color.) At times "Hunter Gatherer" reminded me of an early work by Jim Jarmusch ("Stranger than Paradise," "Down By Law"), other times Spike Lee's "She's Gotta Have it" and Charles Burnett's "To Sleep with Anger," not just because it substitutes characterization and performance for scope and has sympathy for people living on the fringes of society, but also because it gives black actors the chance to appear in the kind of indie flick that's nearly always populated by white actors, makes the milieu working class to poor rather than comfortably middle class (as most indie hipster movies tend to do), and builds scenes not around a propulsive plot, but around characters saying things that you or I might find odd as if they were perfectly natural.

Ashley digs hole after hole in a backyard searching for a buried toolbox containing "my emergency objects." He starts one conversation with Jeremy by lying on the pavement and daring him to move him; it proves surprisingly difficult. Even characters who have one or two scenes are allowed to show us a kooky side. When the medical testing supervisor asks Jeremy if he wants something, like a glass of water, he tells her he could really go for a steak and fries, and she presses a button on a medical testing device as if it were an intercom and says, "Tammy, we'd like a filet mignon and a side order of fries." Then she laughs at her own joke and asks Jeremy if he'd mind upping the number of patches he's been wearing to four, because they rarely test a young man of his race and demographic profile and they're intrigued by the results they're getting.

Not everything in the movie works. It's another film that might have made a perfect 45 minute featurette but that feels obligated to stretch itself out to ninety for marketplace reasons; there are detours into surrealism that feel like an honorable but failed attempt to pull of the sorts of effects that Federico Fellini once achieved; and there are a couple of quasi-psychedelic bits (including one where a couple of faces pass through each other) that don't work because the director doesn't really seem temperamentally suited to that kind of filmmaking.

"Hunter Gatherer" is at its best letting strangeness seep into situations that are presented realistically, as in the montage of Jeremy being fitted with four large patches, each with a metal bud sticking out that can be attached to electrodes. We never find out what these patches are for, just as we never find out why Ashley was in prison or whether he asked permission to take that ladder. The things we don't know make "Hunter Gatherer" feel like more than strained whimsy. That and the performances, Royo's most of all. The character is a legend in his own mind, but he lingers in yours, too. 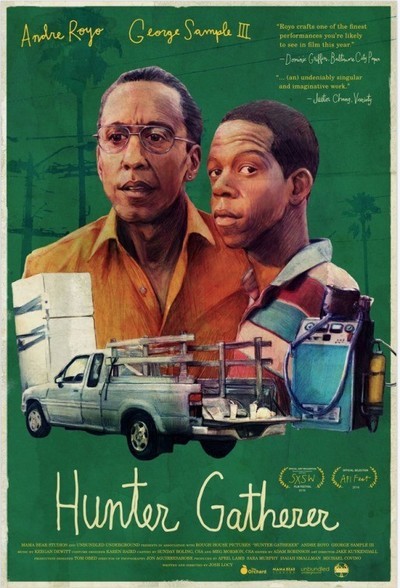