What movie was star Jemaine Clement acting in while existentially working on the otherwise awful domestic comedy "Humor Me," and why weren't any of his fellow performers in it? Everyone else that's on-screen in writer/director Sam Hoffman's trite dramedy about personal redemption delivers mediocre performances, even head-lining co-star Elliott Gould. Only Clement, as self-absorbed playwright Nick (Clement), transcends the lousy bill of goods he's made to sell. And boy, is that saying something given how hopelessly out of touch Hoffman's comedy is on almost every other level.

If you look at Clement's subtle, brittle mannerisms, you can see glimmers of what might have interested him in Nick, a creatively blocked, mojo-less narcissist who tries to get his life together with the help of his estranged, stereotypically neurotic old dad Bob (Gould). You'll also see untapped reserves of wounded pride, and unqualified egotism that Hoffman never explores. And in a couple of scenes, you may even wonder what might have been had "Humor Me" been about the character Clement is playing rather than the one that Hoffman wrote. The jarring difference between these two versions of an otherwise forgettable protagonist is vast, and rather distracting.

Let's start with the character as conceived by Hoffman. Nick's the kind of guy that decades of mediocre movies have taught us deserves a second chance. Sure, there are things in his life that he can work on, like his self-sabotaging tendency of tweaking his work, or his general lack of discipline. But when we enter Nick's world, it's at a point where many doors are slamming in his face, and everybody seems to be out to get him. His latest play has shut down production because he failed to commit to an ending. His agent doesn't want to talk to him. His wife is leaving him for a French billionaire, and is taking Nick's doe-eyed son Gabe (Cade Lappin) with her. Also, Nick's rent is due, and he can't afford to pay up. So he retreats to Bob's retirement community, where even the stereotypically sassy African-American security guard sneers at Nick.

While staying in Bob's guest room, Nick plods along a completely hackneyed journey of self-discovery. He learns self-respect from a group of older women, all of whom are cartoonishly sassy and/or horny. And he learns to open himself up to loving others from reformed bad girl Allison (Ingrid Michaelson), the daughter of one Bob's neighbors. Nick also worries about his dad, specifically Bob's physical health, and his tendency of avoiding difficult subjects (especially the death of Nick's mother). To get over his own emotional hump, Nick must power-walk, dress-rehearse, and toke his way to good health. Life may be unfair, man, but it can be good if you open yourself up to other people, and stuff, you know?

Phooey. "Humor Me" is the kind of lame, unimaginative comedy that constantly takes cheap shots at elderly characters, and then turns on a dime and begs you to see the humanity in them. There's nothing more gag-worthy than a scene where hot-to-trot has-been actress Helen (Le Clanché du Rand) sits Nick down, and shows him a scrapbook that includes a photo of an old flame (in real life, the man in the photo is Keith Richards; this is one of the only funny gags in "Humor Me"). This is shortly after Helen purrs "I like my saké cold, and my men hot." This kind of bush league, wannabe Catskills humor may be amusing, provided you enjoy being condescended to. But it's especially grating when your movie is about a self-involved screw-up who inevitably makes good just by becoming more sensitive to the people around him.

What, you might ask, does Clement do that's so striking? Well, he slouches, touches his chin, and shuffles his feet in a way that makes you believe that Nick is self-pitying, and totally full of himself. His accent may not be great, but his body language says so much about this character. And his inflected line readings make you believe that he's not just playing the character as a variation on his usual man-baby persona. His squinting, pouting, and general petulance is shockingly charming, a quality that almost single-handedly makes Nick a compelling character.

Alas, the dialogue, and general character arc that Hoffman saddles Clement with is too heavy. "Humor Me" is so bad that not even Gould, a brilliant character actor whose recent performances are sadly spottier than his heyday, can do a lot with a few dick jokes, and wiggles of his iconic caterpillar eyebrows. Unfortunately, Gould disappears into the role of Bob, and never in a good way. Sure, he's sufficiently twitchy, and believably wounded, but there's also a flat-ness in his voice that makes him sound like an amateur performer rehearsing with equally lifeless performers at a preliminary table-reading. Clement may deliver another low-key great performance, but you can't expect him to carry "Humor Me" when not even the star of "The Long Goodbye" is strong enough to help him shoulder such a ponderous weight. 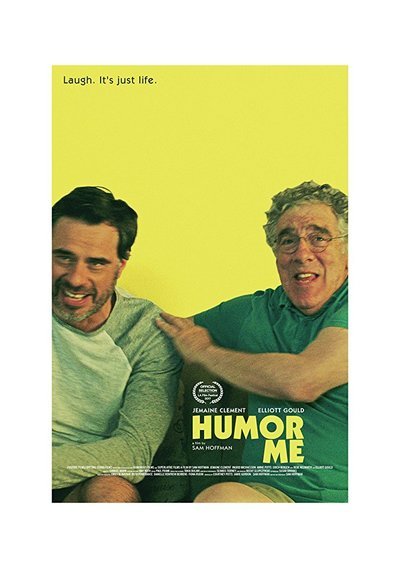