“Human Capital” is so exquisitely cast, down to the smallest role, that it puts viewers in the unusual position of wishing a film were a TV series or a much longer movie, the better to take advantage of its best assets. Written by Oren Moverman (“The Messenger,” “Rampart”), directed by Marc Meyers (“My Friend Dahmer”), and cast by Stephanie Holbrook, it’s a drama about adults (and a handful of teens) who could plausibly exist, stuck in bad situations that could actually happen. This is a rare and beautiful thing in an era when self contained features of this type have a hard time getting funded.

But the time-shuttling script is too formally playful for its own good. At times it’s so insistent in its narrative flourishes that it practically grabs the audience’s head and twists it to force it to look in another direction, even when what’s onscreen was plenty fascinating thanks to the electricity between the actors, and there was no risk of boring us by staying in a moment long enough to drink its marrow. And it's too attached to a narrative hook that ironically keeps yanking the viewer away from what's most gripping about this story.

Liev Schreiber, a rare leading man who is equally believable as a genius or a meathead, plays Drew, a real estate agent who lands in the middle of that continuum. He’s smarter than most guys but not smart enough to see the pit he’s about to fall into. Drew’s daughter Shannon (Maya Hawke) is a high school senior who’s in a failing relationship with the academic superstar son of a hedge fund manager, Quint Manning (Peter Sarsgaard). This connection leads to Drew and Quint becoming tennis doubles partners and gives Drew the chance to invest in what looks like a financial sure thing. Unfortunately for Drew, a man who’s loaded by working class Brooklyn standards but a pauper by Quint’s, doesn’t have the minimum $300,000 required to purchase one share. So he hustles and lies to scrounge up the funds.

As you might expect, things don’t go as planned, for anybody. The ensuing domino-chain of misery links Drew’s second wife Ronnie (Betty Gabriel of “Get Out”), a therapist pregnant with twins; Quint’s miserable wife Carrie (Marisa Tomei), a onetime actress who thinks buying and renovating a movie palace will fill her empty spaces; a professor and film programmer, appealingly played by Paul Sparks, who puts the moves on Carrie; Shannon, a headstrong and impulsive young woman who’s currently in treatment with Ronnie; Jamie, who’s in denial about his sexuality and resentful of his father and mother’s pressure to excel; and a troubled young man named Ian (Alex Wolff) who connects with Maya and inflames her destructive tendencies.

It’s a pleasure to watch actors of skill go at each other in scenes where every character is cleanly defined, yet layered enough to set up moments of contradiction and surprise. Schrieber and Sarsgaard are both aces at making you wonder if their characters are as smart as they believe themselves to be. Saargard also captures something essential about men in the United States who got rich by moving money around rather than by making things. He, moreso than any major character, is the sort of person who thinks of others as capital, seed funds that can be nurtured or squandered but don't have innate value. He thinks he’s one of the “good ones,” a wizard of dollars who appreciates beauty in all its forms. But deep down he’s a shark with a sickly-warm smile, a man who would rather chew up friends and relatives than give up wealth and status. (His reaction to Drew’s anguish is chilling: he resents being forced to witness another man’s disappointment in him.)

Tomei is devastating as a woman whose self-worth was bound up in beauty that aged like wine in a Red Bull nation. She’s been a trophy for so long that she can only reconnect with the theatrical and cinematic art she abandoned by building it a luxe new home with hedge fund runoff. Hawke’s raw-nerve sincerity binds the film’s unstable and flagrantly melodramatic third act, which hinges on a handful of scenes between Hawke and Wolff that exude more heat and intelligence than most teen romances manage in two hours.

But damned if “Human Capital” doesn’t undermine and undervalue its actors even when it’s giving them rock-solid material to play. The script withholds a key piece of information—the identity of a hit-and-run driver who injures a waiter riding home on his bike—for such an unconscionable length of time that the film begins to seem as if it lacks faith in itself. The faux-mystery of who ran over the cyclist is as shallow and contrived as the characterizations, performances, and cinematography (by Kat Westergaard) are thoughtful. The gimmick has little organic connection to the film’s themes of class and generational resentment. It's a narrative Plan B for a movie that didn't need one. Tell this same story in sequential order and it's a American Mike Leigh film, dependent entirely on the delineation of characters' ethical and spiritual crises. That's probably not enough, but imagine if it were.

Parenthetically, or maybe not: it wasn’t until two-thirds of the way through this film that I realized that I felt like I’d seen it before because I had. I reviewed the first adaptation of “Human Capital” for this very publication, but apparently it left so little impression that when I typed its title into the RogerEbert.com search bar, I was surprised when my byline popped up. I liked this version slightly more than the Italian film, which was more archly stylized and cartoonish, but not enough to recommend it even as part of a compare-contrast exercise.

Granted, much of the movie's storytelling strategy is imported (literally) from Paolo Virzi's same-named Italian film, which is drawn from a novel by US writer Stephen Amidon. That this story circled the globe between source, first adaptation, and remake might explain the everywhere-and-nowhere tone, which feels not quite American yet not exactly global; as well as the film’s frustratingly unrealized engagement with the values that surround and define its characters.

Another, more damning problem: Meyers and Moverman engage with the self-justifying coldness of capitalism more straighforwardly than most American feature filmmakers, but not deeply enough to realize that if you’re going to indict the privileged for being indifferent to the marginalization and abuse of laborers, you should give us a story about the cyclist, too. Neither film version of “Human Capital” has spent more than a few minutes of screen time on the waiter who was left for dead in a ditch. This story is throwing stones from the inside of a glass house. 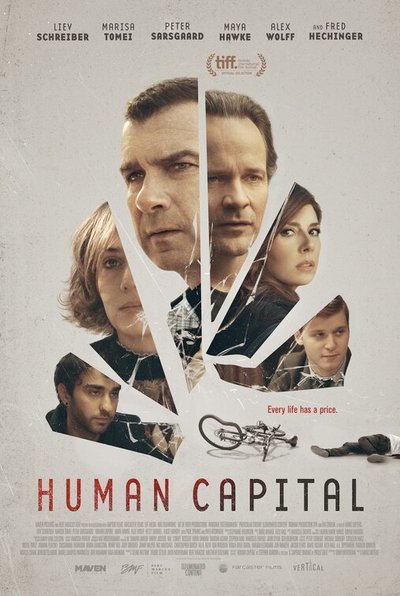