How to Survive a Pandemic

With the planet teetering on the precipice of World War III, it’s rather horrifying to observe the sheer number of people rooting against the survival of their own species, if only to speed up the self-fulfilling prophecy of a Second Coming. Watching David France’s “How to Survive a Pandemic,” the latest ripped-from-the-headlines pandemic-era documentary, makes one almost nostalgic for a time when Covid and pervasive misinformation were the biggest threats facing the future of mankind. It’s a pointedly titled follow-up to the director’s Oscar-nominated portrait of the heroic activists who raised awareness of the AIDS epidemic, 2012’s “How to Survive a Plague.” There is enough material in France’s new picture to fill an extensive miniseries, yet by cramming it all into a 106-minute running time, the film occasionally plays like a feature-length infomercial for vaccines, complete with a slick and intrusive score marked by angelic flourishes. What this leaves the film with is a series of micro-vignettes that don’t spend enough time on the urgent message spelled out bluntly over the end title cards, namely that a mere eight percent of people in low-income countries had access to vaccines in 2021, a direct result of the inequities in global distribution that led to an estimated one million lives being needlessly lost.

There are echoes of France’s decade-old predecessor when the film reminds us of how life-saving drugs were not made available to AIDS patients in sub-Saharan Africa until the 2000s, despite the fact that HIV was no longer a death sentence in the United States by 1996. Dr. Tedros Adhanom Ghebreyesus, the Director-General of the World Health Organization viewers have become well-acquainted with in previous Covid documentaries, reveals during the film’s final moments that he delayed his own vaccination until the people in his home country of Ethiopia received access to them. Ghebreyesus flatly states that the refusal of companies to share the recipes and data regarding their vaccines is fueled by greed. Had the film made this its primary subject, it may have been on par with the essential cinematic exposés on this crisis, the best of which remains Nanfu Wang’s “In the Same Breath.” As it stands, “How to Survive a Pandemic” is inherently engrossing considering its subject matter, but may have benefited from more time in the editing room. It’s downright strange how a huge stuffed bear seated across the table from the FDA’s Dr. Peter Marks in his quarantined office gets roughly as much screen time as Dr. Anthony Fauci.

Science Magazine’s senior correspondent Jon Cohen serves as the film’s amiable guide, conducting interviews with experts such as Fauci, who claims to be the only man on President Trump’s task force who has the guts to tell his boss what he doesn’t want to hear. Trump’s desire to rush out a vaccine prior to his reelection makes him have zero patience for the safety tests Fauci says are crucial to run. Of course, Trump’s interest in making vaccines accessible grinds to a halt as soon as he loses the 2020 election, refusing to concede and allow Biden to assemble his own team. Though we briefly see Cohen arguing with a stereotypical Trump supporter proudly wearing a “Fuck Fauci” hat, the film is essentially preaching to the double-boosted choir, not making time to truly investigate why so many intelligent people—including members of my own family—have refused to be vaccinated, falling down the rabbit hole of QAnon conspiracy theories. When another anti-vaxxer insists that the former president would refuse the vaccine himself, she seems to have forgotten how Trump fell ill with Covid, and the vaccine is likely the reason why he is still alive.

Some of the strongest stretches of the film center on the impassioned Rev. Paul Abernathy, who attempts to get Pittsburgh’s reluctant Black populace vaccinated, despite their entirely justifiable skepticism. In an all-too-brief voice over, Abernathy notes that it isn’t just the monstrously unethical Tuskegee Syphilis Study, which led to the deaths of 128 Black participants, that is the reason for citizens of color to have this hesitancy. It’s also the numerous ways in which institutional racism had led their community to be neglected and underserved for generations, as recently illustrated by the absence of nearby Covid testing sites. The reverend singles out the African-American co-developer of Moderna’s mRNA vaccine, Dr. Kizzmekia Corbett, as a way to grab the community’s interest, and when a local man begins voicing QAnon propaganda, Abernathy provides a counterpoint with a Bible quote ordering those of faith to honor their physicians. Meanwhile, world leaders borrow Trump’s bullying rhetoric to downplay the importance of vaccines, with Brazil’s equally reprehensible president Jai Bolsonaro referring to those heeding caution due to the pandemic as “sissies.”

Though the film is divided into two parts, more than half of the film’s running time is devoted to the race to create the vaccine, resulting in its historic and unprecedented completion eleven months into the pandemic. So much attention is given to the noble intentions of Dr. Dan Barouch, the lead scientist for the Johnson & Johnson vaccine that the film occasionally devolves into corporate PR, going out of its way to make the company look good while downplaying the problems with its vaccine which resulted in its rollout being paused. To be fair, The New York Times recently reported on mounting data allegedly illustrating that the vaccine is just as effective as Pfizer and Moderna, though according to CBS News, it is less effective against fighting the Omicron variant. Of course, with scientific analyses changing by the day, no current film about Covid can be released without immediately looking dated. The global death rate has already jumped a million higher than the most recent statistic shown in the film from October 2021, a further indication that Cohen is correct in suggesting that tomorrow may be, to contradict a certain redhead, much farther than a day away. I doubt “How to Survive a Pandemic” will alter anyone’s opinion regarding the necessity of vaccines, yet it does pay admirable tribute to the scientists fighting to save the world, including those stubborn earthlings who have no interest in being saved. 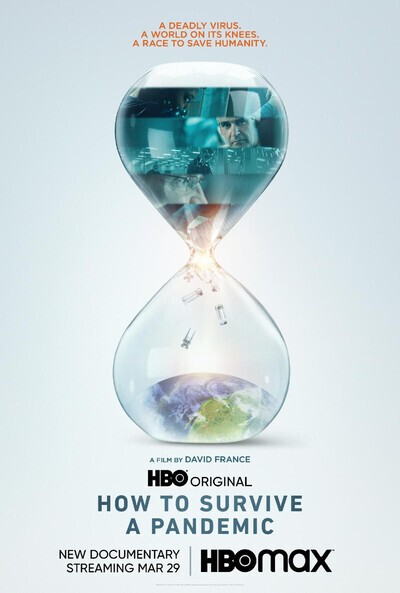