Hot on the heels of "Good Luck to You, Leo Grande," where Emma Thompson's uptight character hires a young male sex worker, comes "How to Please a Woman," an endearing, sexy comedy from Australian director Renée Webster (it's her first feature) where a woman in a sexless marriage with an unexciting job forms a company, almost on a whim, where men clean women's houses shirtless and, if desired, also provide sexual "favors." There's a little "Magic Mike XXL" in the mix of "How to Please a Woman," with its merry band of eager-to-please strippers, although "How to Please a Woman" also hearkens back to "The Full Monty" in its surprisingly profound look at pleasure. Pleasure can't be compartmentalized to one area of life, everything affects everything else. There's also some messaging here, present in "Full Monty" too, about how men and women can always do better at communicating with one another, and maybe it's preferable to be on the same side in wanting to have a better time, in and out of bed.

Gina (Sally Phillips) is a middle manager in a company called "Lifeline Liquidation" (an apt metaphor for what's about to happen). She and her husband are basically platonic roommates. She goes for long-distance ocean swims on the regular with a group of friends. For Gina's birthday, these women buy her a stripper named Tom (Alexander England), who shows up at her door and begins the bump-and-grind. She's not interested. In fact, she's horrified, but she would like him to clean her living room with his shirt off. Would that be all right? Turns out, it is. Something sparks in her, an idea of pleasure, an idea of asking for what you want in a judgment-free zone. Besides his side hustle as a stripper, Tom works for a moving company (called "Pleased to Move You," another metaphor). When Gina is let go from her job for no reason other than ageism, she decides to buy Tom's moving company (about to be "liquidated" by her former company), and transform it into a new business where the workers are men and they clean houses and also provide sex.

The coincidences necessary to keep the premise afloat (what are the odds that the random stripper also works for the company she was assigned to liquidate, and etc.) strains belief, but once the story settles in and the company is up and running, comedy and profundity ensue. The men at the moving company are surprisingly game for Gina's new business plan, although there is a bit of a learning curve. None of them have any experience with this kind of thing. The initial clients are all of Gina's friends. Tom is good at the sex part, but terrible at the cleaning part. Another guy is great at cleaning but horrible at sex. Both problems need to be addressed, which Gina does, swiftly and professionally. She's a natural-born entrepreneur. She holds interviews with potential clients in her car, listening to what they want, and how they want it. Some women want sex, others don't. Some are extremely specific. (I loved the elderly woman who said she wanted to be "edged" towards orgasm, and then experience "total annihilation.") Some have no idea how to even ask for what they want.

Steve (Erik Thomson), the owner of the moving company, heads up the IT department of this new venture, and one of the movers, Ben (Josh Thomson), handles office supplies. (One of the funniest scenes involves Ben having to "fill in" for one of the guys who can't make an appointment. Ben is in a panic. But it must be done. Ben steps up. Ben has hidden depths.) The script is extremely witty and three lines ("Could we skip dinner?" "One is never enough." and "That was a career highlight") made me laugh out loud. But Webster sneaks in those deeper moments in seemingly casual exchanges. Early on in the process, one of the movers sidles up to Steve to speak to him privately, saying, "I'm not exactly sure that I can reliably say I know how to please a woman." Steve thinks about this for a moment and replies, "If you can say that, you're a better man than most."

Of course Gina wakes up to her own massive dissatisfaction in being "invisible," in being in a sexless marriage. Is she supposed to just not want sex anymore after a certain age? She didn't sign up for that. She attempts to address the issue with her husband, and he reacts defensively, but there's something in the exchange where you can see his pain and embarrassment. If he could open up to her on that more vulnerable level, maybe they could get somewhere.

But this is not just the story of one woman getting her groove back. This is a larger story about how lack of pleasure impacts lack of pleasure everywhere else. Ultimately, it's not about having the hottest sex on the planet (although that could be true too). It's about learning to acknowledge what you want, being able to say it out loud, and then being able to show someone. You're in charge. (Think of Teri Garr in "Tootsie," screaming in hysteria: "I AM RESPONSIBLE FOR MY OWN ORGASM.") The sex workers provide a space where that exchange can take place. It's good practice for everyone.

There's something innocent about pleasure, although society (or certain elements of society) want to demonize it. Pleasure releases other things, makes other things possible. In the opening of the film, the women in the locker room chat quietly, murmuring to one another, or, more often, just shower and change in silence. The sound of that locker room is transformed by the end of "How to Please a Woman." The air is filled with chatter, with laughter, an electric buzz of brightness and aliveness. What on earth could be wrong with that?

Now playing in select theaters and available on VOD on July 29. 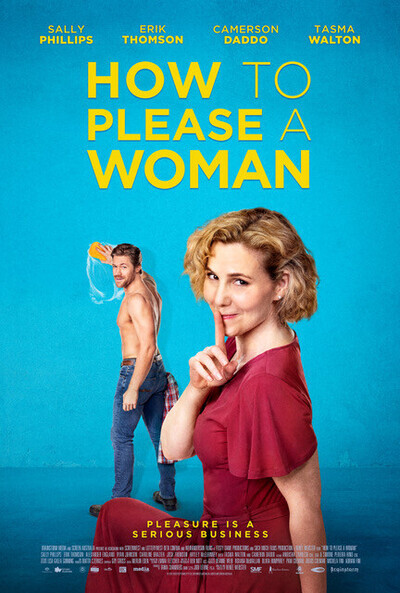