"Housebound" has all of the earmarks of a traditional horror film: things that go bump in the night, a leering doll, a giant tilting statue of Jesus, enough false scares to induce multiple heart attacks, and a creepy house with a sketchy past. New Zealander Gerard Johnstone, in his feature debut (he also wrote the script), handles all of the horror tropes well, and has a lot of fun creating a mood of almost unbearable tension. "Housebound" is a standout, though, because of its satirical mood and its multiple scenes of almost screwball comedy. It's a strange mix. It works. Johnstone's humor seems to come from an acute sense of the absurd, and maintaining a tone of both horror and absurdity is one of his major accomplishments. "Housebound" goes a bit too long, and frays when trying to tie up its loose ends (there are a couple of explanatory monologues), but other than that, it is an extremely confident and promising debut.

Kylie (Morgana O'Reilly) is going nowhere fast. In the opening sequence, she uses a sledgehammer, and then a small explosive, to bust open an ATM. As cops swarm into the parking lot, she jumps into her car and flees the scene, getting stranded on a speed bump, screaming like a feral animal. Since she has been in and out of drug rehab facilities multiple times, Kylie is ordered to live at home with her mother for a period of 8 months. She has to wear an ankle monitor that will beep any time she goes past the perimeter of the front lawn. Kylie is transported through the verdant green countryside to her childhood home, situated in an overgrown lawn filled with the gnarled crooked trees of a fairytale forest. The windows seem to peer down at Kylie judgmentally. She had left home as soon as she possibly could. Now she is trapped.

Kylie's mother is played by the brilliant Rima Te Wiata. She is a nonstop-talker of the completely inane. She is resentful, querulous, but she tries to look on the bright side. For example, as sullen Kylie is fitted with the ankle monitor, her mother says, brightly, supportively, "Aren't you lucky, Kylie, having all that high-technology on your foot?" Kylie spends her time at home sitting on the couch, watching television, eating all the food in the kitchen. She doesn't clean up after herself. Her mother tiptoes into the room, asking, almost in tears, if she can please have the television for one hour to watch her show?

Kylie's mother has always thought they had a ghost in the house, and calls in to paranormal radio shows to talk about it. Kylie makes fun of her mother for this, but soon becomes convinced that, yes, something very, very strange is going on in the house. She finds an ally in Amos (Glen-Paul Waru), the security officer in charge of monitoring her ankle bracelet who also turns out to be an amateur ghost buster. Kylie's court-ordered sessions with a condescending and infantilizing counselor (Cameron Rhodes) don't go well. Amos and Kylie start an investigation, focusing first on the house itself, before narrowing their lens onto the weird next-door neighbor with the straggly beard and the recluse habits (Mick Innes).

Some of the film's scariest sequences have to do with Kylie sneaking around in places she shouldn't be. She is a fearless burglar, with lots of practice. Amos is reduced to standing on the sidelines, watching helplessly through binoculars. O'Reilly is great as the classic misfit, angry and antisocial, contemptuous of her mum, before events start to dovetail, bonding them together. Kylie's situation is exacerbated by the fact that even if she wanted to flee from the house to save her life, her ankle monitor would go off, and she would be hauled back to meet her doom.

Jane Bucknell's production design is evocative and spooky. The house is crammed full of useless knick-knacks, detritus from a life spent never throwing anything away. The wallpaper is dark and flowered, creating a mood of claustrophobia, the walls closing in. Simon Riera is the talented cinematographer, filling the screen with dark shadows and off-kilter angles, making the house seem like an endless maze. You never get your bearings. You never get a feel for the house's layout. The house has a life of its own.

There are a couple of standout sequences, one involving a talking teddy-bear and one involving a group brawl where people fight one another using the objects closest to hand: an egg whisk, a cheese grater, a laundry hamper. These scenes shine with humor and invention. Everything makes sense, and everything is also completely absurd. Johnstone knows what he is doing, that's clear, but in the fight scene he reveals his particular stamp. It is organically funny at the same time that it is terrifying. A difficult balance to create and sustain, but "Housebound" makes it look easy. 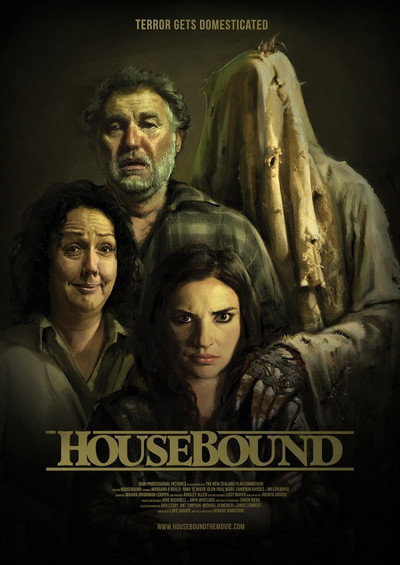