The reason why “Hotel Transylvania 2” exists is a simple one. The original 2012 animated comedy about a resort that caters to famous monsters managed to draw $358,375,603 in worldwide box-office blood.

Though I'm a longtime supporter of animated features, the recent need to churn out follow-ups to every cartoon hit only demeans a genre that thrives on imaginations, and is also aimed at impressionable children. Children should be taught to want better, not just more of the same in lesser form. Yes, the “Toy Story” series is an exception. But why the need for “Cars 2” except to sell more tie-in merchandise?

This time out, Adam Sandler co-writes with returning joke meister Robert Smigel. That Smigel sired Triumph, the Insult Comic Dog pretty much earns him a lifetime pass from me, even if this subpar sequel barely comes close to being as amusing as any run-of-the-mill “Munsters” TV episode. For Sandler, however, this is not-so-funny business as usual.

So what is the plot, you might be frightened to ask? Dracula’s daughter Mavis (Selena Gomez) weds her human beau Jonathan (Andy Samberg) and the hotel opens its doors to mere mortals for the first time in the form of her in-laws (Megan Mullally and Nick Offerman, pocketing a paycheck). She gives birth to a son, Dennis, who sports a chrysanthemum bush of red curls. Or, as meddlesome Papa Drac likes to call him, “Denisovich.”

The rest of this anemic mixed-marriage soap opera pivots on whether Dennis will grow up to be a chip off the old bat (his granddad hopes he is just “a late fanger”) and if Mavis will decide to move her brood to sunny California, even if she doesn’t know “Santa Claus” from “Santa Cruz.” To speed up matters, Dracula takes his grandson along with several of his ghoulish buddies, including Steve Buscemi’s Wolfman, Kevin James as Frankenstein and David Spade’s Invisible Man, on a road trip to the same vampire summer camp he attended to get training.

If this all sounds rather dull, that is because it is.

Judging by the youngsters in the crowd, all this boo-ha-ha failed to produce non-stop hilarity as director Genndy Tartakovsky once again relies on manic slapstick gags that rarely summon all but the briefest of chuckles. The kids seemed most pleased by a nearly mute green tub of jiggly goo known as Blobby, who can suck up random objects like squirrels into his tummy and urinate with multiple streams.

I kept myself preoccupied by trying to mine some good in the bad, although having to sit through the lamest Count Chocula reference ever made it difficult. Gomez’s youthful delivery is refreshing amidst the horror shtick. I like hearing Buscemi’s deadpan coming out of a beast who can’t control his animal instincts. I didn’t mind Jon Lovitz, who previously spoke for Quasimodo, doing a riff on the Phantom of the Opera as a kind of Greek chorus.

Also on the upside: A sweet wolf girl named Winnie (voiced by Sandler’s daughter, Sadie), who takes a shine to Dennis, delivers a rather pointed pro-female statement. That’s before she goes back to licking her would-be boyfriend’s face.

I also got my hopes up when Mel Brooks’ distinctive kvetching poured forth from Vlad, Dracula’s Nosferatu-style father, who is less than thrilled to have a human in the family. Here is a spoof king who knows how to milk mirth from old Hollywood tropes. But his entrance comes too late to do anything to elevate the proceedings.

I'm sad to report that the ending—complete with the most clichéd way to conclude any animated film, a musical number—leaves the door wide open for the inevitable “Hotel Transylvania 3.” Me, I have already checked out. 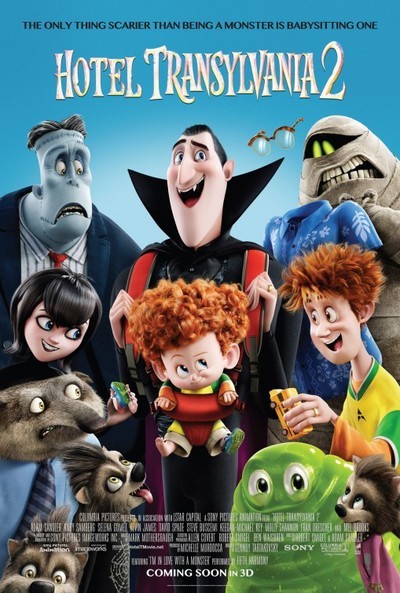 Rated PG for some scary images, action and rude humor