For fans of John Cusack, the last few years have been a fairly bewildering time as the actor whose mere presence in a film was an almost certain indication that it would be of greater intelligence, ambition and quality than most ("The Sure Thing," "Tapeheads," "Say Anything," "Grosse Pointe Blank" and "High Fidelity" to name but a few) has lately been found in a string of projects so questionable that even Nicolas Cage might have hesitated to appear in them if they had come his way. However, if the first couple of months of 2015 are any indication, those fans can be reassured that he seems to be finally turning things around at last. For one thing, his presence in David Cronenberg's startling "Maps to the Stars" indicates that he is still willing and able to tackle challenging material when it comes his way. For another, his complete absence from "Hot Tub Time Machine 2," the dreadful sequel to the 2010 comedy that proved to be a minor hit in theaters and a huge success on DVD and cable, indicates that there are indeed some things that even he won't do for money these days.

For those of you who somehow missed the original "Hot Tub Time Machine," it told the story of three longtime friends—Adam (Cusack), Lou (Rob Corddry) and Nick (Craig Robinson)—who, along with the younger Jacob (Clark Duke), who was Adam's nephew and turned out to be Lou's son, visited a dilapidated ski resort from their misspent youths and, through the aid of the titular device, were transported back to 1986 and were able to re-experience a particularly memorable weekend that had a great effect on their lives. The film was dumb, raunchy and pretty forgettable beyond its admittedly catchy title (I am struggling to recall the details and I just rewatched it yesterday in preparation for viewing the sequel) but it had a couple of funny moments here and there that took full advantage of the total absurdity of the concept and historians will note that it found room in the cast for Lizzy Caplan and Jessica Pare in the days before their respective breakthroughs on "Masters of Sex" and "Mad Men." That said, there was absolutely nothing about it that screamed "sequel" and if "Hot Tub Time Machine 2" accomplishes anything—and it really doesn't—it is that it too never manages to find a way to justify its own existence.

This time around, it turns out that both Lou and Nick have taken advantage of the time machine to manipulate events to their advantage—the loathsome idiot Lou is the often-shirtless and enormously rich founder of the technological marvel that is Lougle, while failed musician Nick is having hit after hit with songs that he has been cribbing from people who aren't even aware that they are being ripped off—while Jacob is reduced to serving as Lou's long-suffering butler. (Adam's absence is explained away in the vaguest manner imaginable.) At one of Lou's lavish parties, one of the many people with a grudge against him shoots him (in the crotch, ha ha ha) and before he can bleed out, Nick and Jacob drag him to the magical hot tub (don't ask) with the plan of going back in time in order to save Lou's life and find out who shot him.

Alas, things go screwy and the three wind up going 10 years into the future into what may be an alternate universe in which the past is the future and vice versa, and in which Lou has not yet been shot. While trying to find Adam, who they suspect of having pulled the trigger, the three come across Adam's son, Adam Jr. (Adam Scott), a straight arrow about to marry his equally prim sweetheart (Gillian Jacobs), and he joins up with them on the search. Along the way, the guys become embroiled in a game show in which washed-up celebrities are forced to do whatever the studio audience votes on, find themselves pursued by a self-driving smart car that also develops an urge to kill Lou, overindulge in any number of chemical substances with often-icky results and have heart-to-heart talks that are more difficult to take than usual since most of them involve the increasingly odious Corddry.

The original "Hot Tub Time Machine" was a dumb movie, of course, but it at least tried to approach its dumbness in a smart way. Here, despite the return of director Steve Pink and screenwriter Josh Heald (who co-wrote the original and who goes solo here), this installment is a dumb movie that seems hell-bent on becoming dumber and cruder with each successive scene. The dialogue is vulgar as all get out without every being particularly funny for the most part (there are a couple of amusing bits where the guys riff on what the others look like but this bit gets old really fast), the gross-out stuff is really gross (if you can name a bodily fluid, it is expelled in abundance here) and whatever wit and cleverness there was on display the first time around has been replaced with such witty moments as a depiction of the lighter side of virtual reality near-rape.

Unless the idea of a half-naked Rob Coddry acting like the worst human being imaginable (a far cry from the occasionally sympathetic version of the character seen the first time around) for 90 minutes strikes you as comedic gold, "Hot Tub Time Machine 2" is pretty much a total waste of time and energy. It looks cheap, the story is little more than a string of haphazardly constructed scenes with little to offer either narratively or comedically, the characters are far more irritating than endearing this time around and without Cusack's laid-back presence to ground things, his co-stars spend most of their screen time riffing and scatting with great bluster and little effect. And even though the whole enterprise looks and feels like a direct-to-video enterprise, it ends on a note that suggests the possibility of a "Hot Tub Time Machine 3"—while I suspect that such a thing will never actually see the light of day, may I suggest that if it does, it should involve the characters going back in time (or forward or whatever) in order to ensure that "Hot Tub Time Machine 2" never exists. 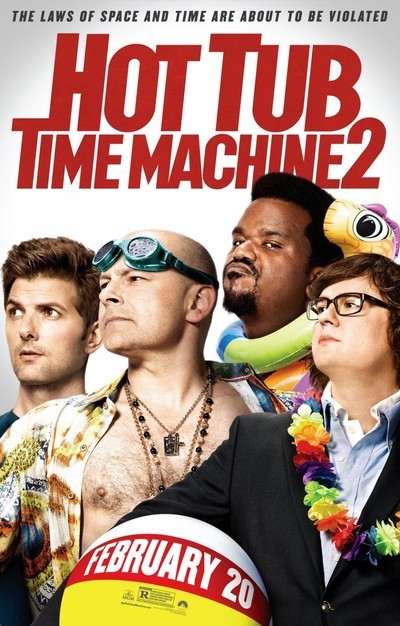 Rated R for crude sexual content and language throughout, graphic nudity, drug use and some violence