The law of diminishing returns, which has afflicted so many comedy sequels over the years, strikes again in “Horrible Bosses 2,” further proving that just telling the same joke with a dirtier punchline isn’t quite as funny as hearing it for the first time. Fortunately, the energy of the cast, particularly newcomer Chris Pine and the always-endearing Charlie Day, keeps it from falling apart completely, despite an arguably offensive, juvenile, and repetitive script from Sean Anders & John Morris. The relative relatability of the first film—following average guys forced into extreme behavior by their sociopathic bosses—has been replaced by pure slapstick, often of the “gross-out humor” variety. Morris & Anders, who also directed, literally repeat many of the same set-ups and punchlines from the original “Bosses,” only more crassly this time and with more discussion of bodily fluids. And nothing is quite as cinematically desperate as someone telling you a joke you’ve already heard only louder.

Straight man Nick (Jason Bateman), horndog Kurt (Jason Sudeikis), and comic sidekick Dale (Charlie Day) have started their own business, named, of course, “Nick & Kurt & Dale.” After a television appearance goes horribly wrong, our three stooges run into trouble getting the financing for their sure-to-be-popular “Shower Buddy.” They turn to investor Rex Hanson (Pine) and his infamous father Bert (a depressingly wasted Christoph Waltz), who agree to finance the first wave of Shower Buddies to hit the market. Of course, it’s all a scam, and the Hansons plan to bankrupt and takeover the business. When it looks like they have no other recourse, Nick & Kurt & Dale plot to kidnap Rex and hold him for ransom. Small problem: Rex is crazy. And our heroes are relatively moronic. That’s a dangerous combination. It all leads to misunderstandings, violent escapades, and plot twists that allow for the over-sexed Julia (Jennifer Aniston), double-talking “Motherf**ker” Jones (Jamie Foxx), and even convicted Dave (Kevin Spacey) to return for the fun.

There was a time when it was rumored that the sequel to “Horrible Bosses” would find Bateman, Sudeikis, and Day in the boss roles with three new guys looking for revenge against them. The idea that we all become the boss we hate could have made for a really clever twist on the comedy sequel, although that would have been a narratively risky proposition, and the problem with “Horrible Bosses 2” is that risk was never in the equation. It’s a comedy with no surprises. Spacey’s verbal abuse, Aniston’s raunchy declarations, Foxx’s faux bravado—we’ve literally seen it all before. Just three years ago. And the first film worked because of the surprises it held—especially in the unexpected extremes of the characters played by Spacey, Aniston, and Colin Farrell. Without those extremes to offset the straight guys at the center, this sequel gets surprisingly boring very, very quickly. Pine brings it some nice energy, but Waltz feels completely out of place, as if the writers were too busy with their old characters to think of something for a new one to do.

The few charms of “Horrible Bosses 2” come from the energy of the central cast. Sudeikis has turned his aloof idiot routine into something surprisingly charming, while Day steals the movie yet again with his remarkably likable naïveté (although I don’t remember Dale being quite this dumb in the first movie). And Bateman is nearly unmatched in the department of comic exasperation.

Ultimately, “Horrible Bosses 2” comes across as more depressing than humorous, in that all of these performers are undeniably more talented than the material they’ve been given. As they go through the motions of a distractingly similar plot, one can’t help but think about the original places the story could have gone if the creators of this sequel had been willing to take a risk and tried something new, instead of just something raunchier. Then again, their studio bosses were probably too concerned about the bottom line to take a chance and there’s nothing more horrible the boss of a comedy movie can do than play it safe. 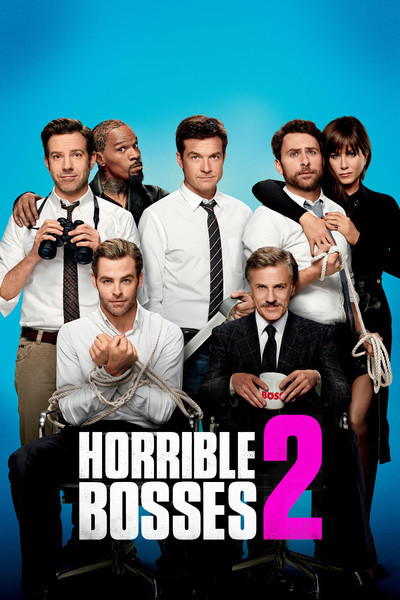 Rated R for strong crude sexual content and language throughout