Leigh Janiak’s SXSW Film Festival horror hit “Honeymoon” belongs to a long line of films about people who may not know enough about the recent object of their admiration. Great horror movies have been built around the concept of protector as betrayer as people like Rosemary’s husband worked with the devil to destroy her baby. You may have married the perfect guy but did you really know him? It’s a relatable core concept for genre filmmaking—the fear that arises from the suggestion that the person sleeping next to you is not what he or she purports to be. For the most part, these thrillers and horror films are built around the male aggressor: a husband or boyfriend with a lethal secret. Janiak’s “Honeymoon” cleverly turns the gender table, making the lovely bride the one with something to hide. I wish the film withheld more information from its audience to raise the overall tension but it’s a solid genre pic, made so primarily by two entirely committed performances from its talented leads.

Rose Leslie and Harry Treadaway play Bea and Paul, respectively. They’re beautiful, have great chemistry, and seem destined to have a lovely honeymoon in a remote cabin home. They can hike the woods, say hi to the locals and get the privacy newlyweds need to start their life together. Paul is kind, Bea is joyful—they’re bound to find happiness, right? It’s a movie called “Honeymoon,” what could go wrong?

The first sign of bad things to come pops up with eerie lights in the middle of the night. Then, our lovely couple has a “Body Snatchers”-esque encounter with a couple in town. Something doesn’t seem right in these eerie woods. Before you know it, Bea has gone sleepwalking, and come back a little, well, different. There are marks on her body that can’t be explained, and, most effectively of all, she doesn’t seem to be completely cognizant of Bea’s identity, or even normal human behavior. She doesn’t know how to make French toast. She can’t make coffee. Phrases are off and details of their history together seem fuzzy. And the lustful woman who came to the cabin has been replaced by someone who denies sex regularly. What the Hell is going on?

The film’s biggest flaw is that we know exactly what’s going on. The lights in the woods, the inconsistencies in human behavior—film history has taught us that Bea is not exactly who she used to be. I wish Janiak had let the relationship drama play out a bit longer. If “Honeymoon” had been a film in which we question Paul’s sanity as much as Bea’s personality change, it would have been even stronger. What if Bea wasn’t actually “different” but just a moody, inconsistent new bride? What if “Honeymoon” had kept more of its secrets until the final act?

Because Janiak didn’t make that decision, there are plot elements of “Honeymoon” that play out rather predictably. Having said that, it’s an enjoyable, well-made predictability. Janiak knows how to deal with the tonal shifts of the production and Leslie and Treadaway are both quite good here, appearing in basically every scene of a two-character, one-setting piece. In particular, Leslie has to go deliver on a lot of physically challenging moments and she’s excellent at conveying the reality of a terrifying situation. You can see the old Bea in the new Bea, which is the most terrifying aspect of “Honeymoon” overall. It’s not the massive changes that happen to our loved ones that scare us, but the slow realization that something’s just not quite right. At its best, “Honeymoon” transcends genre filmmaking to capture something to which we can all relate: that moment when you know something’s wrong in your relationship. 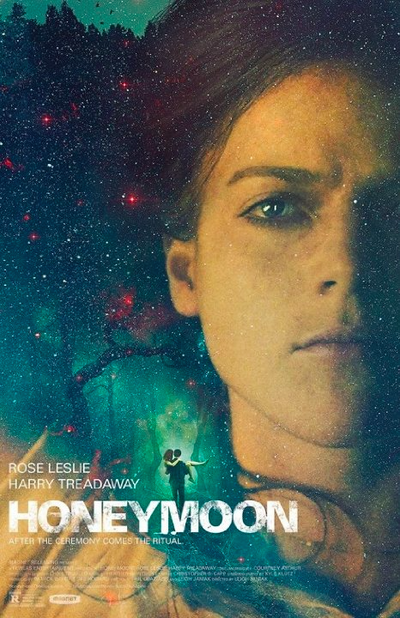 Ben Huber as Will