"Honey," a character study about a young woman that helps terminally ill clients commit suicide, is an equally fascinating and frustrating feature debut. Italian filmmaker Valeria Golino's adaptation of Mauro Covacich's novel "A nome tuo" ("In Your Name") is best when Golino teasingly speculates about her title character's actions. Golino gives us just enough information to speculate why Irene (aka: "Honey") why she needs to control everything about her patients' last moments, right down to the music they listen to as they die. But beyond that, we're free to think whatever we like about Irene (Jasmine Trinca).

Unfortunately, while Irene is a complex subject, our limited view of her is often frustrating. Her platonic relationship with Carlo (Carlo Cecchi), a suicidally depressed patient, only tells us so much. "Honey" is consequently only sometimes compelling. Its story is never as interesting as its conflicted heroine.

When we first meet Irene, she's rushing to a patient's bedside. She's nervous, but she doesn't show it once she's on her bike, on her way. From then on, Irene is Honey. You can see the difference between the woman and her persona in a later scene in which she rehearses the lies she's going to tell a pharmacist (she needs to euthanize her sick 14-year-old dog… he's very ill… she wants to attend to him personally…). Still, these opening scenes establish that Irene and Honey only appear to be different people when nobody's looking.

But Irene's smooth routine is immediately derailed when she learns that Carlo, an older patient, is not physically ill, but rather depressed. That revelation makes Irene desperate: helping Carlo kill himself violates her personal ethics. So, because she feels responsible for him, Irene bonds with Carlo, and tries to ease his pain in other ways.

Irene's relationship with Carlo is frustrating for a number of reasons, especially since she essentially makes his death wish all about her. Because he wants to die, she has him put her mind at ease. Their relationship is ostensibly deeper than that, but that's really what their connection boils down to: intimacy fostered by insecurity. Carlo's one more thing thing for Irene to worry about. He's made it harder for her to believe in what she's doing, and that intrusion forces Irene to take stock of her priorities. She becomes more careless in her affair with Stefano (Vinicio Marchioni), a married man, and that leads him to discover her double life. "Honey" is, in that sense, a drama about a control freak, albeit a very human one.

That's "Honey"'s main strength: Golino and her screenwriters acknowledge, but refuse to judge Irene's selfishness. Irene knows that imposing herself on Carlo is a fundamentally self-serving thing to do, even if it has mutually beneficial effects for him and her. But it's telling that the best scenes in "Honey" are the ones where Irene is losing herself. They're the moments where she allows herself to unclench, like when she rides her bike, or swims, or stares at the sun. Trinca's body language makes these beguiling scenes count. Irene's not just altruistic, nor is she selfish. Her anxieties often speak for, whether she means for them to or not. And that's refreshing.

Still, only knowing so much about the film's main protagonist often makes "Honey"'s dour tone feel oppressive. Because watching such a sympathetic character use the men in her life to chart her emotional distress is frustrating. Carlo, Stefano, and confidante/ex-lover Rocco (Libero De Rienzo) are essentially Irene's foils. That kind of dynamic is not necessarily bad. Male protagonists use women as their mirrors all the time. But that technique is only so useful in "Honey" since these man-shaped mirrors can only reveal so much. 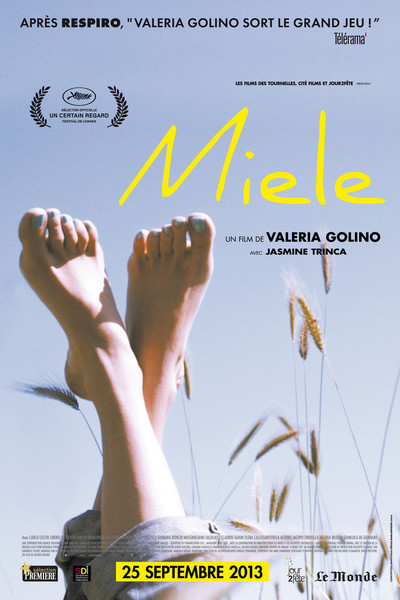