"Holidate" does not have a single authentic moment, appealing character, or genuine laugh. It's a would-be romantic comedy with neither romance nor comedy, an excruciating onslaught of unremittingly dull incidents slogging its way toward an utterly predictable conclusion. Just months ago, the year's best romantic comedy, "The Broken Hearts Gallery" reinvigorated the genre with an adorable heroine, great supporting cast, and a fresh and funny storyline. "Holidate" is a reminder of how easy it is to get every aspect of a romantic comedy wrong.

There's always room for a movie that takes a popular formula and subverts it. "Isn't it Romantic" and "They Came Together" are recent spoofs on rom-com tropes that made fun of the formulas on the way to a happily-ever-after ending. Then there are films that R-ify the usual PG-13 rom-com sweetness by raunching them up a bit. They may not be Great Art but they have something savvy to say about both the conventions and the appeal of the romantic comedy, which, let's face it, has been a crowd-pleaser going back to Shakespeare and probably before. "Holidate" tries to wink at the genre with complaints about how unrealistic romantic comedies are, but trust me, "Notting Hill" and "My Best Friend's Wedding" (both starring the aunt of this film's lead actress) are documentaries compared to this dud.

"Holidate" has nothing to say about anything. Basically, if Hallmark movies like "The Mistletoe Promise" and Netflix hits like "The Kissing Booth" are out in the world looking as beautiful as Dorian Gray, "Holidate" is the portrait hidden away in the attic getting more scrofulous by the minute.

The premise is in the title. Its only variation on the many, many movies about couples who pretend to be each other's dates for Christmas or a wedding or some other family gathering, is that this is about two people who for the flimsiest of reasons pretend to be each other's dates for a year's worth of "holidays," not just those where family will be together but also annual events that are more about drinking than celebrating, St. Patrick's Day and Cinco de Mayo. Just a few months ago, "Plus One" made this same idea work well.

"Holidate" gets off to a dismal start as our heroine, Sloane (Emma Roberts) arrives at her mother's home for Christmas mumbling, "f-ing Christmas" and stopping on the front stoop to stub her cigarette out on the head of a Santa figurine. Her mom's first comment: "Is this what you wear to Christmas dinner?" before launching into, "Why aren't you married?" and trying to fix her up. We also meet her unpleasant family, including a harried sister who is a mother of four feeling out of touch with herself and her husband, a bro-ish brother and his sweet girlfriend, and an aunt (Kristen Chenoweth who needs to fire her agent NOW). If your bad movie bingo card included a child pooping in the manger, the only intelligent comments about relationships coming from a creepily precocious child, and a slutty aunt with a mall Santa one-night-stand discovered in flagrante delicto, all supposed to be HILARIOUS, well, you're on your way to a win. If, on the other hand, you are hoping the movie will get less sour and more entertaining, you lose.

Every rom-com has to have a meet-cute, and here our twosome find each other in line to return Christmas gifts at the mall. The mall plays a very big part in this story. The guy is an Aussie golf pro named Jackson (Luke Bracey). He proposes the idea of being each other's no-sex, no-romance holiday buddies. The next holiday coming up, of course, is New Year's Eve, and after initially saying no, Sloane agrees. He assures her he is not attracted to her, so there will be no problem. And they tell everyone about the holidate agreement, thus undermining the whole thing, but nothing in this movie makes sense, so who cares. Every rom-com has to have an apology, preferably humiliating and in public, but my goodness, this one is long and rambling. "You're not funny," Sloane's mother (Frances Fisher) says at one point. Boy, she got that right.

Does your bad movie bingo card include Jackson rescuing Sloane from an embarrassing encounter with her ex? A character losing a finger in a 4th of July fireworks accident? A reference to a clay replica of female anatomy? A character having an embarrassing scatological event, leading to a clean-up followed by a first romantic interlude? If so, I am sorry for you, but not as sorry as I would be if you actually wasted your time watching this mess. 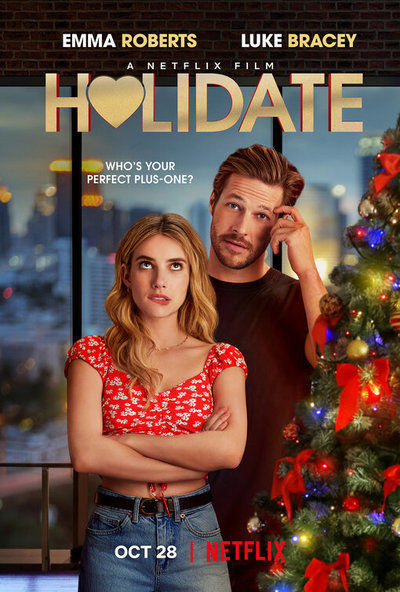