“Gee, I get a lonesome feeling/When I hear the church bells chime/ Those wedding bells are breaking up that old gang of mine.” That song was written 90 years ago, but it still captures the moment in your twenties when it seems like every weekend there is another wedding to go to and, unless your own is on the calendar, it can seem like running a gauntlet of questions from friends and relatives about your own relationship status and doubts about whether there is some secret conveyer belt of adulthood that you haven’t figured out how to get to.

The endearing romantic comedy “Plus One” begins with a collection of wedding toasts that appear to be real-life examples drawn from YouTube. The settings and speakers are varied, but the mood is the same. There are knowing but tender jokes about the bridal couple (“Many doubted that the words ‘Devry’ and ‘wedding’ would ever be used simultaneously”). And voices shake a little over the emotion of the moment, the infinitely moving celebration of two people pledging to build a life together and realigning all of their other relationships. As Hugh Grant says in a toast in another wedding-themed romantic comedy, “Four Weddings and a Funeral,” “I am, as ever, in bewildered awe of anyone who makes this kind of commitment.”

Ben (Jack Quaid) is rehearsing his best man toast, trying out his story of trying to stay up all night at a sleepover with the groom when they were kids. Ben is trying it out on his college friend Alice (Maya Erskine of “PEN15”). He says that the purpose of a best man toast is “one man’s heartfelt truth spoken publicly to another man who happens to be getting married and leaving me behind forever.” Like Owen Wilson and Rachel McAdams in yet another wedding-themed romantic comedy, “Wedding Crashers,” she tells him his speech is a huge mistake. “A wedding speech is just making people laugh,” she says. And since there is a girl from his past at the wedding he wants to impress, the one-who-got-away girl he almost got together with in college, he takes Alice’s advice.

The toast is a hit. But it is too late for the one who got away because she is now even farther away; she’s engaged. Ben is embarrassed and lonely. And Alice has just gone through a terrible break-up. Wedding season looms. And so they agree to be each other’s plus one for the rest of the season, ten in all.

Quaid comes by romantic comedy rhythms naturally. His parents are Meg Ryan and Dennis Quaid, and he has his father’s disarming smile. And his character knows romantic comedies, too. Ben explains to Alice the idea of the “meet cute” like when they both reach for the same cereal at the grocery store and fall in love instantly. But we know and they will find out that love is messy and risky and that attraction is instant, but love takes time.

Writers/directors Jeff Chan and Andrew Rhymer, also from “PEN15,” make a couple of smart choices here. First, even though a single celled organism knows where this is all going, the developments primarily come from character, not the situations around them. Alice and Ben may think they want to be in love, but the screenplay and the performances show us that both are so defensive it will only happen if it sneaks up on them through friendship (as in “When Harry Met Sally…,” the legendary romantic comedy starring Quaid’s mother).

Ben and Alice have no problem talking to each other about topics older people might find TMI, like boners and bikini waxes and peeing in the shower, plus the appropriate use of “boom shaka laka.” They have a natural understanding, whether they are making fun of the groomsmen's poses for pictures or checking into a posh Hawaii resort for a destination wedding. But that does not mean that they are any good at talking about or even understanding their own feelings.

And second, the weddings themselves are a hoot, shrewdly observed, witty, but genuine. Chan and Rhymer understand the essential weirdness of being an observer of someone else’s emotional, life-changing event that happens to also be a big party. There are always guests who would otherwise not be at the same occasion and may never see each other again and family members who want to judge you or are worried you’re judging them and guests with a complicated history who would otherwise not be in the same room.

They also understand weddings’ many telling details and challenging decisions. Do you bring the gift to the ceremony? Is the plus one included in the family photo? Is there something to say to a guest you’ve never seen before other than, “How do you know Jason and Sarah?” A member of the bridal party may want to (a) sing a song about his own breakup or (b) discuss the bride’s pregnancy in a toast. And what about those wedding guests who are getting high in the parking lot or jumping in the pool with their clothes on? The list of credits includes characters described as “passive aggressive maid of honor,” “unprepared best man,” and “hapless father.”

The wedding marathon gets closer to home as Ben and Alice each has a family member getting married. Acknowledging their feelings for one another means understanding that, like life, the craziness and drama and romance of weddings is actually pretty wonderful, especially if there’s someone with you who appreciates all of it. 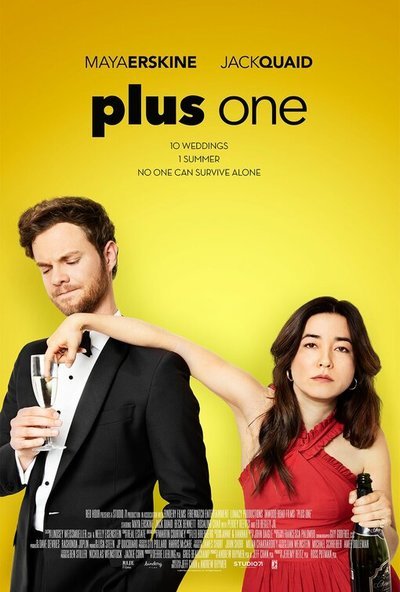