It brings me no joy to say that Jeremy Saulnier’s newest, and arguably his most ambitious, film is his first misfire. As one of the biggest fans out there of “Blue Ruin” and “Green Room”—two masterfully taut thrillers—“Hold the Dark,” which premiered last night at TIFF and drops on Netflix on September 28th, was one of my most anticipated films of the entire year. Saulnier is too much of a craftsman to make a complete disaster and there are a number of ideas and scenes in “Hold the Dark” that display that talent, but the piece never comes together like you want it to, always feeling like it’s just out of reach as a commentary, thriller, or even escapism. In the end, it’s a brutal slog of a film, admirable in its fearlessness in terms of dark subject matter, but the brutality doesn’t feel worth it in the end.

Adapting a book of the same name by William Giraldi, regular Saulnier collaborator Macon Blair (also the star of “Blue Ruin”) transports viewers to the bleak, snow-covered landscape of Alaska. From the beginning, the setting of “Hold the Dark” is unforgiving, terrifying. You get the impression that people were never meant to settle here, and not only because there have been an increasing number of incidents in which wolves absconded with local children. The use of space and setting is actually the best quality of “Hold the Dark.” Saulnier and Blair make Alaska feel like a place where any number of things can kill you—cold, wolves, or even the insanity brought on by too little sunlight.

The always-great Riley Keough plays a resident named Medora Sloane, whose son disappears one day, presumably taken by wolves. She calls in an expert on the animal in an effort to try and get her son back named Russell Core (Jeffrey Wright), but the quiet, intellectual man is quickly overcome by the violence of the area, a violence intensified when Medora’s husband Vernon (Alexander Skarsgard) returns from military service overseas. Vernon is the brawn to Russell’s brain, and his arrival seems to unleash something inhuman in the area. “Hold the Dark” occasionally explodes into stunning violence, particularly an extended shoot-out sequence with local police, including one well-played by James Badge Dale, also the star of an excellent TIFF Midnight Madness film, “The Standoff at Sparrow Creek.”

Clearly, all the ingredients are there. And yet Saulnier endeavors to mimic the cold, desolate setting of his story in the filmmaking, resulting in a humorless, bleak, unforgiving movie. Of course, some stories are served by punishing their audience, but the tone becomes numbing here when it needs to be engaging. Only Dale gives a performance with any sort of energy with Wright, Keough, and Skarsgard looking almost like the walking dead at times, moving through the inevitable brutality of the plot in a way that’s designed to make “Hold the Dark” more mysterious and intense but actually serves the opposite purpose. It’s too easy to check out of the narrative of Saulnier’s film, which has never been true of his work before. In “Blue Ruin” and “Green Room,” Saulnier grabbed his viewer and refused to let them go. It’s ambitious of him to try something that arguably demands more of its viewer, but we have to feel like we’re getting something back for our effort.

This review was filed from the Toronto International Film Festival on September 13th, 2018. 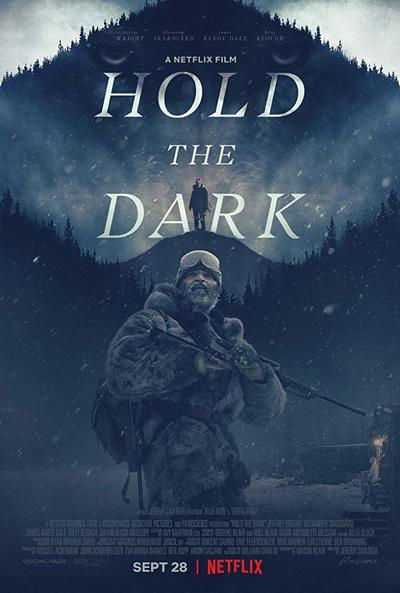