There's rarely a way to compliment a director for trying without it seeming both condescending and like foreshadowing a lengthy exegesis of their film's failure. But it is important to note that Imtiaz Ali is not some run-of-the-mill hack, and that when he goes awry, it's from having tried something interesting that didn't work, rather than trotting out shopworn banalities. There's a lot to like in Ali's latest, "Highway," which is a gorgeously assembled, ambitious piece of work, although it doesn't coalesce into a holistically successful film.

It opens with Veera (Alia Bhatt), convincing her fiancé to take her for a drive to escape their all-consuming wedding preparations. The fiancé, under duress, complies, and per his fears about straying too far from the house at night, when they stop at a gas station, Veera is abducted by masked bandits making an escape. When her abductors find out who she is—the daughter of an extremely rich and influential man—the leader of the group panics and Mahabir (Randeep Hooda), Veera's initial abductor, takes her and sets out on his own to ransom her, seething with anger at the ruling classes. And yet, from this decidedly unpromising starting point, romance first buds and then flowers between Veera and Mahabir.

It's to Ali's credit that he controls the tone and pace to such a degree that the romance feels organic, rather than a screenwriter's contrivance. Veera finds, in fairly short order, that being held hostage by a band of quasi-radical bandits is actually less constricting than upper-class bourgeois life. Her ease with the bandits throws them all for a bit of a loop, and gradually chips away at Mahabir's monolithic, humorless exterior and before he knows it, he's taken with her incongruous pleasantness, and he begins to see her as a young woman rather than a symbol of the hated plutocracy.

Once Veera and Mahabir are in love, the film suddenly finds itself without apparent options, and its metaphorical highway becomes something of a dirt road through the woods on a foggy evening. The ultimate resolution becomes fairly inevitable at a certain point, however much one might wish it to not happen. The last few minutes of "Highway" are very awkward, especially in contrast to the lyrical sweep of the previous hour and a half or so, and lead to an extremely muddled final image, which suffers in contrast to the clarity of the rest of the piece. And so it ends, and too bad.

To leave off on a higher note than the film itself does, "Highway" has a number of virtues. Anil Mehta's cinematography is absolutely gorgeous, with some sublime panoramic shots once Veera and Mahabir get to Himachal Pradesh in northern India. And, as for Veera and Mahabir, Alia Bhatt and Randeep Hooda give passionate if slightly raw (especially in Bhatt's case) performances. Their chemistry is terrific, even if the continuity from scene to scene flags a bit in places. When they're at their best, though, the two leads are a delight to watch, and Bhatt in particular should have a long career ahead of her if she continues to get good parts in interesting films.

For, whatever else can be said about it in terms of it working or not working, "Highway" is a kind of film there should be more of: an impeccable display of craft, with both a brain and heart, that tries something new. Its peaks are wonderful; the one among which not yet mentioned being "Pataka Gudhi," the song immediately post-interval, the proverbial "good A.R. Rahman song," which textually coincides perfectly with Veera's first realization of her complete freedom from her stultifying home life. If not for the film's tendency to drift off into the ether to the complete loss of all its momentum and purpose, and for the horribly awkward conclusion, "Highway" might be a very good movie indeed. Instead, it's an inconsistent, if intermittently splendorous, work. There are, to be perfectly clear, far worse things in life. 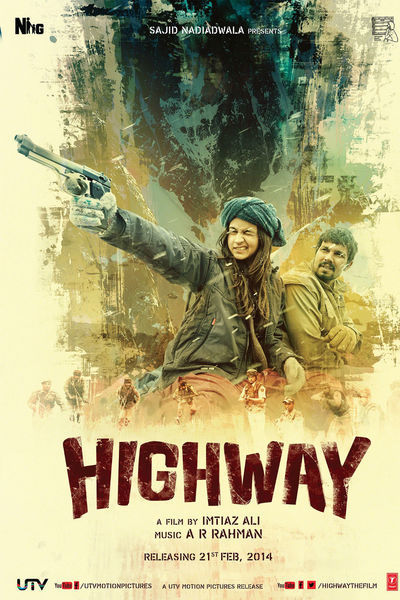