Daniel Patrick Carbone's stellar debut "Hide Your Smiling Faces" has drawn deserved comparisons to David Gordon Green's "George Washington" and Terrence Malick's "The Tree of Life" in its capturing of the formative moments in which boys transition to men. While comparisons to masterful filmmakers often betray a critical inability to look deeper, the influences feel relevant here. Like Green's debut, this lyrical drama announces the arrival of a talented young director with a keen grasp of youth; a man who presents a truthful vision of how death impacts soon-to-be men differently depending on their ages.

"Hide Your Smiling Faces" opens with a long shot of a snake eating an animal. It is a tone-setter in that what follows has the feel of natural progression; that of a teen into a man.

Two boys, who we will learn are brothers, take shelter in the rain, with the younger boy following the lead of his elder as they spar, play and do what adolescents do. The taller one lifts the shorter one. They laugh. They play spontaneously as if there is little concern for what tomorrow will bring. The first act is filled with these moments of adolescence—boys wrestling in a field, finding a dead bird in an abandoned house, and one emerging from his home with his father's gun, a moment that will force parents to recoil at the potential danger but isn't played as foreboding or melodramatic. Later, when that same child is found at the base of a bridge, having fallen from above, we are left to wonder if it's related to the incident with the gun but it's the fact that death has entered this innocent world more than the how or why that interests Carbone as a storyteller.

Older brother Eric (Nathan Varnson) is shattered by seeing the dead body of his brother's friend. Immediately, there is a stronger distinction between the boy's reactions. Eric sits on the couch, holding his mother's hand in grief while Tommy (Ryan Jones) traces the pattern on the floor rug. And yet both still share a smile and an uncomfortable laugh. They're still boys, now forced to deal with something unexplainable and unimaginable. Adults toss platitudes like "life's just tough" but don't really know how to comfort Eric or Tommy and the differences in ages—Tommy appears of middle school age while Eric is most definitely high school—begin to impact how they process grief. Eric seems more reckless, more violent, while Tommy regresses in the other direction, becoming more cautious. There's a fantastic scene in which Eric drops Tommy in the water, knowing that he'll be safe but the latter has a degree of panic that feels heightened by recent developments. Carbone's narrative also gains resonance when Eric becomes concerned that a friend may be suicidal. These are boys thinking about, talking about, and experiencing the inevitability of the end of life and that it may come sooner than nature intends for the first time, and realizing that it is everywhere.

Carbone's approach to filmmaking works with dialogue and interaction that feels natural, improvised, and unforced, much like the playful days of the mid-section of Malick's film. There's a sense that these lazy days must end but Carbone's film is neither foreboding nor nostalgic in the way it underlines those themes. Finding the dead bird could be seen as a sign that everything that flies must die but Carbone constantly maintains distance from the emotion, shooting his boys naturally instead of forcing a cautionary tale of the dangers which so many adolescents survive. His aural choices are similarly unmannered, often allowing sounds of nature like wind rustling through the trees and birds chirping in the distance to suffice where other directors would have piled on a sentimental score.

What elevates "Hide Your Smiling Faces" is Carbone's gentle, lyrical touch where other filmmakers would have turned the same thematic concerns into melodrama. Nothing in "Hide Your Smiling Faces" feels overly underlined or forced in a way that would betray the truth of the characters in favor of the narrative. Carbone knows that kids can see the day they wrestled with other kids or hid from the rain as being as formative as the day that one of them brought dad's gun to play time. And it is only when we cross over from adolescence to adulthood that we can look back on all of those days and truly realize what they meant. 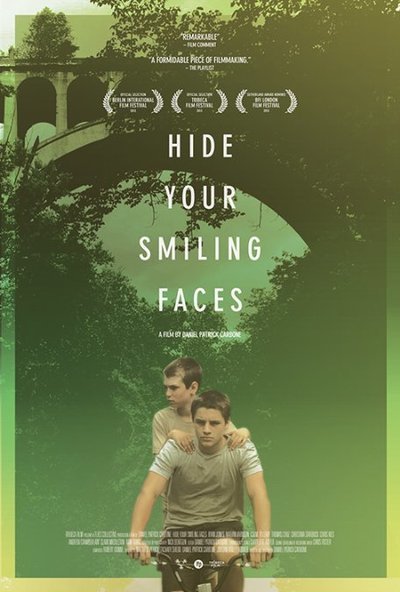