In Greek mythology, Heracles was the product of Zeus getting his Mt. Olympus freak on with a mortal woman. Heracles was named to honor his philandering daddy’s angry wife, Hera, but her vengeance had dire consequences for the future hero. Hera drove him insane, at which point Heracles murdered his wife and children. After regaining his sanity and realizing the horrible nature of his crime, Heracles accepts as penance the famous labors most of us know about from high school English class. These included defeating the Nemean Lion, the hydra and the Erymanthian boar.

This was the legend I expected from Brett Ratner’s “Hercules.” Instead, I and the 12 other people who showed up for last night’s screening were treated to yet another comic book adaptation by studios desperate to hang on to its stereotypical core market of men in states of arrested development. I know nothing about the Radical Comics series upon which this is based, but I sincerely hope it is not the half-assed, warmed over “300” rip-off its cinematic counterpart is. Watching “Hercules,” you can feel your intelligence being insulted in almost every frame.

Shorn of the graphic violence and blatant homoeroticism that made “300” gore-soaked camp, the PG-13 rated “Hercules” is left with poorly rendered CGI battles and a fear of any semblance of darkness. There’s also the potentially interesting idea of how one man’s legend can shape the minds and actions of many, but “Hercules” is afraid of that too. For all its violence, “Hercules” coddles you, protecting you from any kind of complex or sad emotion the material might inspire. It’s so afraid of upsetting you that it can’t even give its most interesting character the noble death it so beautifully sets up for him. Even the character is pissed off about this.

Ratner dispatches with the labors in the pre-credits sequence of the film, turning them into a story told by Hercules’ nephew Iolaus (Reece Ritchie). Iolaus is being held hostage by a band of pirates who suspend him over a long, jagged spear of rock aimed at his nether regions. “Hercules” posits that the legends of its titular hero have the power of scaring men into submission, but these pirates temporarily prove the exception. “That’s bulls—t,” one of the pirates exclaims after hearing of the Nemean lion.

Of course, Hercules (Dwayne Johnson) makes his entrance wrapped in the lion’s hide. Ratner shoots this as if Johnson were on the runway of a fashion show at Ernest Hemingway’s house. Clad in fur and covered in smoke, Hercules announces his new role as mercenary for anyone willing to pay his price. He is joined by a crew of people including Amphiaraus the Oracle (Ian McShane) and an Amazonian archer (Ingrid Bolsø Berdal) who should have “Katniss Everdeen” tattooed across her beautiful forehead.

After dispatching the pirates and saving his nephew from a stalagmite-like enema, Hercules’ next job for hire is at the behest of Lord Cotys (John Hurt, putting a much hammier spin on his "Snowpiercer" character). Cotys wants to stop the terrible reign of Rhesus (Tobias Santelmann), a leader who supposedly possesses otherworldly powers of persuasion and an animal-like appearance that, in a case of missed opportunity, is not that of a monkey. Hercules complains that Cotys’ army is far too untalented to face Rhesus, but a payment worth twice Hercules’ weight in gold changes Hercules’ mind. Cue numerous scenes of The Rock as Hercules as General Patton, speechifying and pacing before leading his hapless motley  crew of an army into war.

Mythological heroes have undergone numerous changes throughout history, so there’s barely a shred of justification in complaining about how far away a story strays from its most well-known incarnation. However, I must grasp that shred to illustrate my point about how depressingly infantile “Hercules” is. Out of nowhere, Ratner and his editors suddenly insert bloody images of children and women being murdered. This flashback is so poorly edited that it’s never clear what’s happening, though it ends with a direct rip-off of Kubrick’s "The Shining."

Since “Hercules” had strayed so far from the legend, I was surprised the film would include Hera’s horrific revenge on Hercules’ family. These images torture Hercules whenever they appear, threatening to give the character some complexity. To Johnson’s credit, he attempts to play these moments in agonized fashion—he believes he has murdered his family. It’s all for naught: Screenwriters Ryan Condal and Evan Spiliotopoulos work out an absurd loophole of absolution, pinning the murders on a three-headed dog instead of Hercules. The three-headed dog also turns out to be a hallucination; it’s actually three separate dogs. Responding to this development, the guy behind me at the theater let out a fierce snore. I envied him.

Like Arnold Schwarzenegger before him, Dwayne Johnson was born to play Hercules. Like Ah-nuld, he’s muscular and not without an onscreen chemistry that’s at times perfectly mythological. And Johnson is a welcome change from the Nordic ideal mythical movies usually employ. It’s too bad that Hercules comes off as a supporting character in his own story. The armies do most of the fighting, and when there’s quiet, Johnson has to share the screen with his team. The movie is stolen by McShane’s oracle, who is the recipient of the aforementioned noble near-death scene, and Tydeus (Aksel Hennie), a warrior so scarred by violence that he is more animal than human. Tydeus’ backstory, which “Hercules” only hints at, is far more interesting than anything we’re following in the present.

The CGI is absolute garbage, and Dante Spinotti’s cinematography is depicted as a muddy mess through the 3D glasses. Yet, there’s one moment that not only proves how little the filmmakers gave a damn but also saves this film from the no-star review it truly deserves. One of the villains is hit by the gigantic head of a statue of Hera that crumbles when Hercules pulls it down. The camera gives us a great look at the impact which, had physics been consulted, would have resulted in a juicy, delicious splatter. Instead, the villain not only remains intact after impact, he also rides the head off a cliff into oblivion. I laughed so hard I woke up the guy behind me. He was not happy. 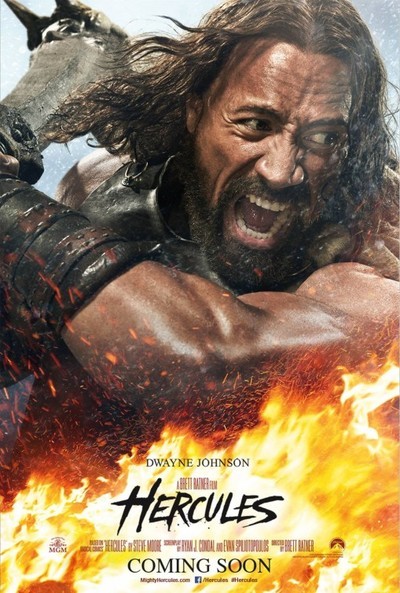