Helmut Newton: The Bad and the Beautiful

Obituaries and appreciations of the photographer Helmut Newton after his death on January 23, 2004, are riddled with the monikers Newton collected during an increasingly controversial career. In the New York Times, Newton was described as the “35mm Marquis de Sade”; in The Guardian, an “enfant terrible”; and in Vogue magazine, for which Newton shot for decades, the “King of Kink.” Yet none of those nicknames come quite close to capturing the sly luridness and bold subversion of Newton’s images, which transformed fashion photography while simultaneously raising questions about aesthetics and exploitation.

The documentary “Helmut Newton: The Bad and the Beautiful,” released in what would have been Newton’s centennial birthday year, only briefly dares to question the methodologies of the man who recoiled at the words “good taste.” Instead, “The Bad and the Beautiful” is less about Newton himself and more about how his work made the women he photographed feel. That interview-heavy structure gives voice to the models whom we recognize from Newton’s photos—Grace Jones, in that iconic nude Playboy shoot with then-boyfriend Dolph Lundgren; Isabella Rossellini, her face gripped by former flame David Lynch. For as incomplete as “The Bad and the Beautiful” feels in terms of addressing criticisms leveled at Newton, the inclusion of so many women’s perspectives is its own defensive statement.

To see just one of Newton’s pictures is to understand how deeply his photography, which gained popularity in the 1950s and then exploded into the mainstream through partnerships with Vogue, Yves Saint Laurent, and Chanel in the 1960s through the 1990s, has reverberated through fashion, art, and film, from the bad (Terry Richardson is clearly a devotee) to the good (Tom Ford’s film “Nocturnal Animals” owes a debt to Newton’s preference for gorgeous, distant women). Director Gero von Boehm shows us numerous contact sheets of images that demonstrate Newton’s style. The women in his photographs were nearly universally nude or seminude, tall, thin, full-breasted, similarly shaved. If dressed, they were often outfitted in fetish wear, like pleather corsets, lace lingerie, or thigh-high stockings or boots. Certain series depicted individual or groups of women clad in gorgeous, high-end fashion in one shot, and then in the exact same positions—but now fully naked—in another. If looking into the camera, the women’s expressions were always challenging and declarative, as if they were almost daring the viewer to gaze upon them and deal with whatever feelings (shame, lust, embarrassment, jealousy) were churned up as a result.

But that idea of feminine control wasn’t universal within Newton’s work, or least, not in a straightforward way. Also in his portfolio are disquieting compositions that suggest abuse and violence. A woman made up like a Barbie doll, her limbs splayed out on a hotel bed, her slip riding up. A woman wearing nothing but a pair of designer high heels, laying on a beach, her upper half ensconced in and hidden by black plastic trash bags. The nude bottom half of a woman’s body sticking out the open mouth of a gigantic alligator. To Rossellini, Jones, model Nadja Auermann, actress Hanna Schygulla, and other interviewees, Newton’s camera held up a mirror up to our misogynist society and reflected it back to us in unexpectedly beautiful, uncompromisingly garish ways. “‘I like you! Damn you!’” is how Rossellini describes what she thinks Newton was channeling with his “machismo” point of view, which manifested in an appreciation for the beauty and strength of womanhood (“I like you!”) with a contrasting desire to see it torn down (“Damn you!”). Similarly praiseful is Jones, who Newton once photographed for a magazine cover nude, wearing only chains around her ankles, an image that inspired threats against the publication. Jones literally shrugs while saying, “Sexism and racism, I never felt that at all,” before breaking out into a delightfully wide grin and offering as a comparative, “I’ve tied up guys before. White guys. Big white guys!”

These interviews are the best elements of “The Bad and the Beautiful,” and they dominate the first half of the film. Von Boehm rejects a typical biographical structure, choosing to focus on those thematic similarities in Newton’s work, as described by his collaborators, rather than relying on linearity. More than halfway through the documentary, long after we’ve seen dozens of the nude photographs that made Newton so famous and once we’ve gotten a little annoyed at how often The Cure’s “Pictures of You” is used as a transitional track between scenes, is when von Boehm tackles the photographer’s childhood in what would become Nazi Germany and mentions his early adult years in Singapore and later Australia. Seemingly important details about his health or his marriage are given scant attention; a pattern of heart attacks, or an open relationship with his wife June Newton, are brought up in passing toward the end of the film. Some of this unevenness is because the compiled footage of Newton included in “The Bad and the Beautiful” is sparse—pulled from behind-the-scenes recordings from various photo shoots, or the opening of a photo exhibit with his wife June in Cologne, Germany, in 2000, or Newton’s return to a park in Berlin, Germany, where he used to play as a child. But through specific exclusions, von Boehm seems to be making a certain point: that the personal details of Newton’s life weren’t that interesting. That to know Newton was to know his work, and to know his work, you need to know the women who helped craft it.

Is that an unfulfilling argument? Yes, because “The Bad and the Beautiful,” even if it is doing so intentionally, doesn’t satisfyingly grasp or communicate what in particular about the female form so beguiled Newton. Without that clarity—without a sense of motivation past defiance—there is a bit of a vacuum in the middle. There is some talk of how Newton might have been influenced by Leni Riefenstahl’s work in elevating physical form, but as a Jewish man, he bristles at the idea that Nazi propaganda shaped his aesthetic. We see inside Newton’s Monte Carlo apartment, decorated throughout with numerous Barbies, fetish objects, and pop art, but the only explanation Newton has for the appeal of dolls is a sexist one: “These girls don’t speak, don’t complain, that’s the beauty.” Former supermodel Claudia Schiffer and longtime Vogue editor-in-chief Anna Wintour speak about their own complicated experiences while working with Newton, but they call his work defiant and subversive, not potentially damaging. The only voice included who dares to criticize Newton is American writer and activist Susan Sontag, who during a shared appearance on a French television show counters Newton’s “I love women” with “A lot of misogynous men say that. I am not impressed.”

Perhaps Cindy Crawford, shown here shivering in a swimming pool while Newton barks commands over and over at her, would have said something similar, or even mildly critical. But “The Bad and the Beautiful” doesn’t make space for any viewpoints other than complimentary ones. As an opportunity for the women who were voiceless in Newton’s photographs to finally speak, “The Bad and the Beautiful” is enlightening and provocative. Yet while it raises questions about individualized female empowerment as it is tied to fashion and capitalism, it then fails to adequately answer them. 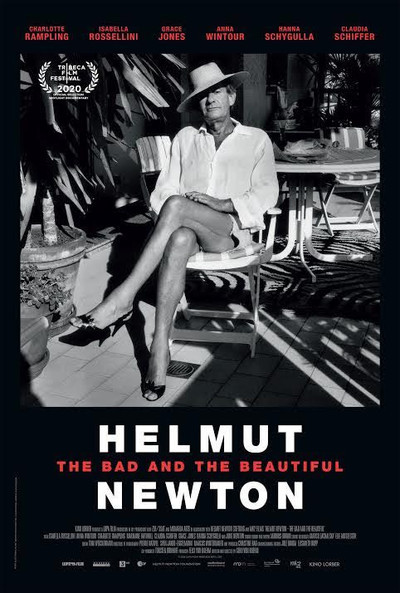 Helmut Newton: The Bad and the Beautiful (2020)