“Hell Fest” is a pretty bad movie that makes a great case for more slashing at horror theme parks. The lighting is already menacing, no one will believe your prey as you stalk them, the rent-a-cop authority figures are inherently apathetic, and the jump scares are free. It’s the closest you can subject people to a horror potluck without being "The Cabin in the Woods." So why can’t the six writers of this story have more fun with this premise?

It starts with the movie's fresh meat, which is represented by six pretty college-age students who giddily treat this like a night at Evil Disney. But after a slightly strange credit-sequence nightmare, there’s more focus from the script on their relationships than their personalities, give or take some haircuts. The writers bide time with 20 minutes of backstory that won’t mean anything once we get to slashin’, aside from knowing who is coupled with who. The woman who is given the most dialogue, Natalie (Amy Forsyth) is the main target, trying to work through a bashful crush on a walking blood bag named Gavin (Roby Attal) while hanging out with all of their friends at a park called Hell Fest.

And then, a true menace buys a ticket to Hell Fest—our lame-duck slasher who fails to be frightening by constantly walking in slow motion and clenching his fist like the “Arthur” internet meme. Wearing a mask that was probably once labeled “Definitely Not Leatherface,” he is less a disturbing agent of chaos and more a tedious screen presence who toys with a horror park’s already hazy idea of personal space. But he does give the movie its personality, which is that of barely menacing, and always dragging its heels to get on with the simple pleasures.

Known as “The Other,” the masked presence stalks Natalie, freaking her out while her friends don’t believe her. Time and time again, the movie reminds us of how a horror theme park is a great place to make frightened people cry wolf. And yet we’re merely rewarded with sludgy scenes of terror with people learning what's real and what's not before meeting their demise.

As for Hell Fest, the place? It's the kind of fear factory that's so dangerous there aren't even emergency exit signs. There are a lot of labored sets with spiders, corpses, and hundreds of performers that that pop out on our protagonists. Someone in production thought that a train almost running you over was worth being its own room, and it’s those types of left-field ideas that can’t save “Hell Fest” as it’s more sobering than intoxicating. Watching a horror movie inside a horror park should feel like being through the looking glass, but aside from topsy-turvy canted angles and constantly expressive lighting, “Hell Fest” lacks deadly pizazz, even when Tony Todd is revealed to be its ghoulish host.

A major defect: the constant fake jump scares brought on the characters only soften any initial nerves. And then the idea of playing with what horror is real or fake at the park doesn’t lead to much—when people see that someone getting stabbed in front of them is actually dead, it’s more awkward for us than it is mortifying for them. That we so often know what's real or fake sucks out the warped nature of setting a movie inside a medley of horror tropes.

The scares of “Hell Fest” never leave a mark, and it’s gore-lite in a weird way that makes it seem like a self-serious light-R that forgot to have fun (the relatively tame language and selective gore makes one think it used to have PG-13 aspirations). But the concept has so much potential, it's a bummer it plays out so mechanically. So while a sequel is left open, like many mid-size horror films, "Hell Fest" will need to spruce itself up significantly to make it a horror property worth another go-around. 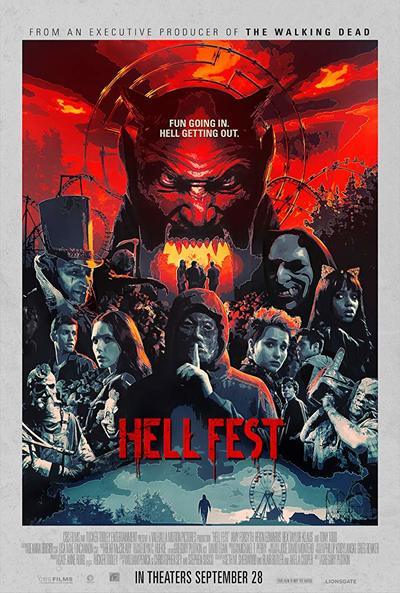 Rated R for horror violence, and language including some sexual references.