The Tinseltown tale of Harold & Lillian is surely one that’s worthy of a documentary, though not in the way you might expect. It's not about famous actors or directors, but the influence of two people who work behind the scenes in pre-production. And most of all it is a pure story about love, without the scandals. Theirs is a saga fit for the film history footnotes and never the tabloids: he was a storyboard artist, she was a researcher. “Harold and Lillian: A Hollywood Love Story” is a heartfelt tribute to their hard work, their marriage and their creativity, as if proof that good people and good ideas can come from a business of fantasy that is rarely shown with such sincere warmth.

Coming from a career of drawing, Harold started doing storyboard work, where he was able to draw with different camera lenses in mind. One of his first major projects was “The Ten Commandments,” of which he never saw director Cecil B. DeMille but did see his sketches on the big screen, as he claims in interviews shown here. That led him to projects like “Ben-Hur” (“I almost forgot how to draw a guy with a tie,” he hilariously asides) and “The Birds,” where Harold collaborated directly with Hitchcock in the editing room. During many of these references, Raim’s film displays the storyboards along with a particular project he worked on, and Michelson’s influence becomes ever apparent.

His wife, Lillian Michelson, started working in research after starting a family with Harold; there’s a bewildered look on her face when she talks about once getting fired for being pregnant before she worked in Hollywood. She became an essential element for creative visions, and she expresses how she loves the idea of finding facts in order for Hollywood to create fantasy. Over time, she amassed her own library of materials, and when Francis Ford Coppola started his own Zoetrope Studios, it was her library that he put on the lot.

The context of this documentary is always that they’re regular, nice people in a tough business, and the doc’s tone is one of grounded enthusiasm, like, “Have you met my friends, Harold & Lillian?” Likable they are indeed, and they’re funny, too. I laughed out loud when Lillian mused about Tom Waits hanging around her library (“Everything that came out of him sounded like a police confession”) or the time she was going to meet with a true South American drug dealer for “Scarface” research (“He was a nice Jewish boy”). The film humanizes people behind the scenes in ways we rarely get to see.

As the two are framed as “secret weapons” of the industry, there’s a vigilance to the documentary about restoring the credit they haven’t received for various films, literally in the credits themselves (Lillian especially, whose IMDb profile is sparse, for example). Going one step further, “Harold & Lillian: A Hollywood Love Story” makes the compelling case about the creative significance about people like storyboard artists and researchers influencing the “vision” of a film, challenging the finite notion of authorship. The movie even contains a mini-bombshell when Harold talks about working on “The Graduate,” and claims the iconic shot of Dustin Hoffman framed under Anne Bancroft’s legs to be from his storyboard. Whether wholly true or not, it makes you wonder just much of Harold and Lillian have influenced Hollywood’s best films.

With a relationship, a family and two careers to justify, the documentary seems to cover its massive territory even though it does so by sometimes being discombobulated or flat. “Harold and Lillian” even starts out with a lack of promise as it establishes that it will more or less be talking heads recalling previous events, but soon gains charisma with who speaks on camera (Mel Brooks, Danny Devito, Francis Ford Coppola, along with legendary storyboard artists) and the many fascinating tales Harold and Lillian offer. The documentary offers a sweet cinematic touch when it visualizes certain passages in their relationship with storyboard animation, and every now and then shows us the crafty, hilarious cards that Harold made for Lillian on various occasions. The spiritual guide for Raim’s collection of their lives proves to be Pixar’s “Up,” given Lillian’s memory book that bookends the story, and music that echoes Michael Giacchino’s score for that film.

As the documentary celebrates hard working people, Raim’s affection and awe for Harold and Lillian prove to be contagious. It becomes the special kind of history project that can expand your film knowledge as much as it might warm your heart. 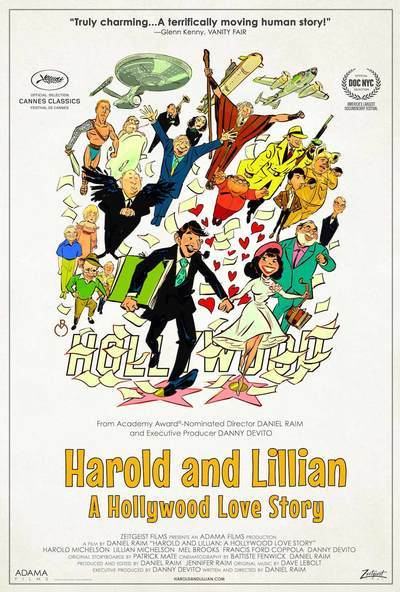 Danny DeVito as Himself

Mel Brooks as Himself

Lillian Michelson as Herself

Harold Michelson as Himself

Gene Allen as Himself

James D. Bissell as Himself

Rick Carter as Himself

Gabriel Hardman as Himself

Bill Krohn as Himself