Expectations can be a burden, and “Happy New Year” is heavy laden: director Farah Khan and leading man Shahrukh Khan (no relation) have made two prior features, 2004's “Main Hoon Na” and 2007's “Om Shanti Om,” that fall anywhere between “a lot of fun” and “all-time classic” depending on whom one asks, and there are plenty of people one can ask, as both films were enormously popular. Not to mention, Farah's choreography kept Shahrukh from falling off the top of a train in “Dil Se.” For Western audiences unfamiliar with these titles, suffice to say, this director-star duo's reunion is A Very Big Deal. And, as if that wasn't enough, they've been developing, to some degree or other, “Happy New Year” for almost a decade.

While a compelling argument that expecting another “Om Shanti Om” or a work of similarly awe-inspiring scale is setting the bar unfairly high, even resetting all factors to neutral, “Happy New Year” would be a mysteriously sloppy piece of work. Its premise is a tantalizing one given the director's immense skill as a choreographer and visual stylist and deft hand with comedy. The son of a convicted thief assembles a team to exact revenge against the sinister tycoon who framed the father by stealing a set of invaluable diamonds, which requires that the avengers enter a dance competition. The execution of that premise is extremely erratic; there are few movies in living memory that ricochet between shockingly offensive comic business and utterly disarming hilarity as drastically as this one.

It's that mercurial aspect to the comedy that causes hesitation before branding it outright as homophobic or racist. There are mean-spirited straight male gay panic gags side by side with awkward  but clearly affectionate normalizing of gay desire. There are truly shocking moments of racism toward East Asians (including a “they all look alike” joke that, although scorned by another character on-screen, is still a “they all look alike” joke in 2014), side by side with a whole subplot about Shahrukh showing how progressive he is by being nice to a North Korean kid.

Almost the entire first half of the movie, until the intermission, is a bit of a disaster. The second half, featuring more dancing and the fruition of the heist plot, is a good deal more fun. The heist sequences are tensely staged, goofily over-the-top convolution in the spirit of “Ocean's Eleven” or Shahrukh Khan's own “Don” remake and sequel, defying logic and even rational linearity at every turn, and quite fun. But it's the dance sequences, featuring cortex-melting costume design and Farah Khan choreography—it's not her best work, but even a slightly off-her-game Farah Khan towers over mere mortals—go a long way toward making the whole enterprise worthwhile.

That the sum total of the enterprise is “a bunch of movie stars goofing off and dancing a bit” shouldn't serve entirely as a dismissal. Abshishek Bachchan is a surprising standout in a dual role as the villain's layabout son—complete with blue contact lenses and a hilariously on-point American accent—and the out-of-control drunk the good guys recruit because he's a dead ringer. Often a fatally stiff actor and atrocious dancer, Bachchan seems like someone opened his physical comedy valve here, giving his loosest, funniest performance in years, if not ever. And as for his dancing, well, the whole point is that the heroes are bad dancers here. Deepika Padukone's role as the professional brought in to whip them into shape is lamentably small and undemanding; hiring a star of her caliber for a role this undemanding is overkill. But that's one of “Happy New Year”'s principal reasons for being: everyone in the movie is a star.

This is not, to put it mildly, Shahrukh Khan operating at the peak of his powers. That Padukone quotes one of his better moments (a motivational speech he delivered to the girl's field hockey team he coached in “Chak De! India”) with the genders flipped, before cutting to an annoyed reaction shot from SRK, says a lot about the movie as a whole. That and other callbacks to his previous glories merely highlight the degree to which he's on autopilot for much of the film here. But, as with the director, even sub-peak SRK is better than most. Where this differs is that there are a bunch of other movie stars visibly trying a lot harder right there in the same scenes with him.

If “Happy New Year” inspires anyone to check out “Main Hoon Na” or “Om Shanti Om,” it will count as a success on that ground alone. On its own merits, it has some wildly fun dance sequences, some funny bits, and an impressive roster of mainstream Bollywood talent. It's a shame that those positives can't entirely outweigh the messy, lazy and dumb stuff that pads out the remainder of the running time. 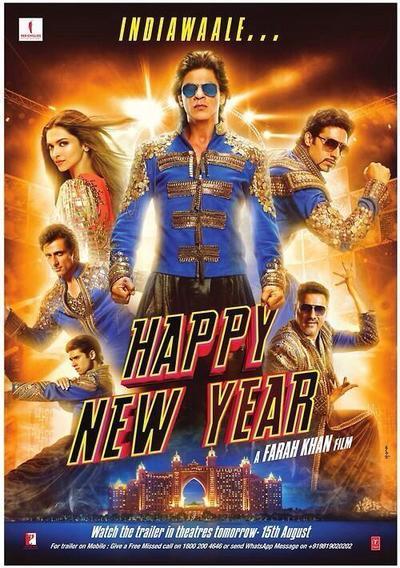