Tom and Janet have sex everywhere, all the time: in the shower, in the car, in the bathroom during a house party, in the stairway the instant they get home. But despite their insatiable passion, they’re not newlyweds. They’ve been married for 14 years and still crave each other as if they were in the giddy, early days of romance. They not only lust each other, they genuinely like each other. They rarely fight, and if they do have a disagreement, they smooth it over quickly and sincerely. They also happen to be great-looking and live in a gorgeous house.

No wonder all their friends hate them.

But Tom and Janet find their impossible bliss challenged when a mysterious stranger shows up with an odd proposition in “Happily,” writer/director BenDavid Grabinski’s feature filmmaking debut. What he’s trying to do here in mixing genres and tones is really tricky, and it only works sometimes. This is an ‘80s-style, high-concept thriller with modern-day technology and social mores. It’s a dark comedy that gives way to tense drama and eventually horror—or at least, it aims to do that. There’s a surreal, dreamlike quality throughout, with bursts of violence and bad behavior. But while Grabinski certainly deserves credit for his ambition, the juggling act he’s attempting gets away from him, and “Happily” ultimately ends up being more frustrating than dazzling.

His film features style for days, though, and it boasts a terrific, eclectic cast, from stars Joel McHale and Kerry Bishe to supporting players including Stephen Root, Paul Scheer, Kirby Howell-Baptiste and Charlyne Yi. But then it strands too many of these talented actors with woefully little to do in unappealing and underwritten roles.

Still, at the film’s center, McHale and Bishe have a sexy, playful chemistry as Tom and Janet. The slow-motion sequence at a sleek soiree in which Grabinski introduces us to them—and their flirtatious connection—suggests a level of self-aware fun that steadily dissipates in time. (The song that’s playing at the party, “I Still Believe” from the “The Lost Boys” soundtrack, is one of many ‘80s and ‘90s movie references scattered throughout; none of them make that much of an impact, but their randomness suggests they’re personal favorites.)

The fact that they’re still so into each other disgusts their friends at the party, including the less-happily married couple Karen (Natalie Zea) and Val (Scheer). Tom and Janet are so annoyingly perfect that their friend group disinvites them from a getaway weekend at a luxurious rental house before eventually re-instating their invitation. The confusion contained within this back-and-forth makes the plot feel needlessly complicated, but it does become somewhat relevant as the story unfolds.

Because in the midst of all that, an unassuming stranger knocks on Tom and Janet’s front door. As played by Root, he’s wearing a suit, carrying a briefcase and offering an unusual proposal that involves life-changing money. His arrival also complicates matters and will have reverberations throughout the story.

Tom and Janet try to forget about him, though, as they drive up to the minimalist, modern mansion they’re sharing with the friends who don’t really want them there. Which begs the question: Why would they even go? And as we get to know the folks in this group, it makes us wonder: Why do they hang out with these people in the first place? There’s little joy or genuine connection between any of the individual couples or the group as a whole. Besides Karen and Val, there’s high-energy Patricia (Natalie Morales), who found the house online, and her surly husband, Donald (Jon Daly); the no-nonsense, lesbian power couple Carla (Shannon Woodward) and Maude (Howell-Baptiste); and the least developed of all, Richard (Breckin Meyer) and Gretel (Yi). He likes to do puzzles and she eats a whole bag of weed gummies, and these are basically the traits that have been assigned to them.

“We’re gonna have a killer weekend!” Patricia enthuses as everyone shows up and the booze starts flowing. Somehow, these 10 people consume every drop of alcohol in the house, necessitating a booze run to the local market, but not a single one of them seems remotely buzzed. We’re meant to believe that secrets are emerging and resentments are bubbling to the surface over the course of the evening, but no one really changes and nothing truly revelatory occurs. Or if we do learn something potentially shocking about these characters, it doesn’t startle us the way Grabinski intended because we never really knew these people. The second half of “Happily” isn’t nearly as interesting as the first, and once we realize what’s actually happening in this house, it’s such a contrivance that it takes us out of the story wondering whether it’s even possible at all.

What was interesting—and remains so, despite the film’s flaws—is the idea of exploring how to keep a marriage exciting, intimate, and alive after so many years together. There’s something to that element of Tom and Janet’s experience—and the notion that perhaps you can never truly know someone as well as you think you do—that might have been more thrilling and terrifying than anything that goes down in the film’s menacing McMansion. 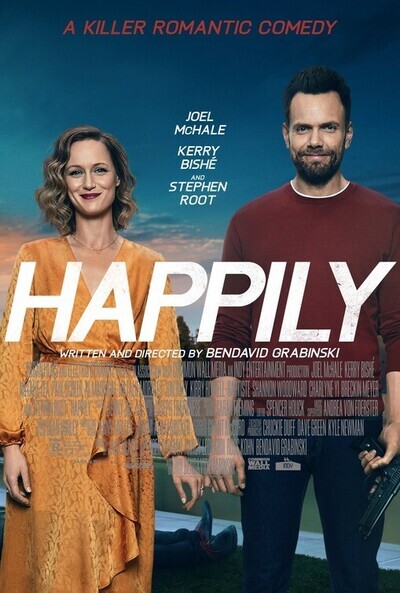