My feeling about David Gordon Green’s reboot of “Halloween” in 2018 was that the talented director fundamentally misunderstood what worked about the John Carpenter original, draining the project of actual tension, despite a few solid set pieces. Having seen his follow-up, “Halloween Kills,” I think I was right. This film muddies its entire concept with a bizarre, unrefined commentary on mob mentality that is quite simply some of the worst material in either Green’s career and the history of this rocky franchise (which is saying something if you’ve seen, say, "Halloween 5: The Revenge of Michael Myers"). It’s a shame too because, once again, there are set pieces that work—and the ones here are particularly brutal—but campy dialogue that calls attention to itself, too much fan service in the references department, sidelining Laurie Strode herself for most of the project, and truly inconsistent characters lead to a final result that definitely doesn’t kill. It barely even wounds.

In what feels like a clear nod to the first sequel, “Halloween Kills” picks up immediately after the end of the 2018 film (and it’s also probably not coincidental that most of it takes place at Haddonfield Memorial Hospital). However, it opens by introducing a few new/old characters—familiar names for fans of the Carpenter films but new to the Green ones. The most prominent is Tommy Doyle (Anthony Michael Hall), the kid that Laurie was babysitting on that fateful night in 1978. He gets together with fellow survivors every year, including Lindsey Wallace (Kyle Richards, reprising her role from the 1978 original), Marion Chambers (Nancy Stephens, also from the first two movies), and Lonnie Elam (Robert Longstreet, not in the Carpenter movie, but the character is). They’re getting together on Halloween to celebrate surviving four decades after the most traumatic night of their lives, but they’re really set up as future victims for anyone who has ever seen a horror movie (which is, based on their behavior, absolutely no one in Haddonfield).

Meanwhile, across town, Cameron (Dylan Arnold) stumbles upon the bleeding body of Deputy Hawkins (Will Patton), who is rushed to the hospital, where he will eventually share a room with Laurie Strode (Jamie Lee Curtis). As the two reminisce and recover, Michael Myers escapes the burning house from the end of the first film and begins a truly brutal rampage. On that note, “Halloween Kills” is a much darker film than the last one, filled with more than a dozen of what slasher fans used to call “quality kills.” As Myers makes his way across Haddonfield, Laurie’s daughter Karen (Judy Greer, at least given a bit more to do here than last time) tries to stop Laurie’s granddaughter Allyson (Andi Matichak) from joining the mob formed by Tommy to track him down. As they chant “Evil dies tonight,” they make, shall we say, some mistakes.

On that point, Roger Ebert wrote the following about the first “Halloween II” back in 1981: “The plot of 'Halloween II' absolutely depends, of course, on our old friend the Idiot Plot which requires that everyone in the movie behave at all times like an idiot.” It’s almost as if co-writers Green, Danny McBride, and Scott Teems had this quote on a whiteboard in the writer’s room because this is the aspect they get the most right when it comes to being faithful to the first two movies. Everyone in “Halloween Kills” is wildly idiotic, whether it’s the mob formed too easily by Tommy, the common trope of victims who know there’s a killer on the loose investigating the thump upstairs instead of just running, and some truly boneheaded decisions in the final scenes that really stretch credulity. The truth is that when a film like “Halloween Kills” is working, audiences will ignore the “Idiot Plot.” It’s only when they’re not invested that it becomes a problem, and that’s the case here.

There are brief moments when the craft here does make the Idiot Plot easier to ignore. Michael Simmonds shoots the film with a fluid viciousness, and the editing by Tim Alverson allows things like burst jugulars and smashed heads to linger. It’s a little surprising that the film is being released on Peacock so quickly because it’s really the kind of thing that works best with an audience, preferably at midnight, cheering each new murder.

Although I suspect even the hardcore fans of the last Green film would be disappointed even in a crowd. The biggest difference between the visions of Carpenter and Green comes down to momentum. The first “Halloween” is lean and mean, whereas this movie can’t maintain focus for longer than a few minutes, and so it tries to use cheesy, overheated dialogue to impart seriousness that the pace lacks. In particular, Laurie’s monologues are a mish-mash of nonsense about unstoppable evil. And fans will be truly sad that she barely leaves the hospital or even impacts the plot, which is a baffling decision given how much fans of the last film praised Curtis’ return, seeming to tie Myers and Strode together before untying them here.

“Halloween Kills” follows the classic sequel formula of “Again, But More of It.” There are more kills, more characters, more references, and more general chaos. However, all of it keeps pulling the movie away from the story of a bogeyman who came to life and became something else entirely. We have seen so many variations on Michael Myers over the years from Carpenter’s to Rob Zombie’s to all of the various sequels in between those two filmmakers. I’m most startled that an undeniably talented director like David Gordon Green made, barring an impressive recovery in the already-greenlighted “Halloween Ends,” what will be one of the franchise's most forgettable. 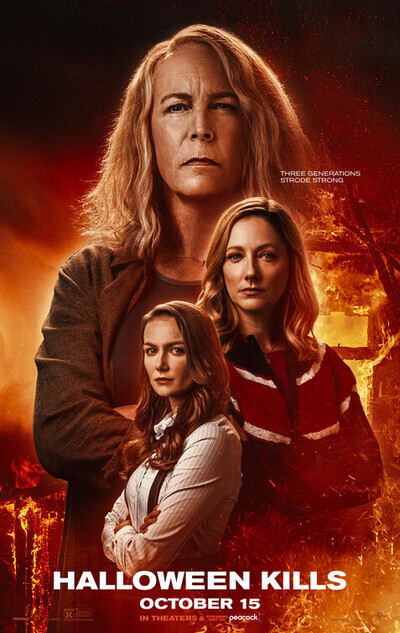 Rated R for strong bloody violence throughout, grisly images, language and some drug use.

Will Patton as Frank Hawkins