Uncertain what story it's telling, Nabil Elderkin’s “Gully” is only held together by the sheer talent of its young cast. Kelvin Harrison Jr. (“Luce”), Charlie Plummer (“Lean on Pete”) and Jacob Latimore (“Sleight”) are three of the most interesting performers of their generation. Add in a supporting cast that includes the great Jonathan Majors (“The Last Black Man in San Francisco”), along with veterans like Terrence Howard, John Corbett, and Amber Heard, and “Gully” feels like it should at least be interesting. It barely is. Around 50 minutes in, I realized I was waiting for the movie to really get started and realizing that it probably wasn’t going to do so. It’s a film filled with half-hearted ideas and thin characters, all in the service of a story that wallows in its trauma in a manner that gives it little purpose. In a sense, it’s about cycles of violence that lead to inevitable tragedy, but it has too little thrust to make that feel interesting or original other than the hope that you can’t wait to see these talented young people make something better.

Jesse (Harrison) narrates “Gully” with overwritten voiceover that constantly pulls from any attempts at realism. (Why Jesse is narrating a story he only knows parts of is a question likely never asked by writer Marcus J. Guillory, but it’s only one sign of a script that doesn’t quite hold together.) Jesse tells his story of trauma and abuse, along with how it intersects with those of his two friends Calvin (Latimore) and Nicky (Plummer). All three young men come from broken, violent pasts, and recent revelations push them into a wave of violence, almost as if Guillory and Elderkin are making a modern variation on “A Clockwork Orange,” asking what happens when young men who have been raised in brutal worlds end up unleashing that pent-up brutality on everyone around them.

At first, “Gully” almost seems to be pointing a finger at video game culture. As the guys head out on their rampage, Elderkin pops up video game images out of something like “Grand Theft Auto V,” indicating on screen how many pills the guys just jacked and how they have now reached a new “rank.” Like so many elements in “Gully,” this concept is underdeveloped thematically and then barely utilized. “Gully” becomes a story of randomly connected acts of violence. The guys follow a couple after a road rage incident and terrorize them in their home. They rob tourists. They enact vengeance on someone who has been abusing Jesse. None of it adds up to much. None of it has any weight. Is that the point? These lives of violence continue to breed violence? Too much of “Gully” is either unfocused or overwritten. It’s a film that’s either underlining its themes—especially through a “wise homeless man” played by Howard—or unable to figure out what it’s trying to say at all.

Sadly, “Gully” is also visually slight, which is especially disappointing given Elderkin’s music video background. He’s been one of the most impressive artists in the form over the last decade or so, helming “Grenade” by Bruno Mars, “Pyramids” by Frank Ocean, “All of Me” by John Legend, “Two Weeks” by FKA Twigs, “DNA” by Kendrick Lamar, and many, many more, including clips by SZA, Travis Scott (who helped produce and appears briefly in “Gully”), Vince Staples, and The Weeknd. Usually working with these artists more than once, his videos have the kind of vision that melds art forms, translating and shaping music into a different craft. None of that confidence comes through in “Gully,” which one can only assume was chopped up in post-production as it lacks the fluidity and craft of Elderkin’s work. Perhaps it’s evidence that what works in short form doesn’t always in long, but the track record of great music video directors who made the leap to features is extensive and I still hope Elderkin can make that leap.

It’s just not going to happen with “Gully.” Still, one feels like this could be an interesting minor footnote in a major career or two, given its cast of future stars. Majors, Harrison, Plummer, and Latimore could potentially become household names, and I can't wait to see what they do next. Everything that’s remotely interesting about “Gully” comes from how hard these young actors work to add richness and depth to a project that constantly has no idea what to do with their talent.

Now playing in select theaters and available on digital and on demand on June 8. 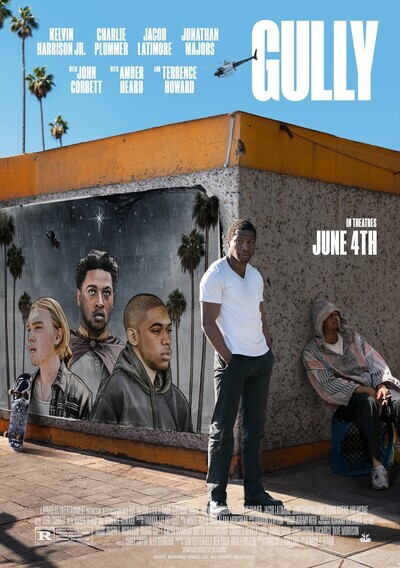