When I was small I liked to go to the movies because you could find out what adults did when there weren't any children in the room. As I grew up that pleasure gradually faded; the more I knew the less the characters seemed like adults. Ernst Lubitsch's "Trouble in Paradise” reawakened my old feeling. It is about people who are almost impossibly adult, in that fanciful movie way -- so suave, cynical, sophisticated, smooth and sure that a lifetime is hardly long enough to achieve such polish. They glide.

It is a comedy for three characters, plus comic relief in supporting roles. Herbert Marshall plays a gentleman jewel thief, Miriam Hopkins plays the con-woman who adores him, and Kay Francis is the rich widow who thinks she can buy him but is content to rent him for a while. They live in a movie world of exquisite costumes, flawless grooming, butlers, grand hotels in Venice, penthouses in Paris, cocktails, evening dress, wall safes, sweeping staircases, nightclubs, the opera and jewelry, a lot of jewelry. What is curious is how real they manage to seem, in the midst of the foppery.

The romantic triangle was the favorite plot device of Lubitsch. The critic Greg S. Faller notes that the German-born director liked stories in which "an essentially solid relationship is temporarily threatened by a sexual rival.” Here it's clear from the beginning that the gentleman thief Gaston Monescu (Marshall) and the lady pickpocket Lily Vautier (Hopkins) are destined for one another -- not only because they like each other, but because their professions make it impossible to trust civilians. When Gaston meets Mariette Colet (Francis), it is to return the purse he has stolen from her and claim the reward. She is attracted to him, and he gracefully bows to her lust, but there is an underlying sobriety: He knows it cannot last, and in a way so does she.

The sexual undertones are surprisingly frank in this pre-Code 1932 film, and we understand that none of the three characters is in any danger of mistaking sex for love. Both Lily and Mariette know what they want, and Gaston knows that he has it. His own feelings for them are masked beneath an impenetrable veneer of sophisticated banter.

Herbert Marshall takes ordinary scenes and fills them with tension because of the way he seems to withhold himself from the obvious emotional scripting. He was 42 when he made the film, handsome in a subdued rather than an absurd way, every dark hair slicked close to his scalp, with a slight stoop to his shoulders that makes him seem to be leaning slightly toward his women, or bowing. His walk is deliberate and noticeably smooth; he lost a leg in World War I, had a wooden one fitted, and practiced so well at concealing his limp that he seems to float through a room.

He gives a droll, mocking richness to the dialogue by Samson Raphaelson, Lubitsch's favorite collaborator. He seems to know he's in a drawing room comedy, and the actresses speak in tune with him. There are exchanges so teasing that they're like verbal foreplay. Consider the early scene in which Gaston, having stolen some jewels, returns to his hotel suite to host a private dinner for Lily. He poses as a baron. She poses as a countess.

"You know,” says Lily, "when I first saw you, I thought you were an American.”

"Someone from another world, so entirely different. Oh! One gets so tired of one's own class -- princes and counts and dukes and kings! Everybody talking shop. Always trying to sell jewelry. Then I heard your name and found out you were just one of us.”

And they kiss. But soon it is revealed that they have both been busily stealing each other's possessions. She has his wallet, he has her pin, and it's like a game of strip poker in which, as each theft is revealed, their excitement grows, until finally Lily realizes she has been unmasked by another criminal, and cries out, "Darling! Tell me, tell me all about yourself. Who are you?”

He is one of the boldest thieves in the world. He meets Mariette (Francis) by stealing her diamond-encrusted purse and then returning it. He insinuates himself into her trust, advising her on lipstick and on her choice of lovers (of course he has read the love letter in the handbag). The dialogue is daring in its insinuations:

"If I were your father, which fortunately I am not,” he says, "and you made any attempt to handle your own business affairs, I would give you a good spanking -- in a business way, of course.”

"What would you do if you were my secretary?”

Turn up the heat under this dialogue, and you'd have screwball comedy. It's tantalizing the way Lubitsch and his actors keep it down to a sensuous simmer. In the low, caressing tones of Marshall and Francis, they're toying with the words -- they're in on the joke. And Mariette is neither a spoiled rich woman nor a naive victim. She is a woman of appetites and the imagination to take advantage of an opportunity. She probably doesn't believe, even then, that this man is who he says. He has a way of smiling while he lies, to let his victims have a peek at the joke. But Mariette is an enormously attractive woman, not least because of her calm self-assurance, and he likes her even as he deceives her.

Their first meeting is a splendid example of "the Lubitsch Touch,” a press agent's phrase that stuck, maybe because audiences sensed that the director did have a special touch, a way of transforming material through style. What happens, and you are surprised to sense it happening, is that in a drawing room comedy of froth and inconsequence, you find that you believe in the characters and care about them.

Ernst Lubitsch (1892-1947), short, plain, cigar-chewing, beloved, was born in Berlin, was on the stage by the time he was 19, worked as a silent film comedian, and in 1915 began to direct. His silent films often starred Pola Negri, who played Madame DuBarry in "Passion” (1919), which made their reputations in America. Mary Pickford brought him to Hollywood in 1923, where he quickly became successful; his best silent films include a version of Oscar Wilde's "Lady Windermere's Fan” (1925) that the critic Andrew Sarris argues actually improves on the original ("it seems incredible”) by dropping Wilde's epigrams, "which were largely irrelevant to the plot.”

Lubitsch ruled at Paramount in the late 1920s and 1930s (he was head of the studio for a year), embracing the advent of sound with a series of musicals that often starred Jeannette Macdonald. "Trouble in Paradise" is generally considered his best film, but there are advocates for his version of Noel Coward's "Design for Living" (1933), with Gary Cooper, Fredric March and Miriam Hopkins; "Ninotchka" (1939), with Garbo, a definitive adult; "The Shop Around the Corner" (1940), with James Stewart and Margaret Sullavan as bickering co-workers who don't realize they're romantic penpals; and "To Be or Not to Be" (1942), with Jack Benny and Carole Lombard in a comedy aimed squarely at Hitler.

Because "The Lubitsch Touch” was coined by a publicist, no one, least of all Lubitsch, ever really defined it. It is often said to refer to his fluid camera. Watching "Trouble in Paradise,” what I sensed even more was the way the comic material is given dignity by the actors; the characters have a weight of experience behind them that suggests they know life cannot be played indefinitely for laughs. Andrew Sarris, trying to define the Touch, said it was "a counterpoint of poignant sadness during a film's gayest moments.” Consider the way Gaston and Mariette say goodbye for the last time, after it is clear to both of them that he loved her, and stole from her. How gallantly they try to make a joke of it. 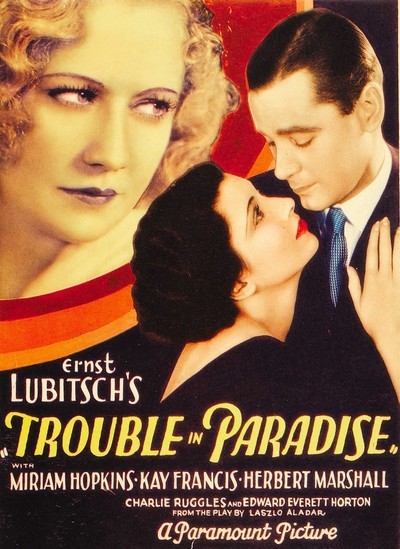